Day 3 Zion National Park to Bryce Canyon
Mileage 111 Miles, States – Nevada, Utah
What a spectacular day! This post is all about the photos because no amount of describing stupendous red rock gorges and amazing geological structures can do the day justice. Last night we managed to get the second last room in the Quality Inn and judging by the “No Vacancy” and “campsite full” signs possibly one of the last places to crash in Springdale. Hardly surprising since it was a Friday night and 7pm. Springdale, Utah, was a happening little place with a really nice vibe that we had not expected to find so close to a National Park. (We are used to the remote snobbery of Yosemite!)
We began Saturday by taking the shuttle bus into Zion Canyon. Cars are not permitted into the canyon from March to October (Sounds like a title of a book, right?). Our trip is more of a scouting mission. If we like a place we’ll try to make it back to do the detailed stuff such as longer hikes, (and chilling out) but for now it was the glance and click tour – for the most part.
Zion Canyon was beautiful – kind of a smaller and redder version of Yosemite. The buses were really regular, and we were very impressed with how organized the place was. 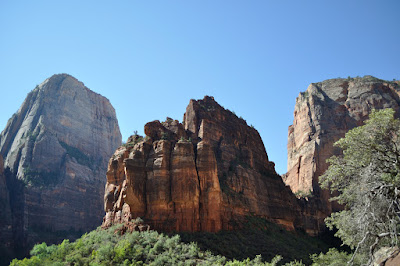 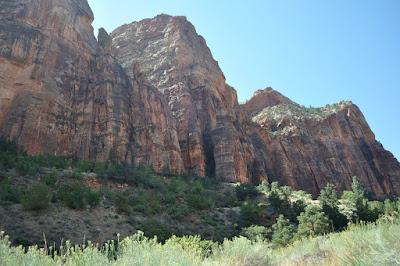 By 1pm we were back on the road for the relatively short hop to Bryce Canyon. The drive continued to thrill us with its scenery. I don’t know how My Husband managed to actually concentrate on the driving. 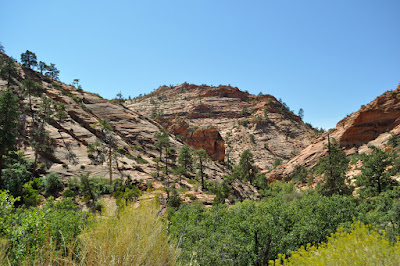 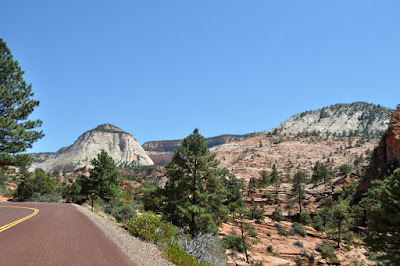 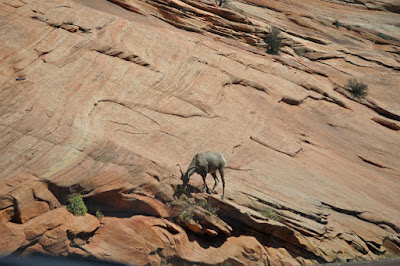 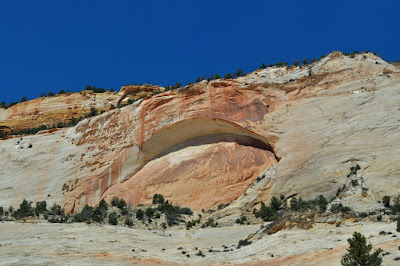 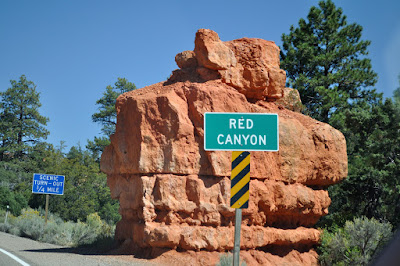 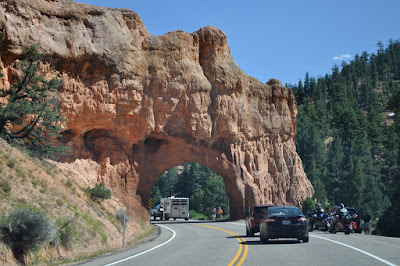 Mesas are elevated areas of land with a flat top and sides that are usually steep cliffs. Mesa is Spanish for table. 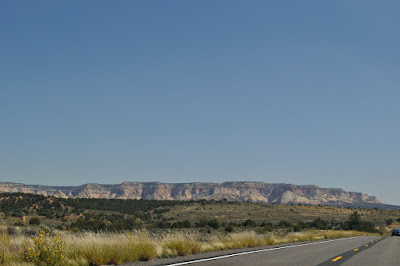 Basically, they are the little cousins of plateaus, complete with meadows, and what looked liked nice farmland. Once up here you couldn’t see the canyons below and it looked like a different world. 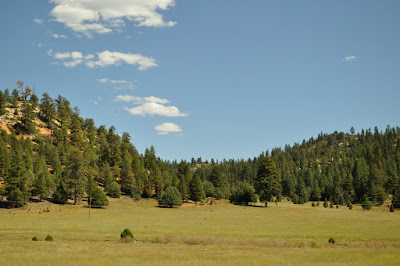 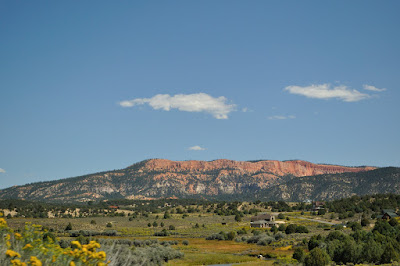 I’d heard great accolades of this Bryce Canyon, claims that it was better than the Grand Canyon, claims I’d found hard to believe, but, oh boy, this big ole hole in the ground did not disappoint! Actually, it isn’t really a canyon, rather the eroding edge of a plateau. However, as literature at the visitor center points out, Bryce Eroding Edge of Plateau doesn’t fit easily on a Tee Shirt, so Bryce Canyon it is. 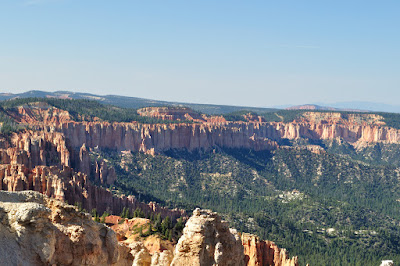 It allowed us to get up close and personal to the hoodoos. 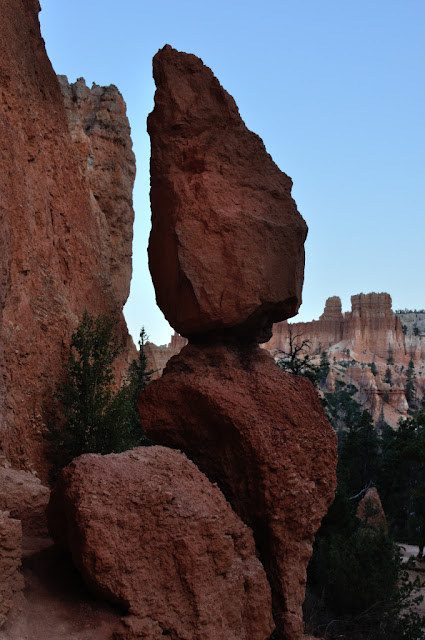 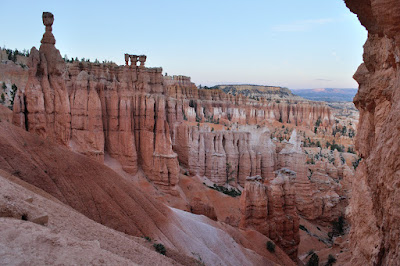 At 4pm we got one of the last campsites in Sunset Camp, actually in the park. The whole tourist industry here seems much “kinder” than in California, where it feels like the top spots are always full, and there are fewer places to stay in the places you most want to. Here everything flowed into place, even though we did not  make a single booking. Traveling in September helped. 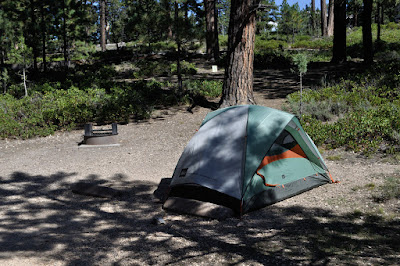 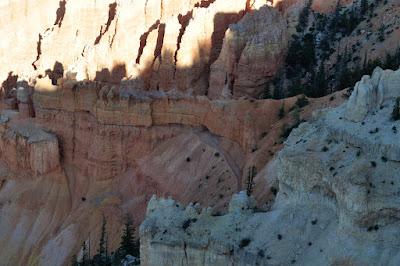 At certain points you can reconnect with the shuttle and stop there, returning the next day where you left off. This might take a week or more! 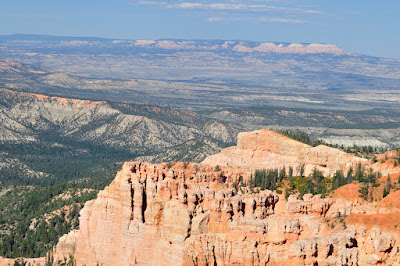 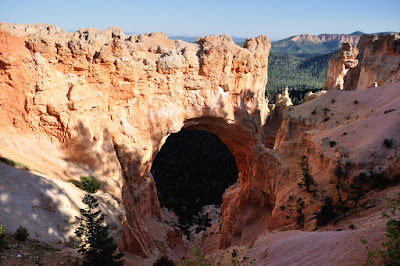 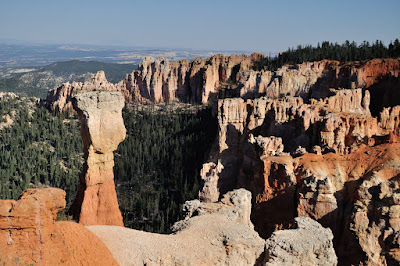 We ended up at Sunset Point for sunset. 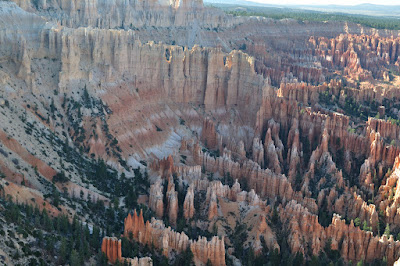 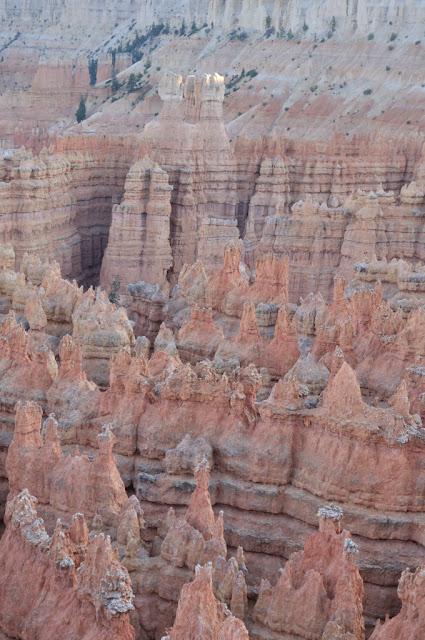 One short trail beckoned. “The Navajo Loop Trail – 1.6 miles.” The sign pointed straight down into the red canyon below.

“Let’s just go down it a little bit, get a taste of it!” We told each other. So off we went, no food, water nor map! (Typical Lee hiking adventure…) At least I wasn’t wearing flip flops and a pink mini-skirt this time…like that time in Death Valley, in July 2005…but that’s another story!
This canyon went straight down for a half mile (and obviously straight up for the same.) 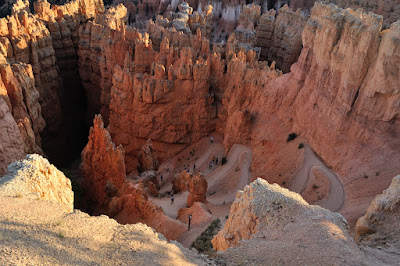 It was glorious, like nothing I’ve ever seen before. 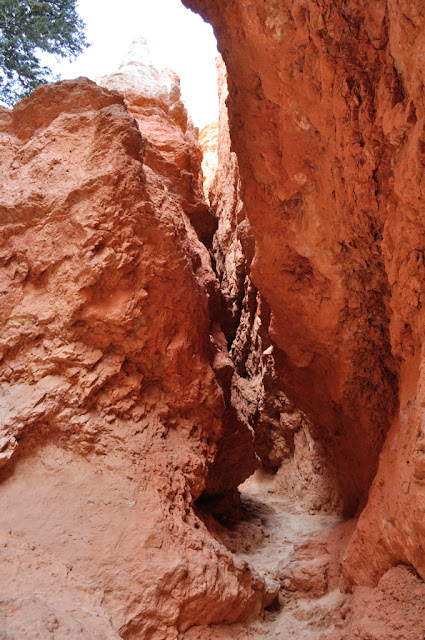 I officially declare that the Navajo Loop Trail is a MUST DO. Take it slowly if you need to, and do bring water, and maybe you shouldn’t embark upon it as the sun is setting!
It was a very happy couple that sat watching the Milky Way outside our tent before we hit the hay. 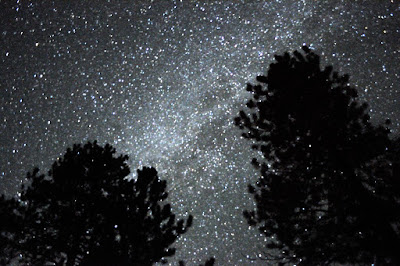 As I drifted off to sleep, I looked forward to more exploring tomorrow and gave thanks for having the chance to do trips like these.
Byddi Lee
Filed Under : Bryce Canyon, Hoodoos, Legend People, Mesas, Zion National Park