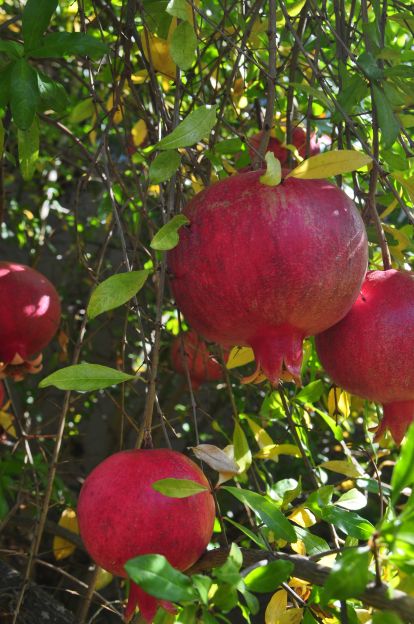 I'd never even seen a pomegranate until the Autumn of 1997. Granted that is 14 years ago, but to me it still feels relatively recent.

Then, when we moved into this house, pomegranates were the first things that we harvested from our garden.  You know it's time to harvest again when you see the red fruits amid the yellowing leaves.

Pomegranate popularity practically exploded when anti-oxidants became the big thing. They are good for your heart, a great source of vitamin C, in fact, there are a gazillion good reasons to go through the tedious process of seeding them if the taste alone doesn't grab you. So whats not to love?

The staining factor for one!  Last year my Mum was visiting during pomegranate season. She  loved to prepare them for My Husband to eat because traditionally, Irish mothers do not believe that men can do anything for themselves with respect to food, and in extreme cases, with respect to anything at all. It explains a lot about our culture!

It was dark outside, so the white kitchen blinds where pulled. I was preparing veggies for dinner on our white Hanstone counter top. Mum was scared to squirt red pomegranate juice on the white leather chairs at the dining table, so she set up shop in the kitchen sink. Things were awfully quiet as we each bend our heads concentrating on our tasks. Until I glanced over at Mum and shrieked (in a totally Ned Flanders kind of way)!

The kitchen sink was right below the window and the blind resembled a scene from CSI, with pomegranate spatter halfway up the once immaculate white blind. Poor Mum was so upset.

"Don't worry, it will wash off," I said as I scrubbed at the blood red spots with a damp dish cloth, trying to keep upbeat and cheerful. "All this white stuff is amazingly resilient."

The red spots were turning a mauve grey color, something similar to the tone in my stricken Mums face! Was it only a matter of time before she'd recover and launch into a lecture on my color choices for my furniture and decor?

But to give Mum her due she just contined to apologise and accepted responsibility for the mess. This was harder for me to deal with than the "Well, what do you expect when you have all this white stuff?" line of defense.

I felt so bad for her being upset that I brushed it off and laughed, saying something along the lines of, "That's payback for all the times I spilled stuff growing up." But I couldn't even bring a specific example to mind. And then I realized that it was not because I hadn't spilled anything but that I didn't have a memory of her making me feel bad about it, though I'm sure she might have scolded me at the time.

The spots dried out a pale, barely noticeable grey. And we forgot about it. I figured that someday I'd get around to replacing that blind or cutting off the damaged part.

Today as I washed a pomegranate in the sink I looked at the white blind, and then I realized that it was white. The grey spots had completely faded - probably aided by the sun that blasts in there in the early mornings before we get up and pull the blinds. And I thought - that's what families should be like, mishaps occur but we move on so that the sheet gets wiped clean by forgiveness and acceptance. 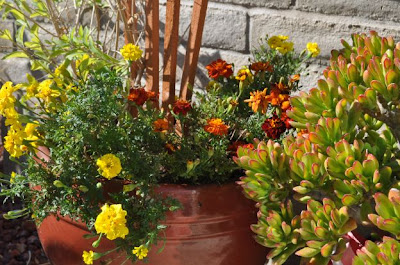 We gardeners are all Eco-managers. We take our piece of the planet and we accelerate, sustain and then abruptly halt natural ecological cycles. Even non-gardeners do this, though they may not pay as much attention to it. Take Mr Lawnlover for example:(I'm making this imaginary, yet stereotypical person, male because I'm female and it's my blog!)

Mr Lawnlover will sow grass seeds. He will create a mono-culture - a patch of ground that grows only one species (something which nature abhors nearly as much as a vacuum) thus decreasing habitat options for local wildlife. Then he will add fertilizer, usually way too much fertilizer, so that when he over-waters this piece of ground, (as he is sure to do) lots of fertilizer will get washed into the nearby streams, rivers and eventually the sea, causing a burst of plant life in these waterways that dies quickly and rots. This decomposition leads to oxygen depletion in that area and suffocates any animals living within that body of water. A lot of (scientifically ignorant) folk don't realize that fish do need oxygen even though they live underwater.

So, now that Mr Lawnlover has created a mono-culture and poisoned the water ways, what does he do when the grass actually grows? He cuts it and then throws away the cuttings of grass that he so lovingly nurtured to grow! I wonder what aliens observing our planet would think of that practice? Probably they'd put it on the shelf below the one containing such articles as "A study of humans strapping themselves to boards and sliding down mountains." This lower shelf would be labeled "Stupid Stuff That Isn't Fun."

In nature, the cycle would work like this - Grass grows, uses nitrates and other nutrients in the soil, some dies and releases the nutrients back. We could suggest to Mr Lawnlover that he mows his lawn and leaves the clipping on it, thus reducing the need for adding fertilizers (and drowning fish). The mono-culture issue would require a little more educating of Mr Lawnlover...

So how do we gardeners differ from Mr Lawnlover?

Some of us only differ in that we eat what we cut - i.e. harvest. A bed of lettuce is still a mono-culture. 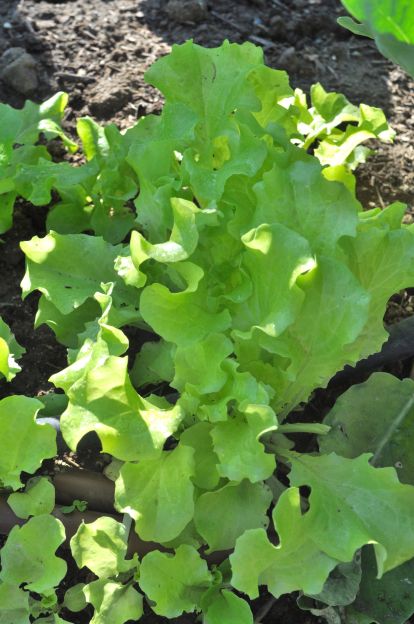 Even pretty "Sea of Red" lettuce. 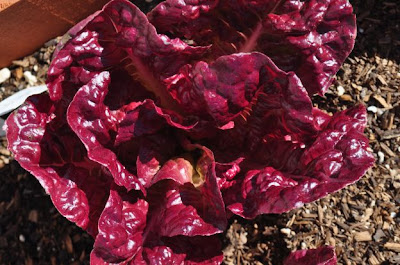 You could mix plants in together. 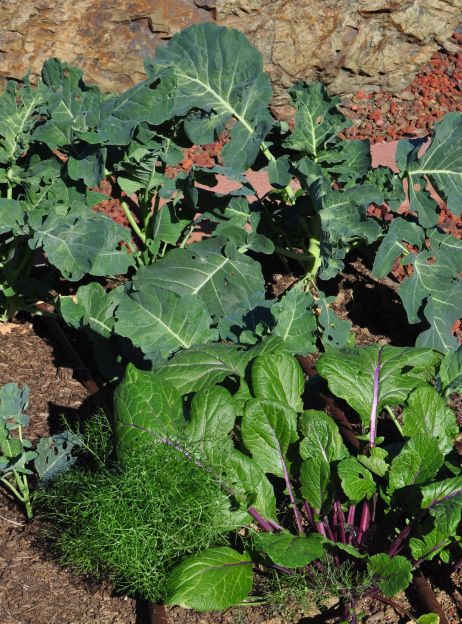 And it is good to have some that flower, like the arugula in the middle, so that insects can feed. This builds a food-chain from your crop to the insects, birds/lizards and eventually the top predators, like the kite which visits our yard from time to time. 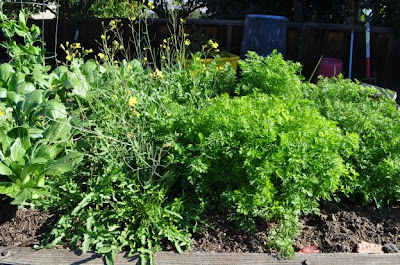 Better still, there is no rule that says you can't plant flowers alongside vegetables. Here are marigolds, sweet-potato and peas. 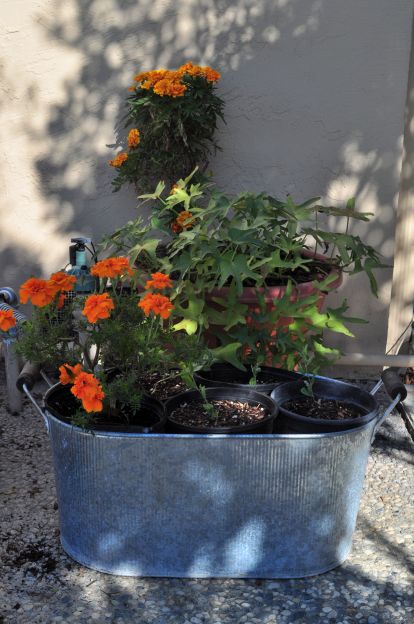 The bees love this cosmos that has been growing and flowering continuously for the last 20 months! 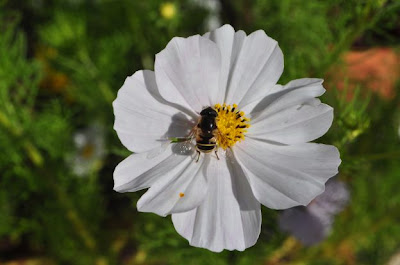 Sometimes we also have to be a little generous and not stress over the odd hole here and there in our broccoli. This (probably) caterpillar might someday be a beautiful butterfly. I can share. 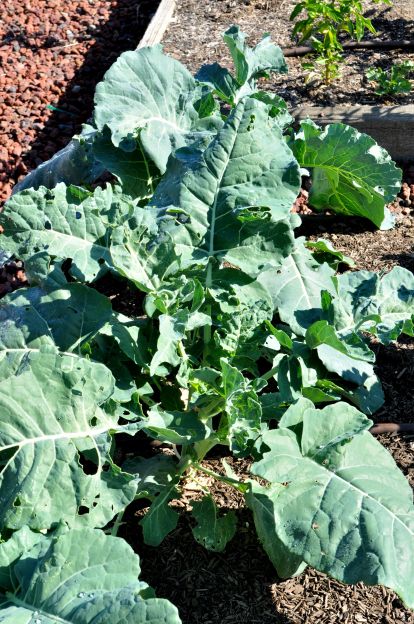 And to make these plants grow strong and green, we need to add fertilizer. Plants need nitrogen, as this is the building block of proteins, which in turn are the bricks that make cell structures, enzymes that drive chemical reactions in the cells, and hormones that send messages between cells. Without nitrogen nothing will grow. 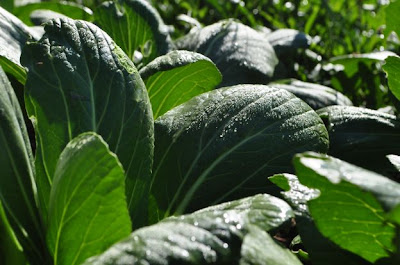 How fortunate that we exist in a sea of nitrogen, the air around us being composed of 78% nitrogen. BUT not so fast.... nitrogen as an element (i.e. not bonded to any other element) is no good to plants. It is too inactive as the molecules have gotten stuck together and like it that way too much to unglue - ungluing them and attaching them to another type of molecule like oxygen (thus making a compound) uses either lots of energy, (like heat) or special catalysts (like enzymes). Some soil bacteria provide those catalysts, but usually we need to add more nitrogen in compound form (ammonium, nitrates and nitrites) to the soil. The most environmentally friendly of these is manure from herbivores, especially local sources that cut down on the amount of fossil fuels used in transportation.

If you are making your own compost then you are not using fossil fuels or water (or a very small, insignificant amount of water) and you are helping the environment and saving money too. What's not to love?

Using compost made from our own kitchen scraps and yard clippings is as close to emulating the nitrogen cycle that exists in nature as we gardeners can probably get. Sure, you may have to add a little manure or other nitrogen compound source to replace what you've extracted especially at this time of the year, when temperatures cool causing chemical reactions in the soil and plant cells to slow down. Remember, as managers we're delegating. In my case, it's to the cattle that provide the manure!