I spotted him on Sunday, slinking across the yard, not looking anywhere but at the almond tree. As I flung open the back door, I roared as loud as I could, then ran out gingerly in my bare feet, waving my arms and trying to look ferocious. The squirrel merely sat up on two legs, front paws tucked into chest (was he casting his eyes?) and with a quick look back at the tree, flicked his tail and scampered much too nonchalantly up to and over the fence. I ow-owed my way back to the house, picking stones and debris out of the soles of my feet! 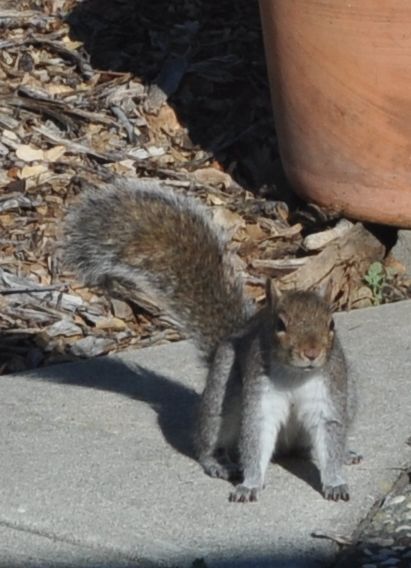 And where was squirrel patrol? Probably terrorizing some poor birds nest. I'm not a cat person. The three mangy moggies who make up squirrel patrol ignore me (at best) and I choose to let them walk hassle free in my yard so long as I see some benefit to me. So far the benefit has been a distinct lack of squirrels... until this morning.

This time last year the almonds were intact. But then I went to Ireland. When I got home three weeks later, all that was left was a pile of shells beneath the tree. 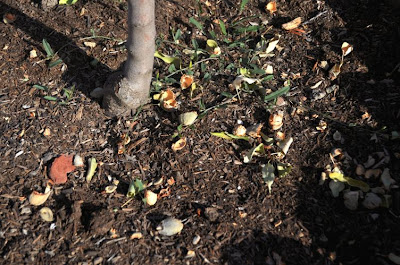 This year things are going to be different. I wrapped the tree up in a strong plastic net. 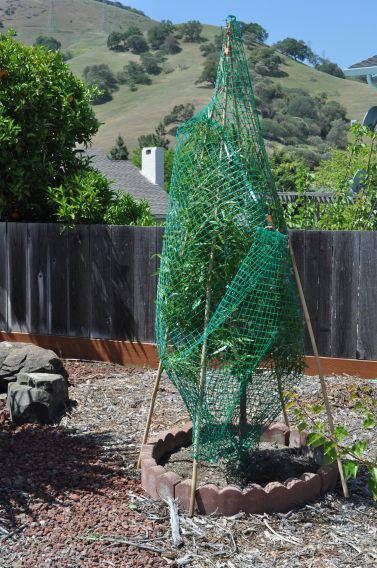 I made sure to secure it at the bottom so the squirrels could not get up the trunk of the tree. 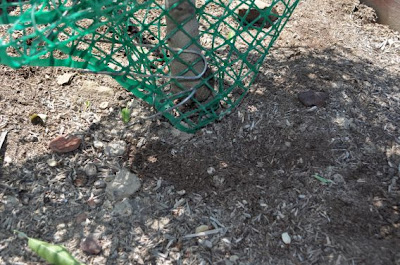 I do worry that the large mesh size will only help them climb up the tree and that they'll figure out how to put their arms in and still steal the almonds. But it's the best I can do - like many aspects of gardening - it's an experiment.

So for now the nuts are safe and looking squirrel-enticingly good. 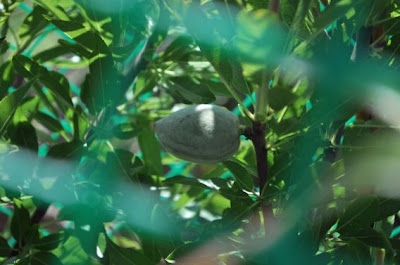 Now I've got to stop the squirrel patrol from pooping in my raised beds. So the backdoor is flung open and I go charging out when I see a cat in the yard. I really must remember to keep shoes by the backdoor!

Attack of the dog-vomit slime mold!

About two weeks ago I noticed a weird and disgusting-looking bright-yellow blob on the wood-chip mulch under the Douglas fir in my front yard. I've a pretty strong stomach. In fact, I'm usually the one who grosses other folk out just for the craic of it. But the thought of some poor animal being so ill as to have throw this up in my front yard was too much. I really hoped it wasn't one of the three rather mangy cats that have taken to patrolling the property this year. We call them the squirrel patrol, since we've seen less squirrel activity since they showed up.

Last year was the year of the rat, and the year before, the year of the snake. The snake left, the rats showed up and now we have the cats/squirrel patrol, and as much as I'd prefer to have the snakes back I do hate the thought of one of those moggies being that ill. I mean the blob was 10 inched in diameter and about an inch thick. (How do you spell the sound you make when you dry-retch? Probably good that I don't know!)

A rather more haunting thought was what if it was human vomit? Maybe some homeless guy? With some rare and dangerous disease? Yikes! It was with great trepidation that I opened the (always unlocked) garden shed that day. Thankfully it was empty. But I did steal myself for finding some sort of creature dead on the property for the next few days.

I invited Al (my neighbor) over to see if he could shed some light.
"A fungus," he guessed, until he touched it with his foot. Bright orange goop welled up. Al jumped back. I gagged. He laughed.  At long last I've found someone who can out-gross even me!

As we both wiped our eyes, (for entirely different reasons)  I decided to cover it with the surrounding wood-chip mulch so that my stomach could settle, though it heaved every time I even thought about the bright orange stuff squeezing out from beneath the yellow foamy crust.

Several day later I was wasting time on facebook, (as you do) and I came across a post by a Master Gardener buddy. She had posted a photo of something that looked like my blob and asked what it was. Another Master Gardener commented, "Slime mold."

I was so annoyed that I had covered up the one I'd found. Clearing the wood-chips away revealed it again, but it looked a little beat up. 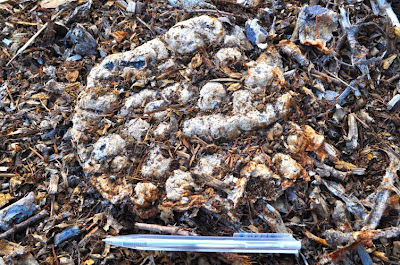 The pen was added to show scale, and remember this is it after it has dried out and shrunk a little.

So what is a slime mold?

Well, these thins are pretty amazing in a freaky Startrek kind of a way. First of all, they are not a fungus nor a plant but belong to the Phylum Amoebozoa. The slime mold is a bunch of single-celled organisms (amoeba) that have gathered together and act as a single organism called a plasmodium. Studies have show that there is some kind of communication between these individual cells such that they can co-ordinate themselves to move. Yes, I said, "Move!" Collaboration of this kind is of great interest to cell biologists and also transit providers! The latter study how the slime mold "hunt" down food, moving from one place to the next along the most efficient route.

They feed by engulfing their food. In the F. septica's (a much nicer name I'm sure you'll agree!) case rotten wood and bark. You can see a slime tail at one side of them that shows their direction of movement. And so, even though I have radically changed my stomach churning attitude towards these strange amalgamated-cell creatures, I wasn't overly happy that the direction of movement was towards the house!

Then yesterday, My Husband and I were out in the garden.  He was walking in front of me on the concrete path, and I happened to glance down and see another F. septica right by his foot.

Oblivious to it, he walked on, but I excitedly yelled, "There's another one." My raised tone must have translated as alarm to My Husband's ears. He quickly turned and came running back to me, stepping in the slime mold and skidding on it! Fortunately he didn't fall. I was torn between laughing at his banana-skin skid and being annoyed at him for wrecking my potential photo op (since I'd wrecked the last one!) I'm sure the slime mold was none too pleased either...

We photographed it anyway. 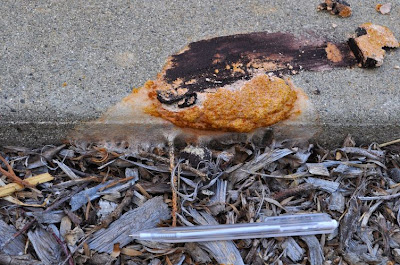 So, till next time, I'll say "Adios amoebas!"