You know it's been a wet winter in California when...

You have a plethora of mushrooms springing up all over your yard. 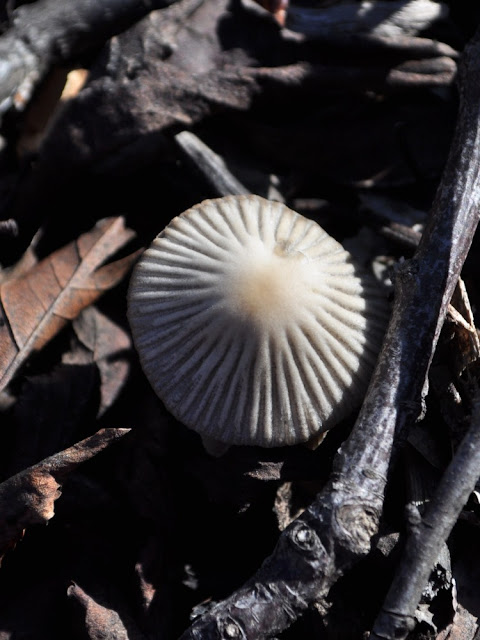 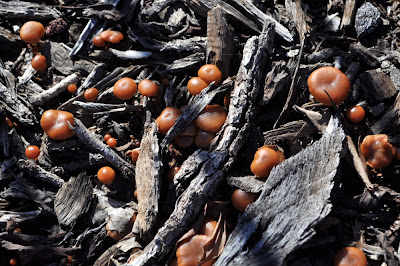 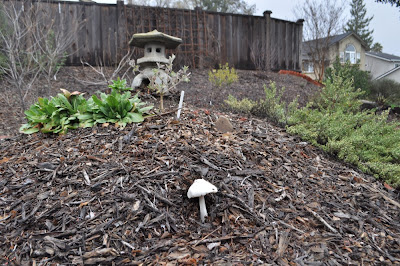 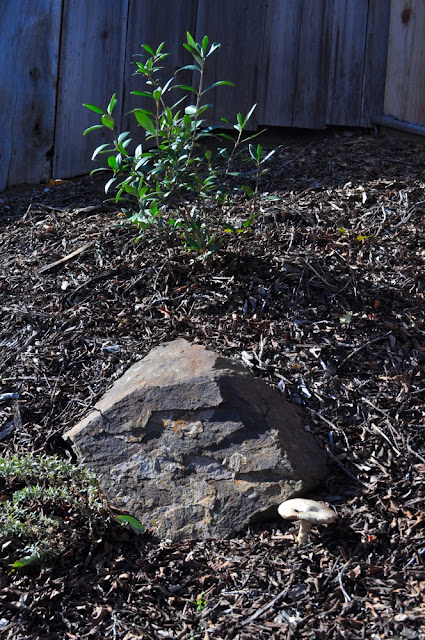 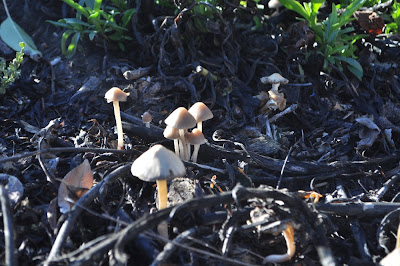 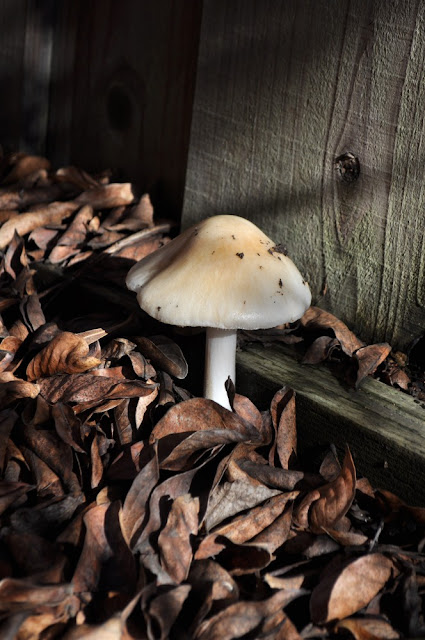 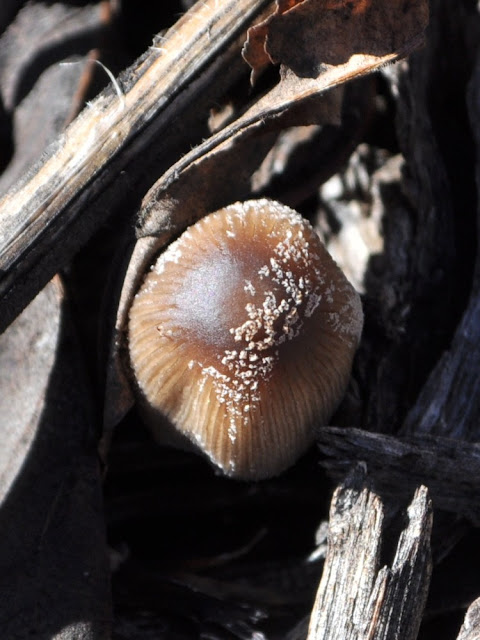 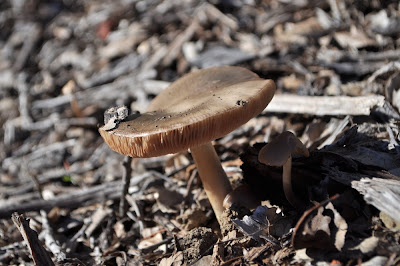 You realize you need to trade your car in for a hybrid, and you don't mean between gas(petrol) and electric. 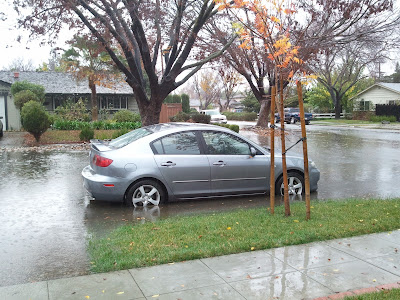 You run outside to make a rain-man. 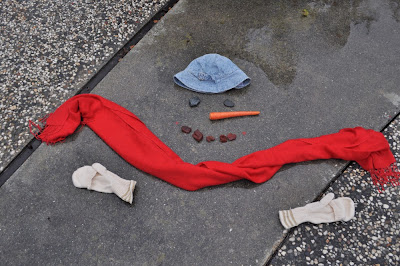 You've forgotten exactly how high the hills behind your house are. 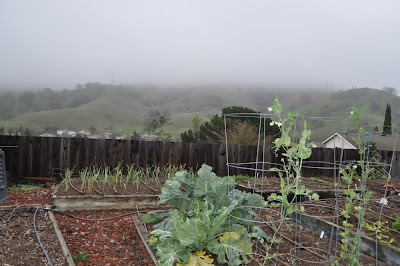 You've been in your garden so little that the squirrels have undertaken to plant their own bulbs outside their burrow in your wall. (Not kidding - they planted these daffodils...I don't know where the bulbs came from, but they didn't get them from my bulb garden...) 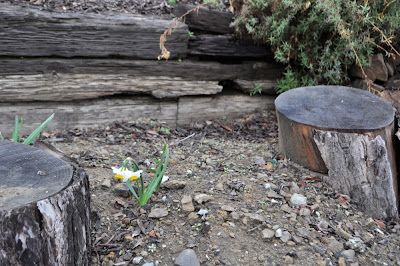 You wonder why you decided to install those solar panels this winter - yeah great timing! 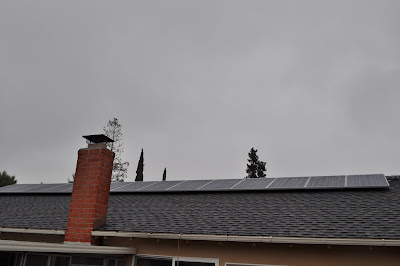 Your bulb garden is going gangbusters even though you can't remember the last time you applied water to your yard. 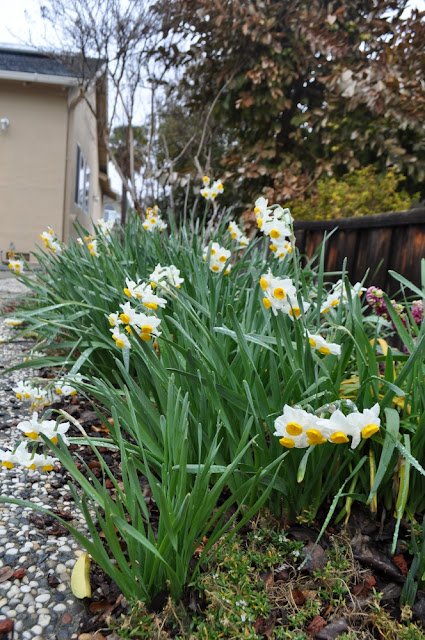 You know you will have a riot of poppies come April. 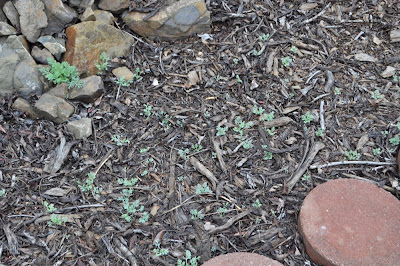 You go on vacation to Taiwan and get dryer weather! More to follow on that...

From mountain tops to the bottom of the deep blue sea

Hawaii is the land of heart-breakingly beautiful sunsets. What better place to view these sunsets than from the top of the world's highest mountain? Measured from base (under the sea) to top Manu Kea beats Everest. It peaks at 13,796 feet (4,205 m). The nice thing about Manu Kea is that you can drive all the way to the top ...kind of!

Parts of the road up to the peak are four wheel drive. Add to this the fatiguing effects on drivers of altitude, which may include headaches dizziness and nausea, compounded with the chance of snow -yes - snow in Hawaii. Well, we thought it prudent to book ourselves onto a tour with Hawaii Forest and Trail. The bus was okay, though not quite "luxury". The food (dished out at an old farm half way up) was basic and edible but not fancy nor with a scenic view in any way. The cost was painful! At $200 per person (I think that did include taxes) we could just as easily have hired a four wheel drive vehicle for the day...if we'd had the nerve to drive the thing at altitude, over snow...so instead we paid a total of $400 for being big scaredy cats. In fairness, we rarely do the bus tour thing, and I was looking forward to being looked after. The excellent driver/tour guide however saved the day. He was really well informed and enthusiastic about sharing that information.

We left Kona at 1pm and drove up and up and up. We stopped a few times for photo ops - each stop the view trumping the last, each stop forcing us to dig into our rucksac for another layer of clothes! We trawled through the climate zones, comparing visas to others we'd seen on our travels elsewhere on the planet. It's a running joke amongst some of my travel friends that everywhere looks, "Just like Donegal." To wit I posted a shot of Hawaii and one of Donegal on a friends facebook page asking him to choose which was Hawaii and he got it wrong!

Manu Kea plays host to all sorts of nerdy wonders.

There is the Really Long Baseline Array. A system of ten radio telescopes that has the sharpest vision of any telescope on earth. Apparently it is has such good resolution that you could read a newspaper in Los Angeles if you were standing in New York...though why you'd want to is beyond me...haven't these guys heard of the internet? 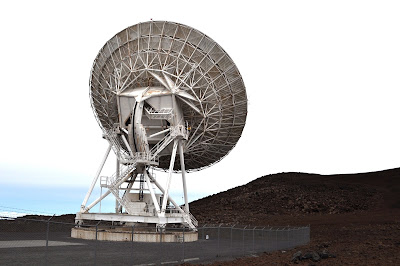 The silver sword fern grows on Manu Kea's high altitude slopes, so endangered now that there are high tech fences deployed to protect it from grazing sheep. Okay, so the fences are aren't as high tech as the toys the physics dudes have, but for biologists, well they're the bomb! 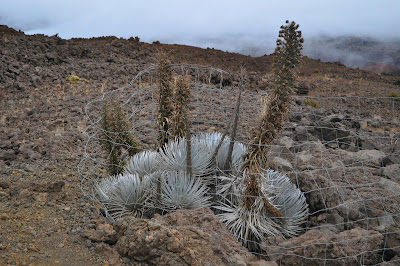 Nearer the top the temperatures really topple, and our heads felt light and somewhat woozy coping with the thin air. More huge telescopes line up like alien sentinels, eye/ears pricked searching the heavens as if hoping that ET will show up and take them home. 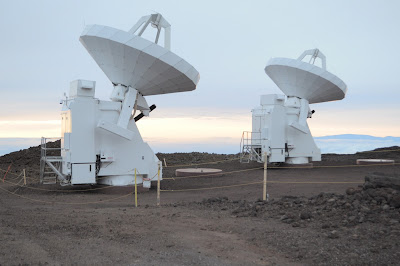 My physics degreed Husband loved it. As did I, were I not so cold! 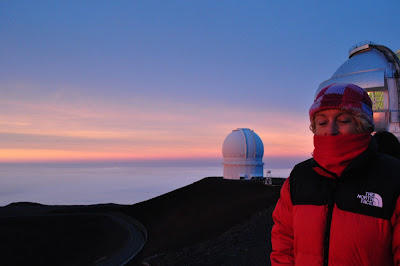 It was hard not to flood these posts on Hawaii with sunset shots. Each one screamed "pick me" but I didn't give in. You'll have to be happy with this. 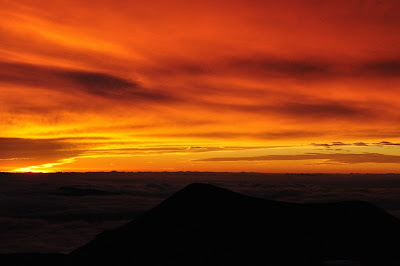 As the sun slid into a cauldron of clouds, we trundled back down to the 9000 feet mark to the visitor's center and our eyes turned skywards. They have over 300 nights of clear sky a year. Spectacular star gazing, due to the thin air at this altitude had been promised and the tour even sets up a portable telescope for us. However, we choose one of the under 65 occasions a year where the high clouds did not dissipate. I was bitterly cold and bitterly disappointed. I decided to look for the silver lining in that cloud and just be thankful and happy that I was there, that I could come back some day, hire a 4WD and do the trip at least as far as the visitors center to see the clouds without having to sink $400 into it. Our tour guide did a spectacular job of telling us about the stars anyway, drawing them with his laser pen on the side of the building!

While in Kona, we stayed at King Kamehameha's Kona Beach hotel. It was the perfect spot, right on the beach, right in the town. They served breakfast right by the beach. I was in heaven. I wanted somewhere that I could go for a quite swim every morning without us having to get in the car and drive somewhere. From our room we could see the evening lu'au. We didn't get a chance to go to one so it was kind of nice to watch from our balcony. 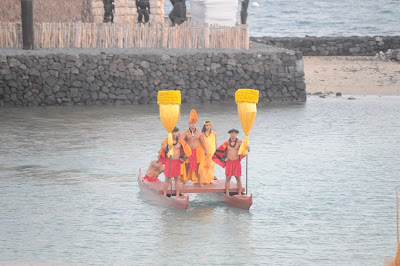 My husband does not share my love of water - picture a cat marrying a fish. But he did try snorkeling (and in the past even tried scuba) and even took some pictures of me under water doing my mermaid thing. 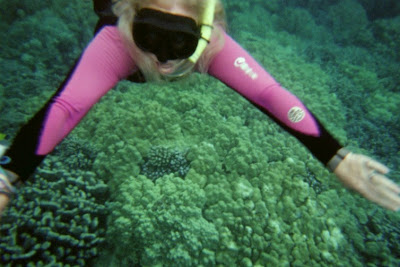 Snorkeling turned out to be our holiday compromise. Me pulling My Husband under water, wanting him to scuba, him tethering us to dry land, wanting to stay above water. The result - neither of us got what we wanted but we both learned that next time we'll each do our own thing.

On this occasion we booked a tour with Fair Winds for an afternoon of snorkeling at the Captain Cook monument - where Captain Cook met his demise during a tussle over a stolen boat. 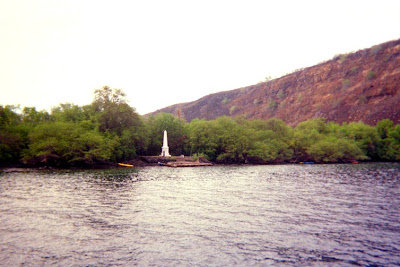 The water was beautiful! The fish were abundant, and whilst I remain forever spoiled by the great Barrier Reef in a "its never as good as the first time" sense, I always love the glory of the underwater garden as created by the corals. 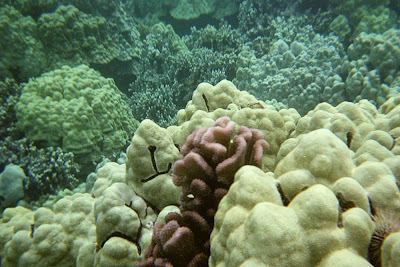 My husband endured snorkeling for a half an hour before heading back to the boat, but I had my fellow fish for company - I'm a Pisces - no surprise there. 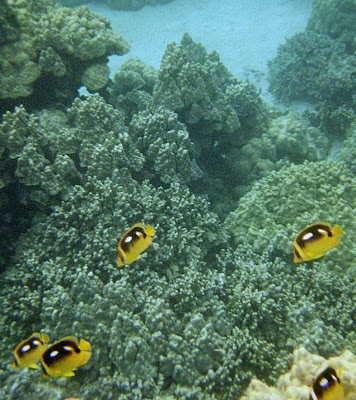 There were some eels and lots of fish but I didn't see any turtles. I saved a turtle's life on the Great Barrier reef about 10 years ago. He wedged himself between two rocks that were closer together at the top than the bottom. When I found him he was weakly struggling, so I pulled him free, and he swam off to the surface for a much needed breath of fresh air. Anyways, he nor any of his friends turned up! Nonetheless, I was the last person out of the water, the staff threatening to leave me behind if I didn't get on board. 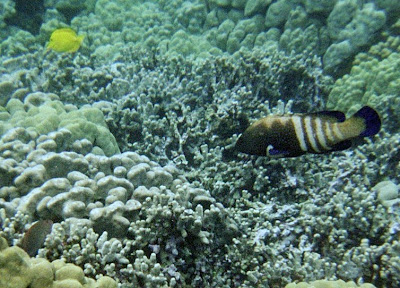 Eleven years ago I participated in a Dolphin and Whale project in  South Africa. Well, those guys came out in force! On our way back to Kona, we were delighted to be joined  by a pod of spinner dolphins. They seemed to greet us joyously and raced the twin hulls of the catamaran, lining up in the slip stream and jostling for prime position reminding me of kayakers playing on a wave. They even angled their bodies to look up at us hanging over the rail looking dawn at them.I could swear they made eye contact with me. They embodied such zest for life, such fun and freedom that we all shared it for the twenty minutes or so that they traveled with us. Even though I'd sworn not to indulge in those "swim with dolphin" tours on the grounds that they are not that healthy for the dolphins (having cringed at accounts of damaged dorsal fins and dolphins too exhausted to hunt) and could even be risky for us (imagine frolicking with a wild pack of wolves on land) had the boat stopped I'd have been the first one in with them. 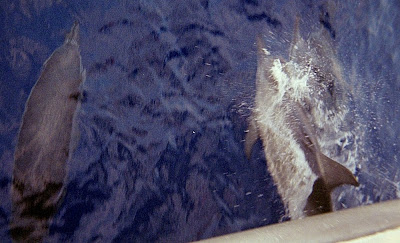 They were truly magnificent and possibly the highlight of a trip jam-packed with highlights!