Day 4 Bryce Canyon to Hanksville
Mileage 159 Miles, States – Utah
Behind schedule by 126 miles!
Another fight this morning to get Jane to route us the way we wanted, but I was determined to take Hwy 12 on our way to Capitol Reef National Park. I was glad I persevered with the navigation – Hwy 12 is one of the most spectacular roads we have ever traveled on…and to think we might have missed it if we’d just followed Jane’s navigation! 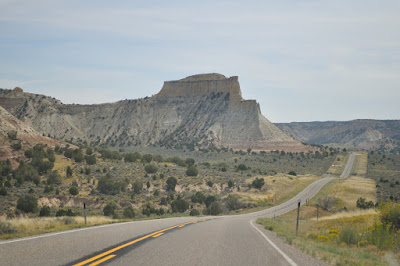 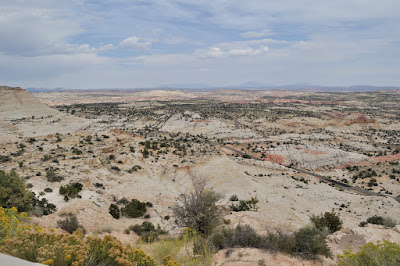 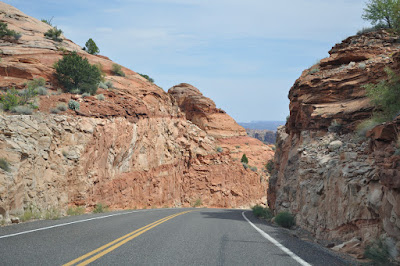 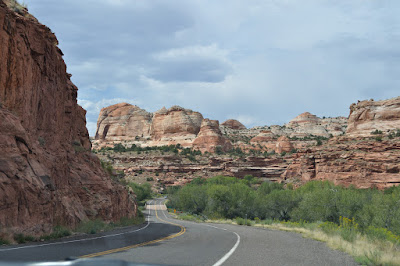 One stretch of the highway ran along the ridge with steep drops in either side – incredible! I wonder how fast the erosion is and how long before the road is gone. 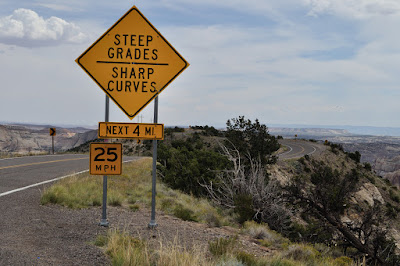 That said, we only made half the mileage we’d intended to today…each viewing point needed stopped at, exclaimed over, and photographed. Just when we thought it couldn’t get better, the sky decided to join the act and chugged out some moody clouds. 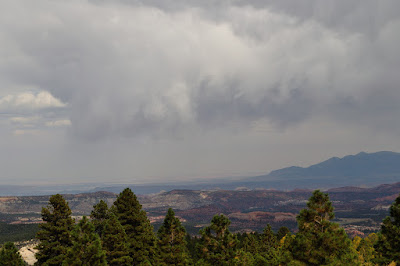 When we finally made it to Capitol Reef we decided to explore a little, rather than shoot straight through, and ended up taking our faithful little Prius down some dirt tracks! It felt like we were taking her hiking with us – lazy hiking, since she did all the work. 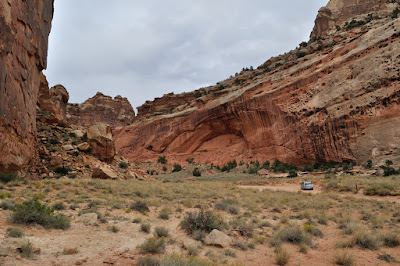 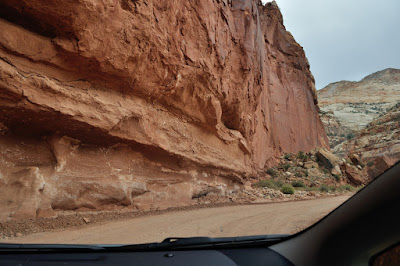 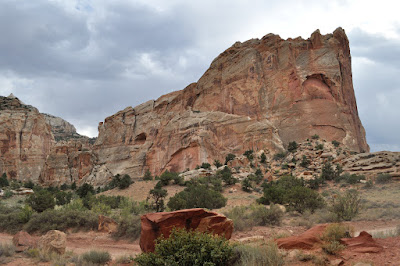 Some of the features reminded us of highly carved furniture. It certainly was a skilled craftsman who turned this out. 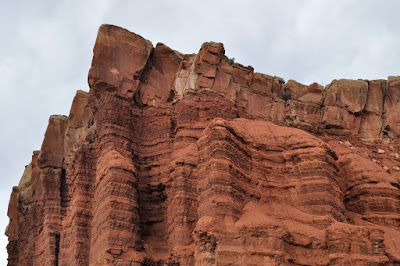 There were all kinds of rocks along today’s route.
Red rocks 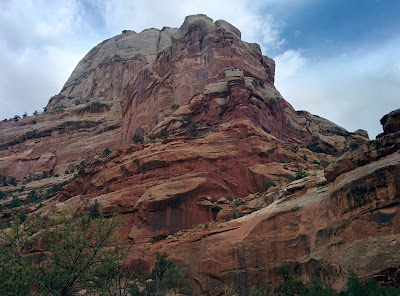 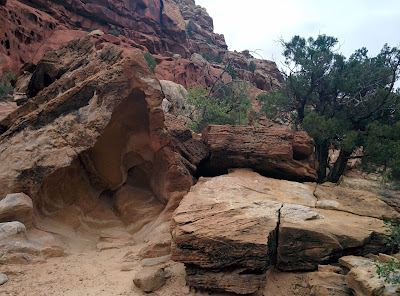 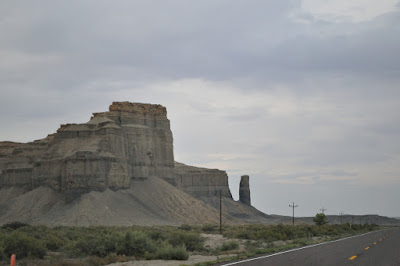 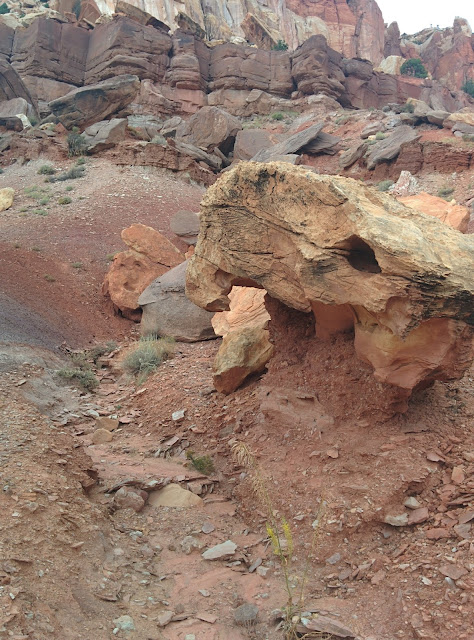 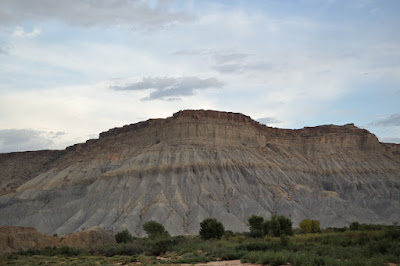 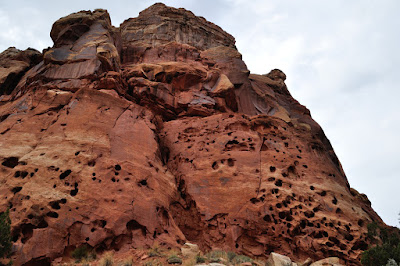 We spent the day wishing we had studied Geology at university.
Sunset was demure, secreted behind the clouds. As we lost light, we realized that we wouldn’t make it to Natural Bridges National Park as we’d planned and began looking out for towns, villages, heck, at this point it was so remote and off the beaten track, we even got excited at seeing a barn! 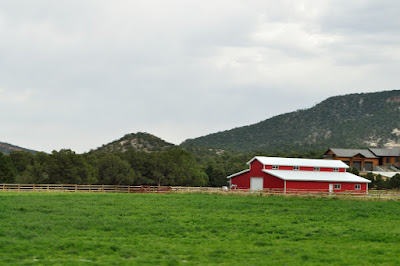 It was nearly full on dark when we reached Hanksville, the next town on the road. No point driving in the dark and missing anything. One thing I found interesting about Hanksville is that it is only 7 miles from the Mars Desert Research Station. Not hard to imagine what inspired them to base themselves here. The landscape sure did look pretty Martian at times.
Hanksville is a town with too motels. One had a “No Vacancy” sign, but the other, the Hanksville Inn (the less salubrious looking place,) hadn’t. We went into the office of the Hanksville Inn and asked if they had any rooms left. The guy asked if we had a reservation. My heart sank. Next town was 130 miles away…
“No,” we said, mournfully.
“That weren’t very smart now was it?” he asked, grinning.
“No,” I admitted. “But this place is just so gorgeous, we had to stop at every single viewpoint.”
“Yep,” he said,rubbing his chin. “I can see how that would take a while.” He took a breath. “Do me a favor,” he continued. “Could you flick that switch over there.” He directed me to a light switch on the wall near me.
I turned the switch. Nothing happened.
My Husband pointed outside. The “No” on the vacancy sign had just lit up. 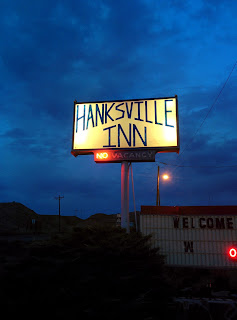 “Ya got the last room!” Motel Guy said.
My Husband and I whooped like he’d offered us the penthouse suite in the Ritz Carlton for free! Ah price…
“What’s the damage?” My Husband asked.
Motel Guy said, “Well, isn’t that the thang?”
We held our breaths. He could name his price really… He drew the moment out like those reality TV shows do when they are announcing who’s about to be evicted. We waited…
“$75 dollars, $65 if you only use one of the beds.” (Motel rooms usually come with two double beds in the US.)
“Deal,” My Husband said.
“Thanks a million,” I gushed – I’m great at gushing!
“Well,” Motel Guy said, smiling. “Ya made my day. I get to go home early, if I’ve less work to do!”
It turned out it wasn’t the Ritz Carlton, but it did the trick. We were exhausted after another astounding day’s scenery and colorful characters to boot. We’d make up the miles tomorrow…maybe…
Byddi Lee
Filed Under : Capitol Reef National Park, Hanksville, Mars Desert Research Station