We awoke to freezing fog. I can’t remember the last time I saw such a cold morning, but we were snug in our little cabin. Later, we were also happy to be tucked up in our little Prius when we came across these guys. They must have been frozen solid! 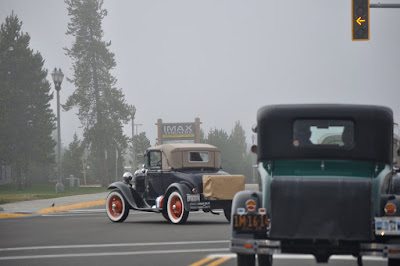 Yellowstone Park’s roads make a figure 8 – two loops, a north and a south loop.  We decided to begin with the south loop. This is where you’ll find the highest concentration of geothermal activity in the park, including the world famous Old Faithful. The park was packed with people. We’d hoped that by coming in September we’d beat the rush. I’d hate to imagine what this place was like at the height of the season if it was this bad in late September.
Geysers and hot springs are created when water seeps down into rocks that are super heated by magma chambers close to the earth’s surface. The steam rises and causes the super heated water to squirt out of cracks and pipes in the rocks. Yellowstone is the site of a super volcano. Its next explosion, due sometime in the next 200, 000 years, will pretty much wipe out life as we know it in North America and drastically affect the climate in the rest of the world for a long time afterwards. But not to worry, we probably won’t be around for that! 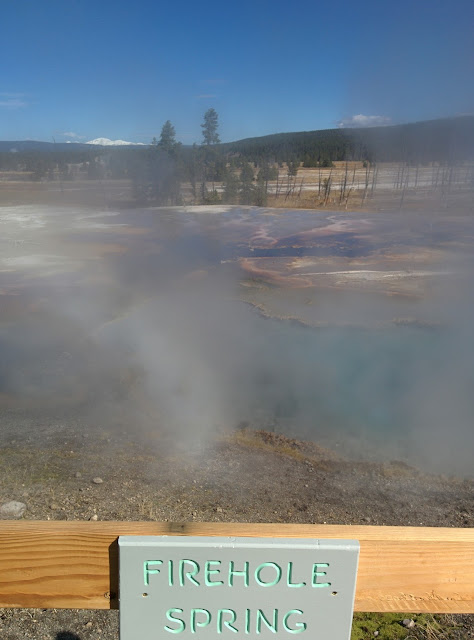 Before we got to Old Faithful we stopped at the various geyser areas on the road south from Madison as we came upon them. Parking was challenging at most of them. One we gave up on, the Prismatic Spring – third biggest in the world and biggest in Yellowstone… We’ll survive not seeing it – perhaps we’ll just go see the biggest one in the world, though an internet search as to where that is pulls up a few different answers – maybe just safer to visit them all! Still, we saw plenty of geysers and hot springs that day. 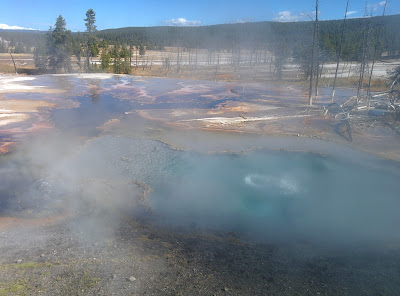 White dome geyser gave us a private performance! Once from a distance and also again when we were right up close and personal. Four of us attended this viewing. We felt very privileged. 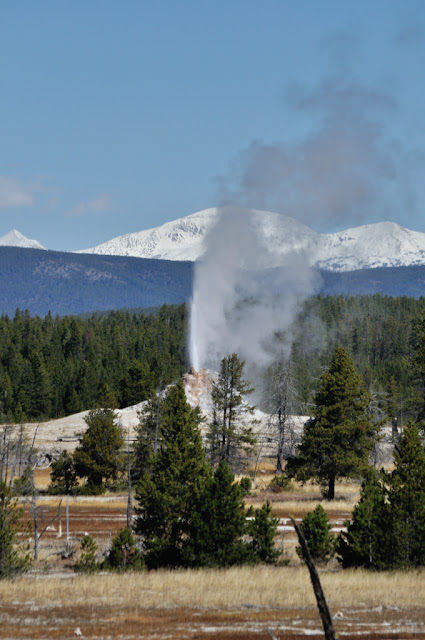 But that was far from the case when we got to Old Faithful. The visitor’s center lets you know when the next eruption will take place. As we waited with about 500 others, kids ran around screaming, parents halfheartedly yelled at them to behave (of course, they were on vacation too, only fair they get a break from disciplining their off spring too, right?) Beside us, a curmudgeonly old man grumbled at some young woman he’d never met before, for setting up her tripod stand in front of his seat, even though his wife kept telling him he’d be standing once the darn thing blew. The tripod stand was only two feet high. I felt like saying to him, “Calm yer jets!” But I was afraid I’d be the only one finding that funny! 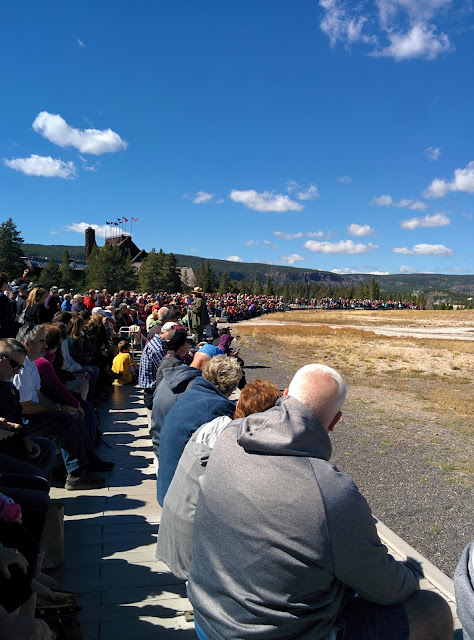 Further down a ranger shouted at people to stay on the board walk. Good job he hadn’t seen last night’s Bison, though he’d have been more biddable than some of these frantic tourists. 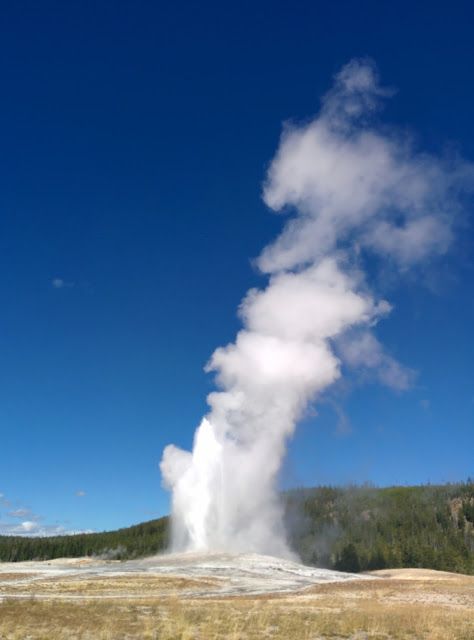 Thank goodness Old Faithful’s time keeping was spot on. Even the screaming kids beside us (yes, right next to us – I’m a magnet for it!) shut up to watch the spectacle. It was good, but in fairness, White Dome had been every bit as flamboyant. All the guide books had instructed that Old Faithful was a must see. I personally, would say if you catch an eruption at any one of the other geysers consider that box ticked. Or go see Old Faithful at night perhaps? There are plenty of geothermal features to see. 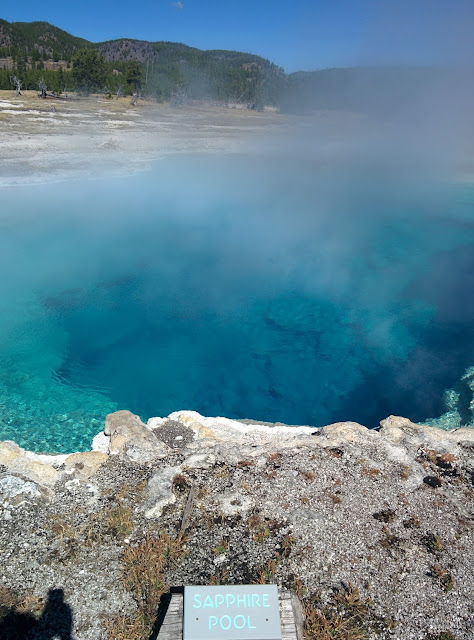 Biology is amazing – today I was glad I was a biologist as I took in the wonderful colors of the thermophile bacteria that turn the hot springs a rainbow of colors. 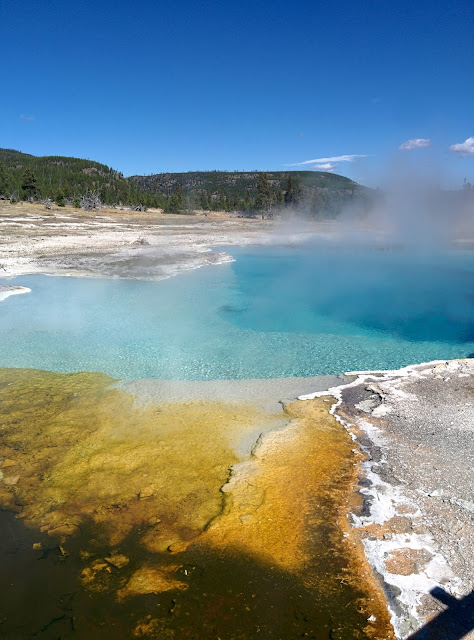 The bacteria are adapted to live in the hot waters of the spring. 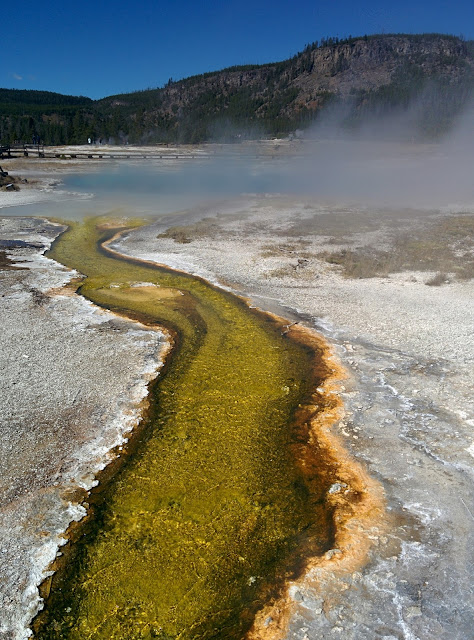 Other bacteria – thermoacidophiles – have also adapted to withstand the low pH of other springs, typically adapted to utilize the sulfur spewing out in some springs. Every niche is occupied here. We saw so many springs and gurgling, burbling, gushing, spewing geysers that after a few hours we had to say, “No more!” 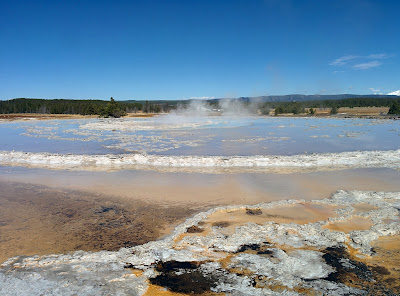 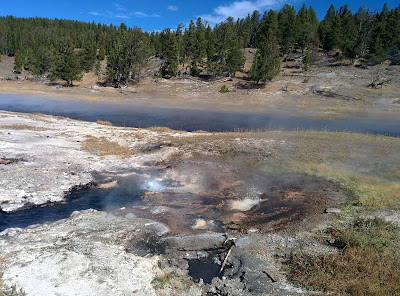 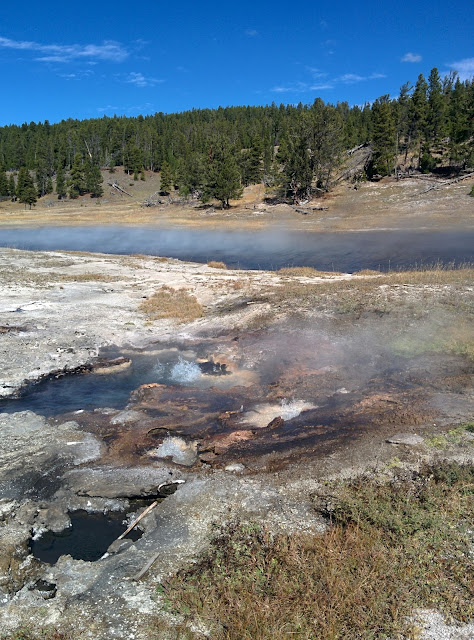 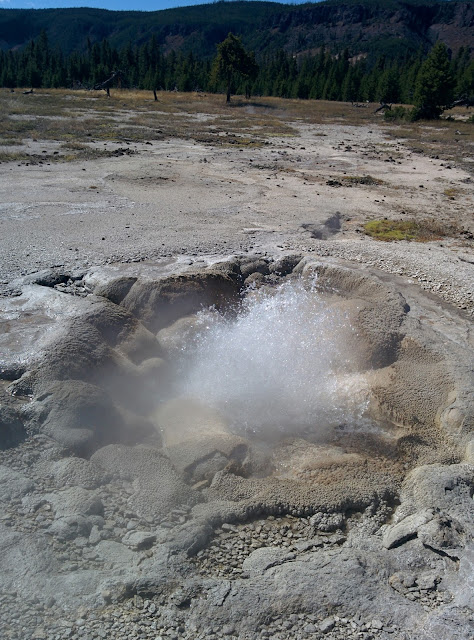 But then we’d see just one more… 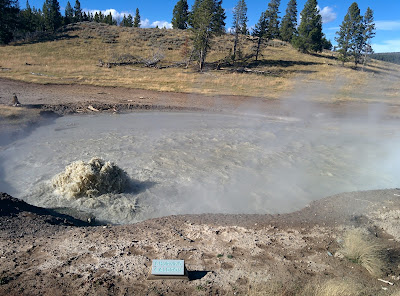 By this stage we’d traveled around the southern-most road of the southern loop as it curled along the north shore of Yellowstone lake. 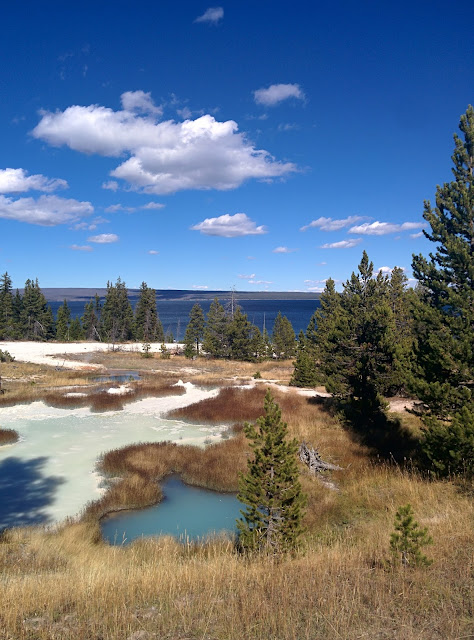 From here we headed north, through the Hayden Valley with my nose pressed to the window hoping to catch a glimpse of the Hayden Wolf pack. Alas, the only thing we saw here was some tourists cockerpoo or labrodoo or one of those designer mongrels you get these days. It most certainly was not equipped to bring down an elk, cute though he was.
We didn’t stop much along here. It looked like a nice area to hike, though it is recommended that you hike in groups no smaller than three and bring bear spray because of  the possibility of bear attacks. Seeing as we were a person and a can of bear spray short, we decided not to bother.
We pushed on up to Canyon Village, on the east side of the “waist” of the figure eight loop. The Yellowstone Grand Canyon is really quite pretty. 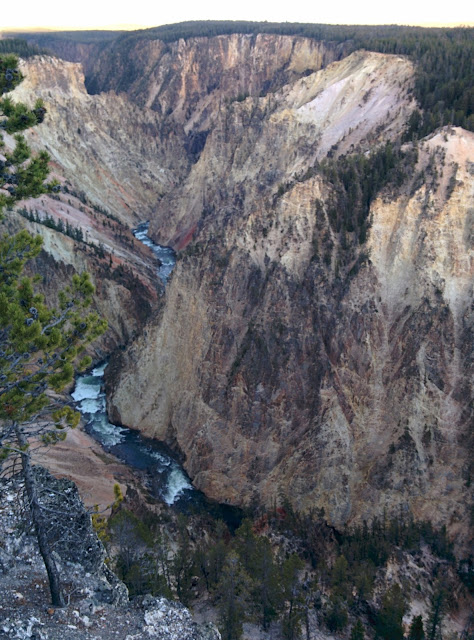 Of course, nothing close to what we saw in Utah, but gorgeous all the same (I always wonder if that is the origin of the word gorgeous – from gorge?) 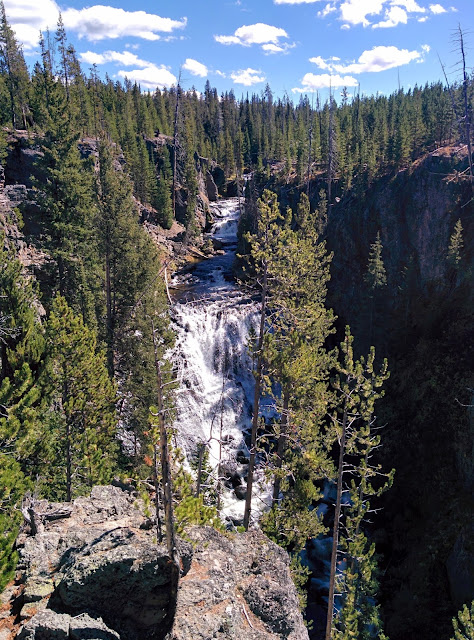 We drove along both north and south rims and chanced a couple of short, well populated hikes to good vantage points. 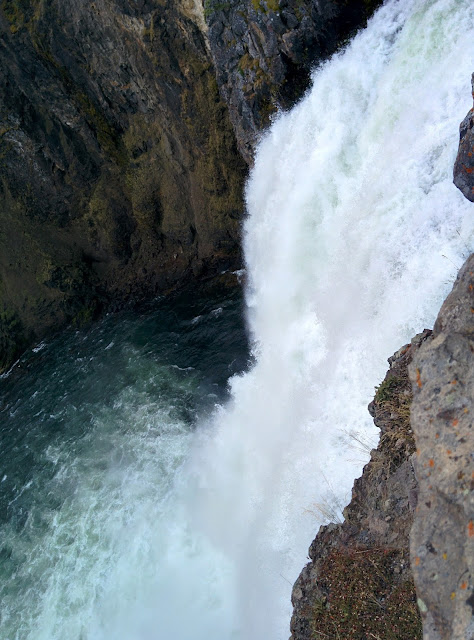 All that water was balm to our drought stricken souls. We tried to soak up as much as we could with our eyes.

The best view was from Artists Point. 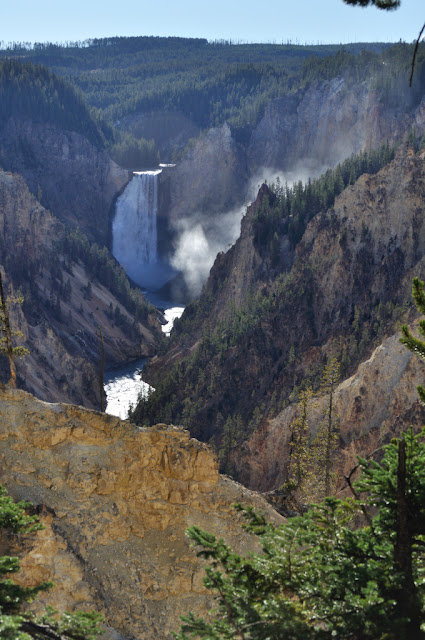 Since we were this far over, so near prime grizzly country with the sun setting, we decided to scoot on up to Tower-Roosevelt and eat while watching for grizzly bears along the way. 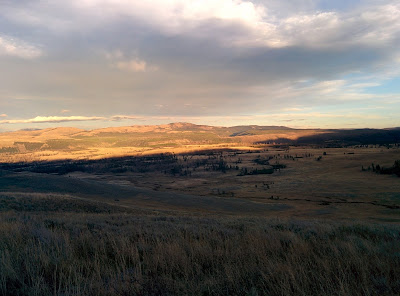 The grizzlies love the transition areas between the trees and the grassland. We didn’t see any. We tried not to be disappointed, but we were really bummed when we arrived at the place in Tower-Roosevelt that the map told us served food, only to discover it was closed for the season! We were 2 hrs from West Yellowstone. We wouldn’t starve in two hours, but we were getting hungry and grouchy, we ‘d be a good match for any grizzly! However, all we saw along the way home were these long horned sheep… 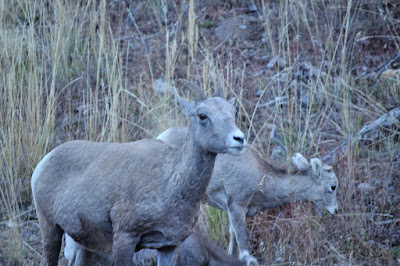 and these mule deer.. 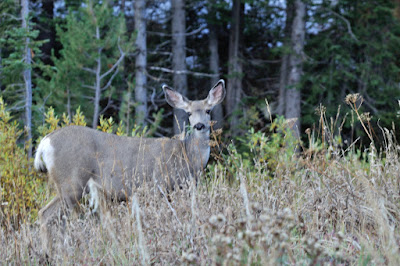 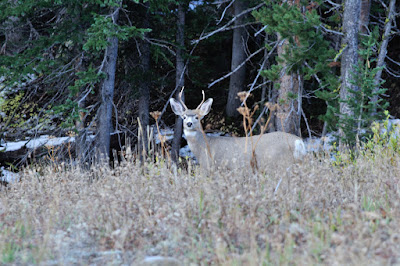 As the setting sun turned the clouds pink… 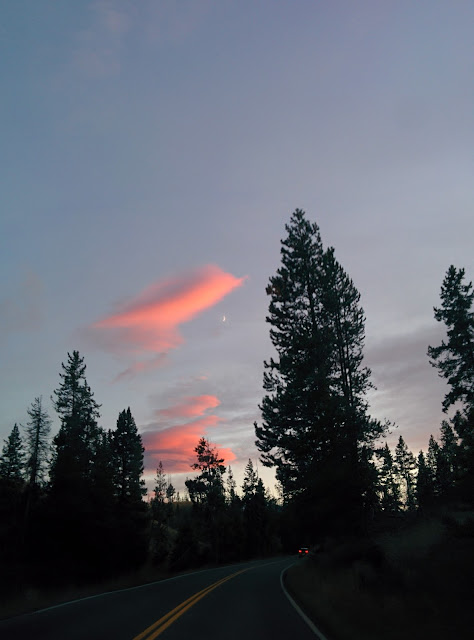 …and the moon hoisted itself over the snow capped peaks surrounding the Dunraven Pass, 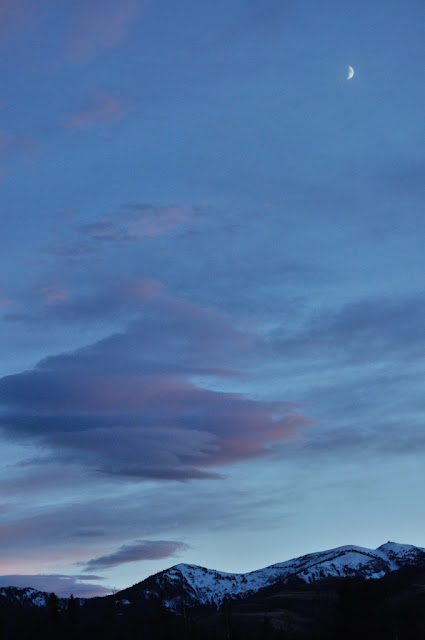 we threaded our way through the waist of the figure-8 and chatting about the highlights of the day, looking forward to our dinner.