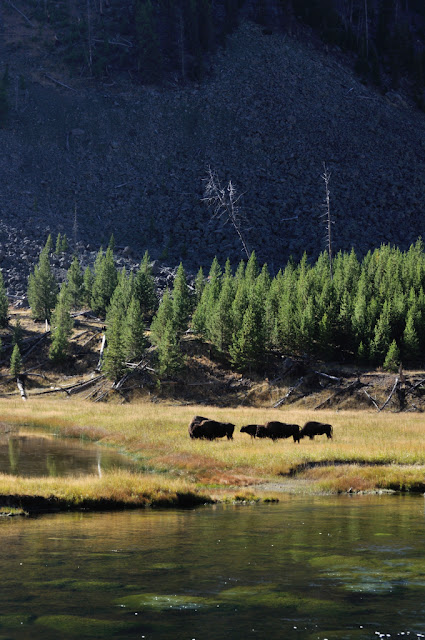 The morning sparkled with brittle Fall warmth and promised us a beautiful day. We didn’t stop at Norris, the “town” at the waist of the figure 8. There is a visitors centers and a museum here, but we aren’t really museum folk, so we motored on up the road, north towards Mammoth Hot Springs. This road is in the middle of improvements and as such there were delays. We were fine with that, knowing that we’d be returning along the waist of the 8 and not coming this way again.
Even thought we’d decided that yesterday we’d seen plenty of geothermal attractions to last us a lifetime we couldn’t help ourselves, and before we knew it, we were marveling at more geothermal features in the upper and lower terraces area just outside Mammoth Hot Springs…Well, when in Rome etc. 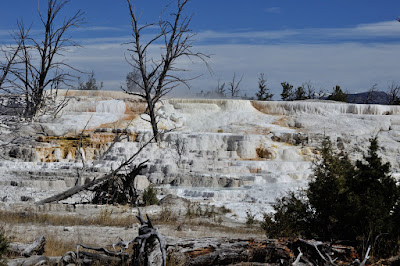 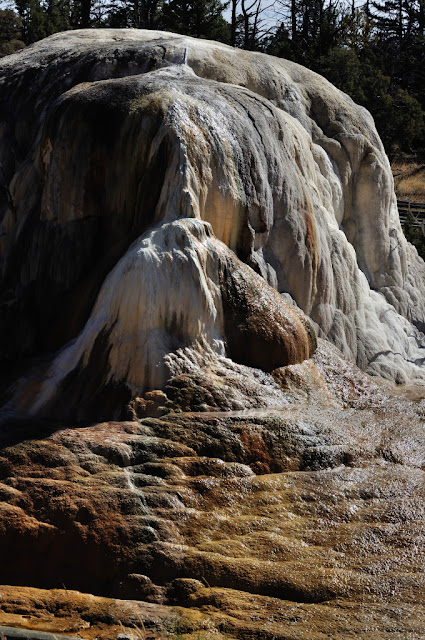 We stopped in Mammoth Hot Springs for a lovely lunch at the Mammoth Hotel Dining Room, very posh setting but without costing an arm and a leg. The food was excellent – really fresh, healthy fare – a nice change from diner food.
Obviously the word of the nice food available in Mammoth Hot Springs had spread. A herd of Elk munched on the the grass in the village green. 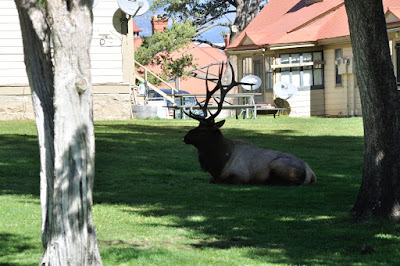 Rather than watch elk from our dining table, we headed east, following the Yellowstone River seeking out the Lamar Valley, which was, we’d been told the North American equivalent to the Serengeti. 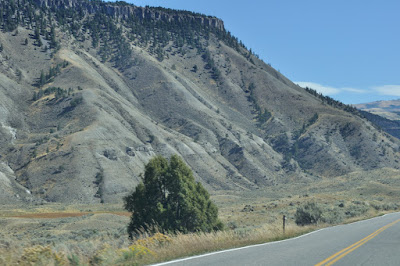 Just before we got to the Lamar Valley,we stopped off to visit the Petrified Tree – an ancient redwood tree that got buried in ash 50 millions years ago! Silica from the ash and lava plugged up the cells and turned the tree to stone. 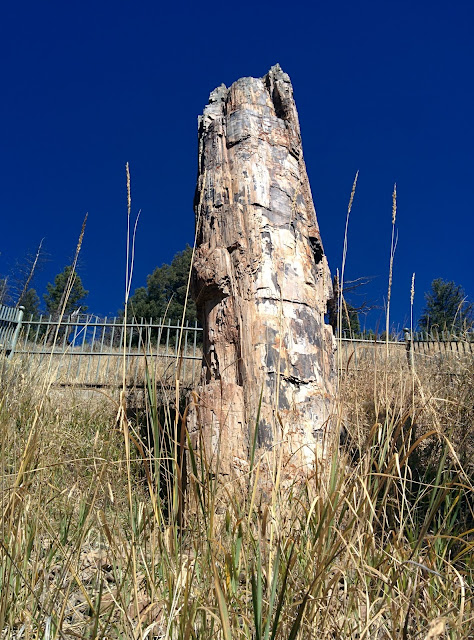 As it turned out the Lamar Valley did have herds of Bison sprinkled about it. 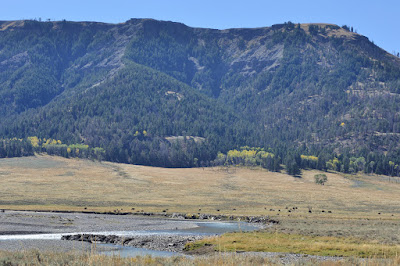 We were thrilled to add a new animal to our list -The Pronghorn deer – technically an antelope…making the Lamer Valley only more Serengeti-like. We couldn’t get him to turn around though he has a cute butt too! 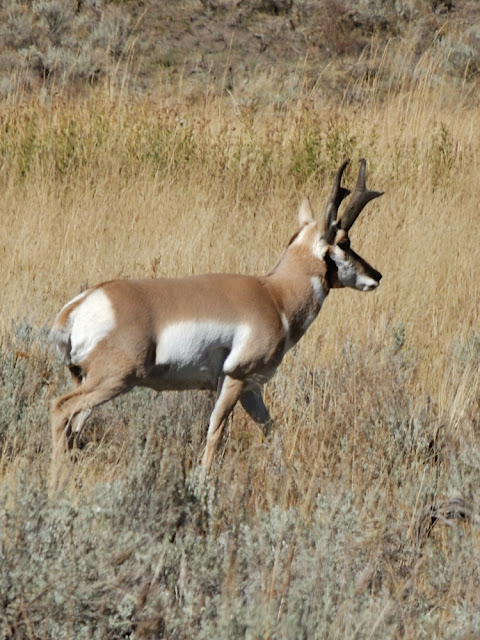 And then, just as we were coming out of the Lamar Valley, back onto the figure 8 it happened  – the thing we’d been hoping to see (next to wolves which we never did see!). A black bear! 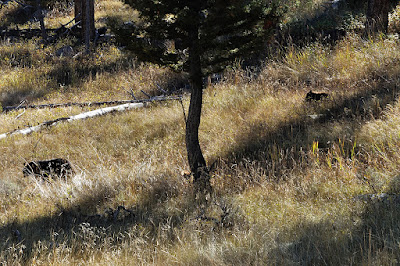 And not just a bear, a Mummy bear and her two Baby bears! How cute is this little guy? 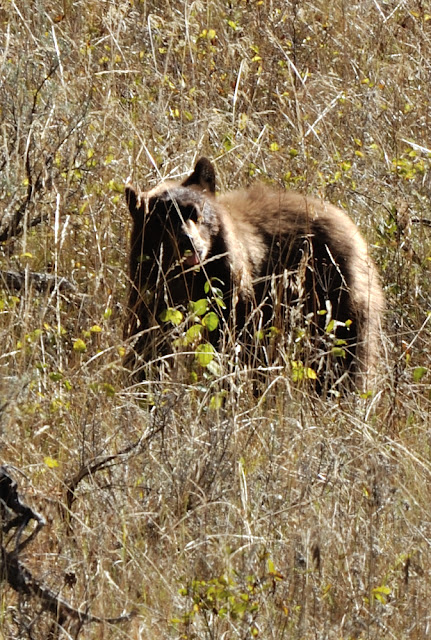 The other one hid but after we got our photos we just watched for a while as they foraged and snuffled about the place. We felt extremely lucky and blessed to have seen these guys. Its just so special.
We were a very content couple heading south towards the Dunraven Pass when it happened again! This time a bear on his own, so we decided it must be the Daddy bear (of course!) He was a very handsome fellow! 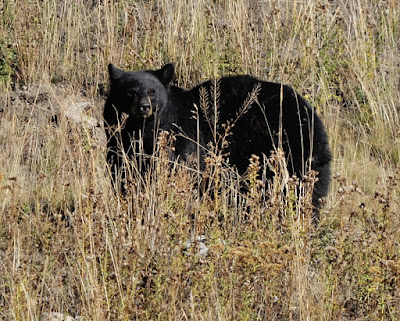 A crowd gathered to watch, and I made sure there were plenty of folk between me and him, including a selection of folk I was sure I could out-run. Well, it would mean I wouldn’t have to out-run the bear should things turn ugly! 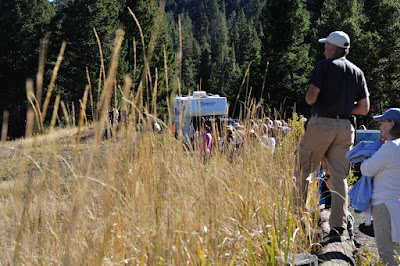 It was especially cool when he seemed to sense something behind him. He stood up to take a look, drawing a collective gasp from the crowd. He ignored us, and I couldn’t help what on earth had grabbed his attention in the midst of this pantomime! 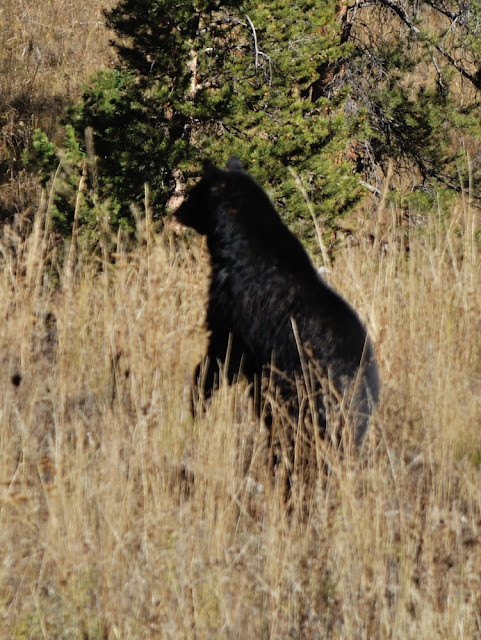 We watched for about another half hour and then he wandered off out of sight. We got back in the car and decided to end our last last day in Yellowstone with what we thought of as “our elk herd” that hung out near Madison. 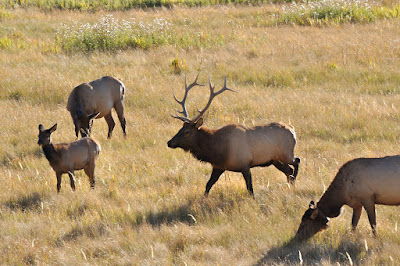 I’d made us sandwiches.We laid out a foam camping mat and just watched from a nice vantage point as the magnificent stag keep his herd of lovely ladies in line. 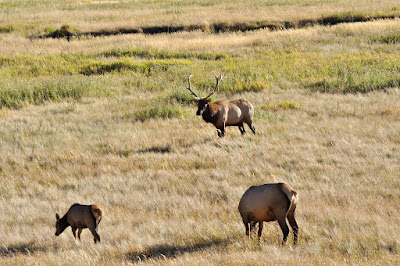 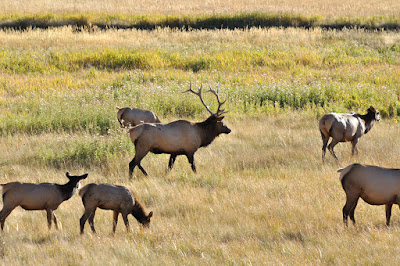 The chill crept back into the Autumn evening as the sun settled itself behind the hills and we looked back on another beautiful and eventful day in Yellowstone. 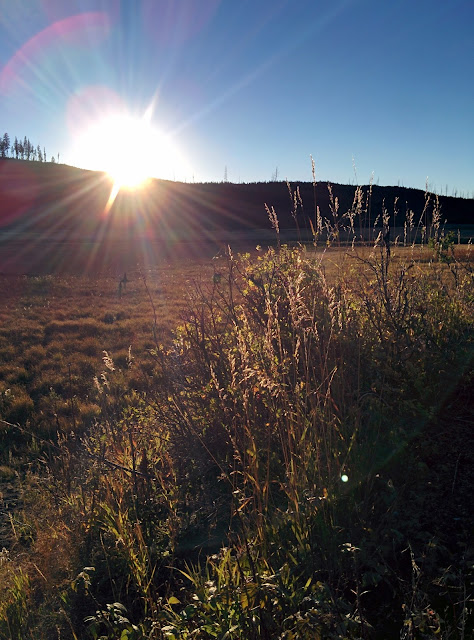 Byddi Lee
* Technically we didn’t cover any addition miles on our forward journey as we just did loops of Yellowstone Park – approximately about 100miles per day.
Filed Under : Bears, Elks, Mammoth Hot Springs, Petrified Tree, Pronghorns