Day 9 Teton Village – West Yellowstone
Mileage  128 miles  States – Wyoming, Montana
Breakfast in the room was lovely – and well it should it – it cost $50! Oh the joys of going posh. Outside, the sun shone bright, and we were itching to hit the road. Today we’d arrive in Yellowstone – the purpose of this trip, which had morphed from being a Yellowstone Park trip to a National Parks trip!
The first road we took turned nasty quickly – muddy and full of potholes. Poor Prius! 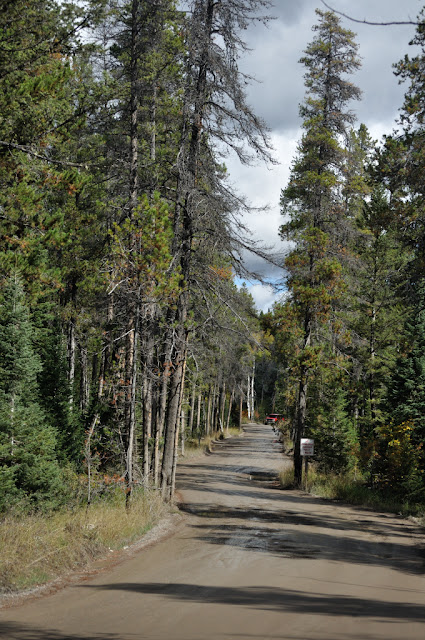 But she made it through and soon we were admiring the scenery…again. 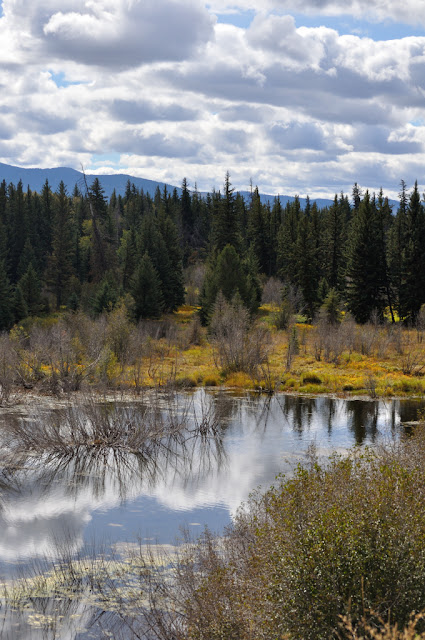 It was so nice to see such an abundance of water, and it made the yukky weather the day before well worth it. 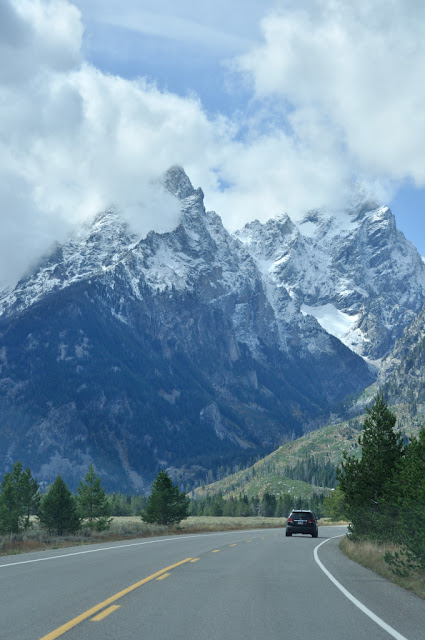 The Tetons were still shrouded in shards of mist, as if like cotton wool balls, the clouds had become stuck on the peaks and then shredded as some celestial hand had tugged them off too hard. 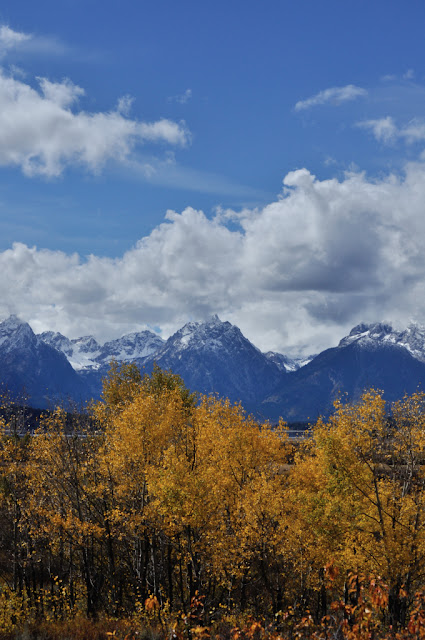 The changing seasons were evident. The temperatures had plummeted below zero over night and the air stung crisp with autumn. We could only imagine how refreshing a hike here would be, but imagining was all we had time for, we had to be at our accommodation and checked in before 9.30pm. The plan was to shoot through straight to West Yellowstone and check in well in advance of sunset, then start exploring Yellowstone Park secure in the knowledge that we had somewhere to sleep (even if it were cruddy!) 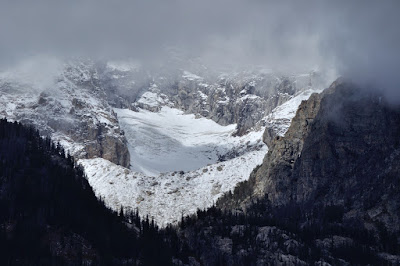 Not that Grand Teton did not tempt us to stop and admire it’s many attributes – such as Teton Glacier. 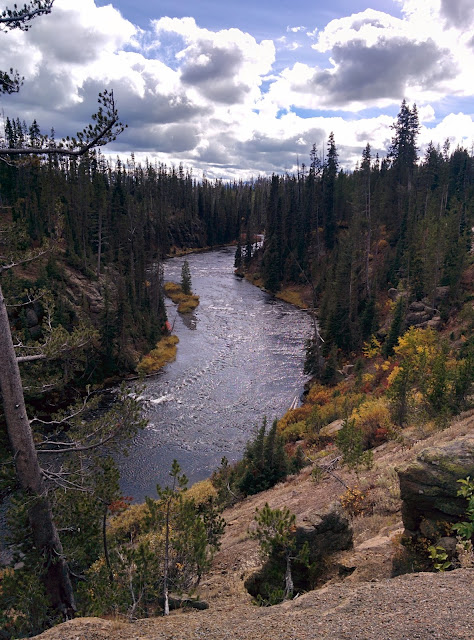 Onwards and northwards – we entered Yellowstone’s South Entrance and didn’t bother stopping for the photo of the park sign since there was a line of people waiting to get their pictures taken with it! This was indeed a taste of things to come. 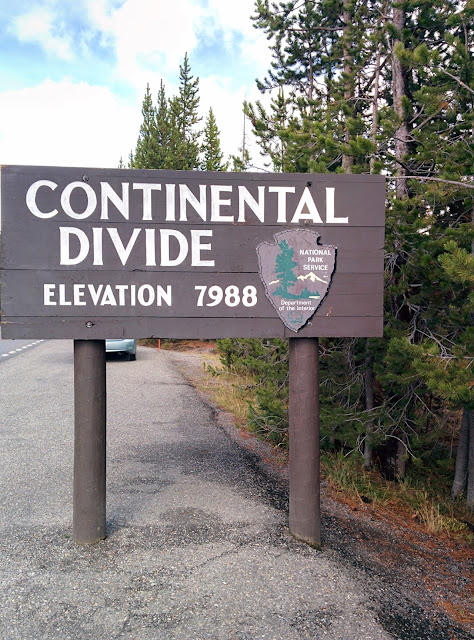 The water on one side would ultimately drain into the Pacific Ocean and the water on the other into the Atlantic – facts that boggled my mind, since we were so far from either ocean.
There were two main draws that had attracted me to Yellowstone – the hydro-thermals and the wildlife – especially the wildlife. I’d heard that Yellowstone was like being on safari in North America, with herds of Bison roaming the plains. That we wanted to see, and that we saw pretty much as soon as we entered the park! 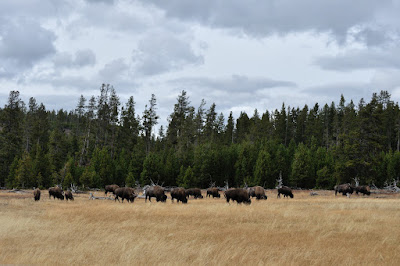 In fact, the bison were everywhere on this south western side of Yellowstone. Bison are different to Buffalo – Buffalo are only found in Africa and Asia. Bison are mostly found in North America…and mostly all over Yellowstone.
And then right beside the road, between Madison and West Yellowstone, we met this guy…a magnificent bull elk! 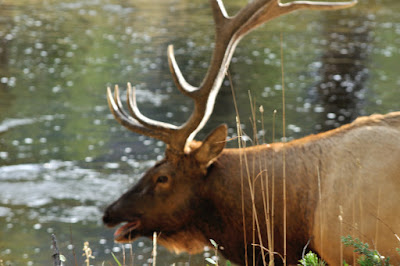 The picture is a bit fuzzy – a result of a drive by shooting (of the digital photography kind!) The ladies were grazing not to far away. 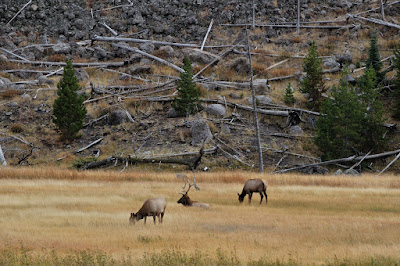 But we hadn’t time to stop! We’d been warned about “Bison Jams” and wanted to get checked in, eat and return to the park well in advance of sundown so we could relax and absorb the sights.
Our accommodation – the elusive West Yellowstone Self Catering Apartments – was in a down-in-the-heel part of the town, but despite warnings in the reviews that the place was very hard to find (one person never finding it at all!) we landed at the right place first try. The man checking us in was really nice. It turned out he was South African and had lots of great advice about where to find bears. (I’ve found from past experience that the South Africans know their game!) We shared safari stories about Namibia, a place we’d both been too, as he walked us to our Apartment…
It was nice! Not top class luxury, nor Snake River Lodge and Spa luxury, but cleaner than the Riverside Inn, in Moab, and much better than the Hanksville Inn – though for $170 a night it was nowhere near value for money. It was clean, and everything in it worked – It was basically one of a row of cabins (that reminded me from the outside of the slave cabins described in Roots) that had a bed, two comfy armchairs, a counter top with two high chairs, a mini kitchen with cute mini appliances and a shower room with toilet. It had everything we needed and the decor was homely. We liked it!
With that sorted, we charged through our dinner at a nearby diner and tore back into the Madison area of Yellowstone. We stopped to get our ducks in a row, as we watched the changing evening light on the Firehole River. 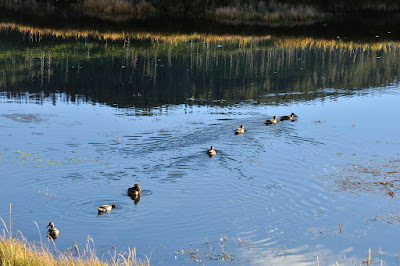 This beautiful elk cow graced us with an appearance. 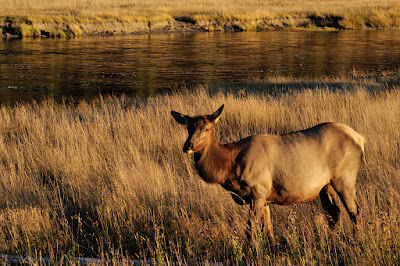 South of Madison is a geyser area.
As the sun sizzled in the snow caps tucked behind the horizon, we went to watch the steam thicken from the geysers as the air temperature dropped, tripping over more Bison on the way. 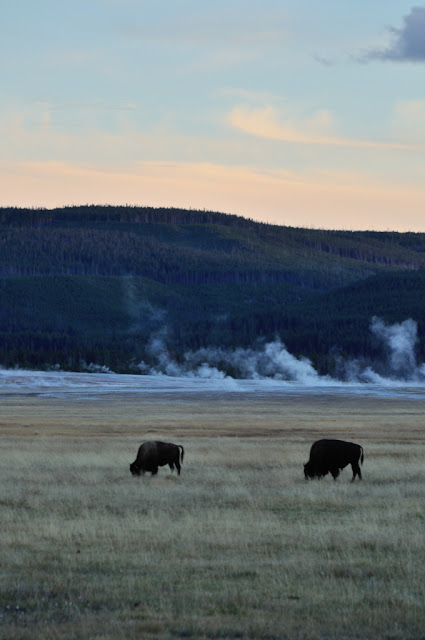 Bison can see best in a field of vision 180 degrees from the sides of their heads and not very well straight in front of them thus they lack the binocular vision that their predators need to judge distance to catch prey. Many animals that are prey have this attribute. It means they can watch for predators that may try to sneak up on them. However, it makes it hard for them to read the signs that are posted to tell you stay on the boardwalks and off the possibly super-heated hydro-thermal areas! 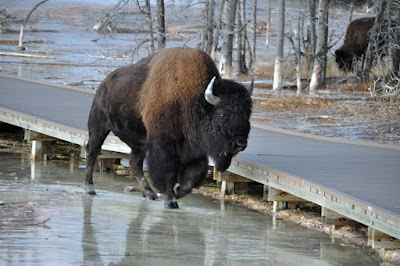 We two humans, possibly the only ones crazy enough to be out in such frigid temperatures – it was now below freezing- had the boardwalks to ourselves to watch steam venting, sun setting and moon rising. 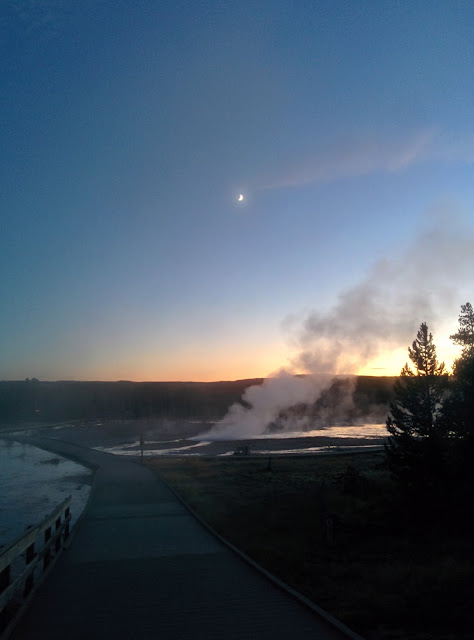 Satisfied that we’d milked enough excitement out of our first day, we headed for our apartment. Before we got too far along the road west from Madison, the traffic ground to a halt. We crawled along, chatting contentedly, not in any hurry. Obviously we weren’t the only creatures feeling this way. Further up, we saw blue flashing lights and began to worry that some poor creature had come a cropper on the road. Eventually we discovered the cause of the traffic jam… A single Bison, walking straight up the road along the yellow lines, with his very own police escort! 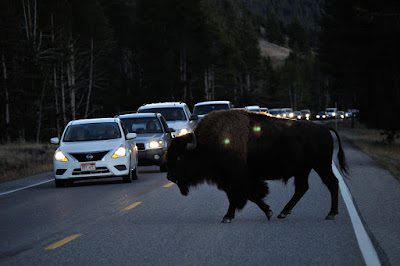 Every so often he’d zig-zag off course as his poor eyesight revealed alien creatures with big shiny eyes! It was, for us, the funniest traffic jam ever!