Port ship actually docks at: Muara
Attraction/Town you are aiming to visit: Bandar Seri Begawan
Distance from Port: 16 Mile – 30 minutes by car
Mode of transport we used: Taxi US$40 each way
English spoken by locals: Many do speak English. We had no issues.
Ships tour necessary? No – safe and easy to navigate and negotiate
Hassle from merchants and taxi drivers: Minimal.

Standing in the long queue during ship embarkation, it amazed me just how grumpy people looked. I felt like shouting, “Hello people! We are on vacation. Be happy about it. It’s not like you are in the line at the DMV! Smile for goodness sake. This wait will not last long and soon you will be eating a fabulous lunch…get some perspective!”

Of course, I didn’t say any of that out loud (or at least louder than a mumble to My Husband!)

When a Fun Couple near us, the only ones laughing and seeming to enjoy themselves, caught our eye and pulled us into their happy time with some banter, it was lovely and it made the time fly by.

Our first port of call was Brunei. We docked in Muara, a thirty minute drive from the main town Bandar Seri Begawan. Brunei is quite a wealthy country with it’s own oil fields. Petrol and thus transportation is cheap.

It is also a Muslim country and quite devote. Friday (the day we were there) is a holy day and so lunch hours in places like the museums were extended, if the museum was even open at all. Not being much into museums, we didn’t mind.

I think it’s important to respect the sensitivities of a country you visit, especially if it takes very little effort as in this case – covering your shoulders and wearing longer trousers and skirts. Let’s face is, very few folk getting off  a cruise ship are supermodels – do we really want to see all that flesh anyways? Dressed appropriately, I felt perfectly comfortable here.

On the morning we landed in Brunei, My Husband and I were still at breakfast when the Fun Couple from Embarkation Day walked by and started chatting to us. Upon exchanging plans for going ashore, we quickly realized our independent plans ran along the same track, and we decided to team up and split the costs of the transport.

Princess Cruises was offering a “Bandar On Your Own” excursion for $59 per person. This is simply a lift into town without any type of tour. Had the four of us taken that, we’d have spent a total of $240 between us. That’s the typical mark up the tours have. Instead we four traveled the same distance for $10 each, at a time that suited us, in a taxi.

We wanted to take a river taxi to the water village of Kampong Ayer. The cruise was offering a trip there, along with a cruise to “see” proboscis monkeys in the wild, and admittance to a museum for $239.95 per person.

Our local taxi driver dropped us at the river and we picked up a water taxi who would give us a one hour tour of the water village and out to the mangroves to look for proboscis monkeys – for $10 each. The museum was the only thing we’d miss out on… for $229.95, I could live with that! 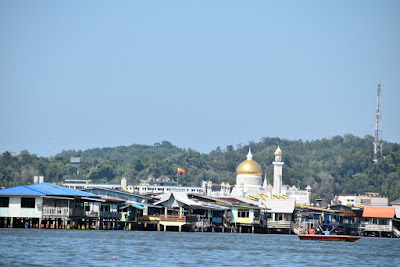 It was hot and humid, (though nowhere near as bad as Singapore – I doubt anything ever again will be!) but once on the river, the breeze made things more comfortable. Our skipper had pretty good English and provided a nice commentary on things of note that we passed. He even pointed out where he lived in the water village, Kampong Ayer. 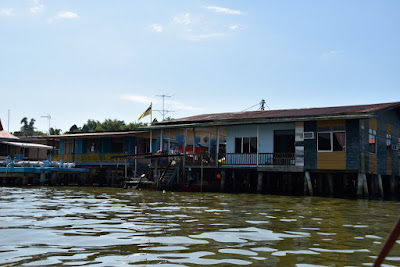 That’s a mosque in the background. 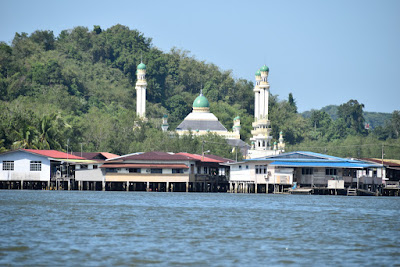 He told us these rosters were for fighting! In a place where gambling is illegal, I wondered how that worked. 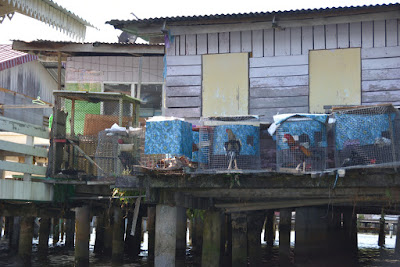 I wondered as well at how proud he seemed of the Sultan’s Palace, with its roof of solid gold. He didn’t seem to resent the contrast in opulence between that and his own more humble dwelling. 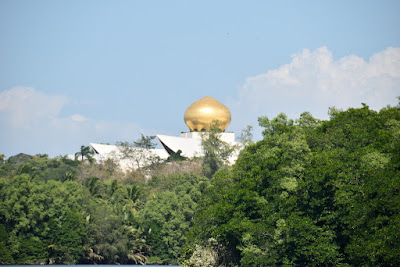 In fact the population seemed seemed happy with their rulers, who did open the Palace to the people to visit freely once a year. Our skipper seemed more impressed with fact the Palace had over 150 bathrooms than anything else! Though I may have picked that up wrong what with him shouting over the jagged hum of the boat’s engine and then there’s the whole lost in translation thing…

The mangroves jungle looked dense and impenetrable – I wondered what snakes and creatures hung out in there. 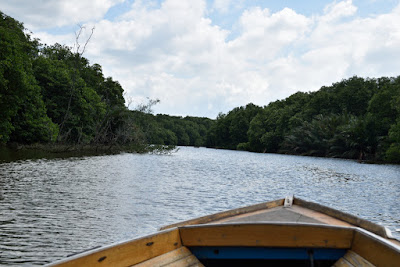 We passed a huge group of people (from the cruise ship) who had pulled over to look for proboscis monkeys. We pulled a little ways up and actually found some. You could see them swinging through the trees but with all the foliage it was hard to get a picture if them so you’ll just have to take my word for it – they were there and fun to watch. Such strange looking creatures, human-like with massive noses! Most of the ships tours folk that we chatted to didn’t see any. Another score for the independents.

Some of the buildings were beautiful. I wasn’t sure what this was – another palace or a mosque? Perhaps if I’d been on a “proper” tour I’d know! The dome is at least gold leaf, if not pure gold. 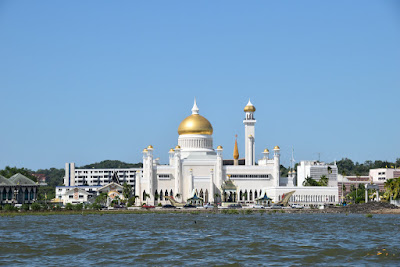 The river taxi dropped us back in town and we went for a quick wander around the town before going back to the taxi ranks. We spotted the same driver who’d picked up up at the port that morning. He greeted us like long lost friends, and we hired him to bring us back to the Sapphire Princess where I changed out of my sticky clothes into a swimsuit and sat in the hot tub as we set sail for new lands.