Port ship actually docks at: Cau Da Port pier – ships tender transfer
Attraction/Town you are aiming to visit: Nha Trang
Distance from Port: 10 min by car
Mode of transport we used: The town put on a free shuttle bus, so we used that.
English spoken by locals: The younger generation mostly
Ships tour necessary? No
Hassle from merchants and taxi drivers: Quite high hassle factor. You need to be quite assertive with your, “No thank you, I don’t want to buy that.”

Nha Trang is a seaside town with a beach flanking it’s east side. The coastline is beautiful, though the air is hazy with humidity and probably some pollution. The murky water in the foreground did not lure me in for a swim. 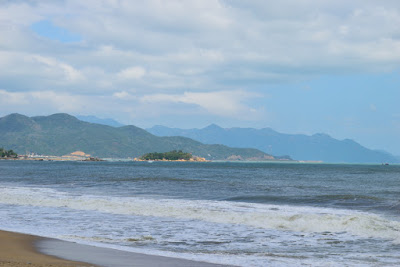 You can just about see our ship anchored off-shore in this shot. 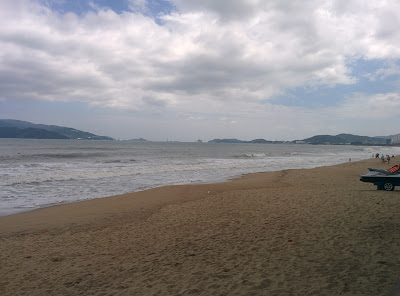 A tender is a little boat that takes you from the ship to the shore when the port is not deep enough to accommodate your ship. If the weather is bad, they sometimes have to cancel the visit ashore as it would be too dangerous to move between the boats in rough water. Fortunately, we were able to go ashore even though it had been quite stormy the previous day.

As soon as we got ashore, My Husband and I went for a cup of coffee at a local cafe. I was not prepared for Vietnamese coffee – very strong and loaded with sugar. It beat me. I could not force it down. While we were there we saw the ice being delivered and made a mental note not to have any ice in our drinks that day! 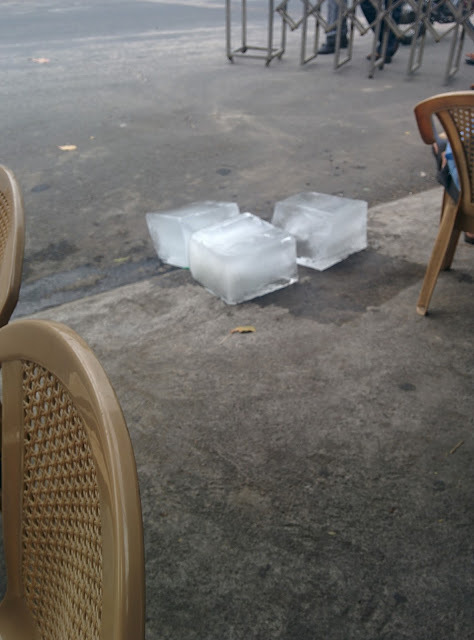 We took the free shuttle into the center of Nha Trang. I was amazed at the amount of traffic, especially the number of people on mopeds, buzzing around like a swarm of busy bees.

It was a Sunday, so many of the museums were closed. We’d been unlucky with the way the days had fallen both in Brunei and now here, but there were plenty of other things to see and marvel at – like how in the heck does the electrician sort this out? 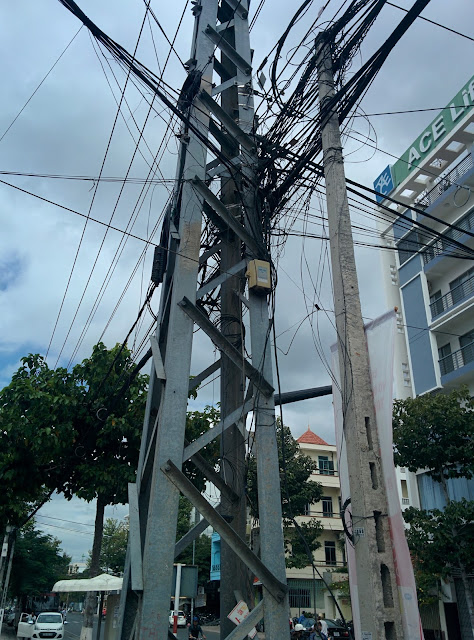 This was just a small jumble of wires – we saw worse.

Fortunately, there are pretty good google maps for Vietnam. We’d downloaded them at home, so that gave us a good way to navigate.We decided that it was a fairly short walk to go see the Chua Long So’n temple that promised us a hilltop view of the city.

Yes, the walk was short, but crossing the roads with its crazy traffic was really the challenge! All shapes and sizes of vehicles flashed past us. We watched a local woman (you can see her in the video below if you peer carefully – she’s off in the distance – sorry but we were kind of pinned!) stride confidently across the road maintaining a constant speed. This had been mentioned in the Port Lectures we’d watched on our room’s TV. The idea is that you walk at a constant speed when there is a break in the cars and bigger vehicles, and the mopeds would navigate around you!

Eventually, we plucked up the courage to try it ourselves – it was either that or go back to the ship! It did work. There was one heart-stopping moment when a moped driver (with passenger) decided to change lanes abruptly and him and I found ourselves eyeball to eyeball. He braked and I sprinted. The bike behind him nearly ran into him, but by that stage I was safely on dry land the sidewalk again!

We didn’t even attempt to cross here, but were tickled by the music from the nearby shop that provided a really apt sound track!

We bravely crossed that one by shadowing a woman who was walking with her little girl!

The Temple was very beautiful. 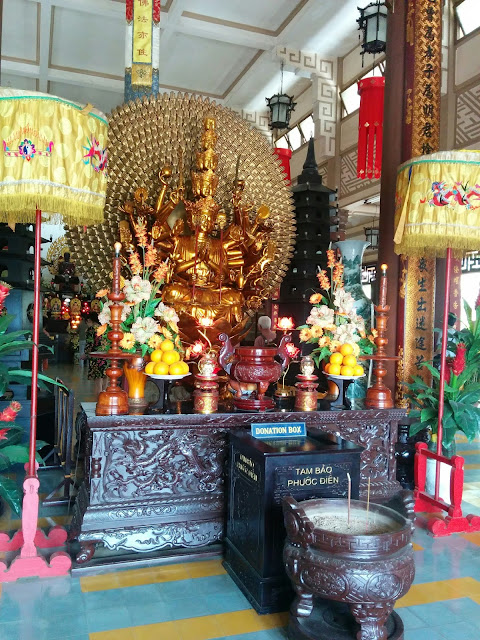 There was a giant reclining Buddha stretched out 50 feet long.

In some parts, it was even quiet and quite serene, but most of it was bustling with tourists and crawling with people trying to con those tourists! 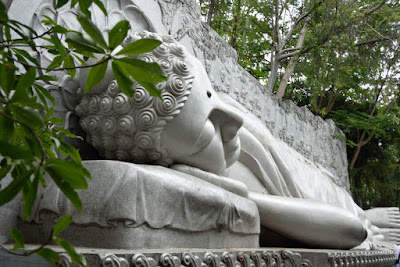 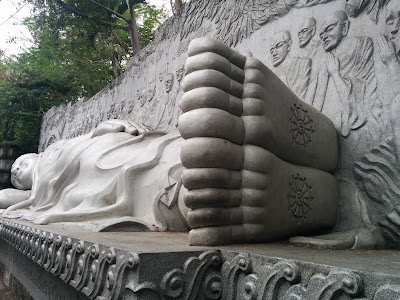 Another Buddha sat up high on the hill. 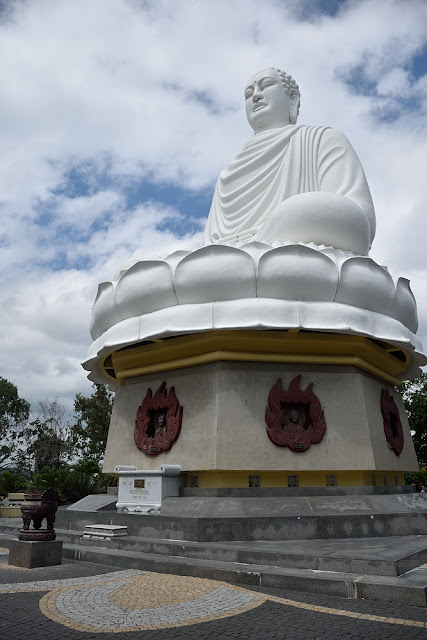 From up here you could look over the town of Nha Trang. Not the prettiest Asian city I’ve ever been in, and the trash was piled up all over the place. A pity, but perhaps with time, tourism and financial support, priorities will change and the littering problem will be tackled. 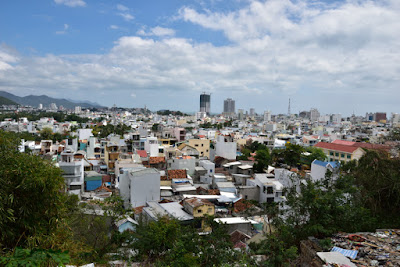 The insides of the buildings were gorgeous! 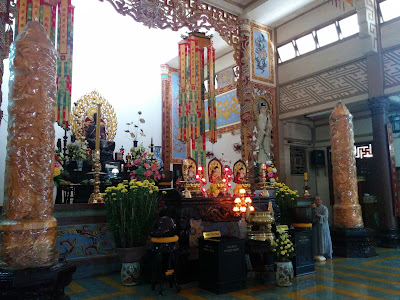 It was interesting to note that this symbol in the ceiling –  Called the svastika in Sanskrit, is an ancient symbol of auspiciousness in Hinduism, Buddhism, and Jainism, despite it’s negative associations in Western culture. 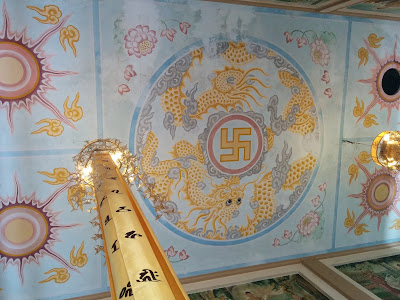 When it come to unwitting tourists getting ripped off, don’t think you are safe just because you are in a holy place of worship. Around every corner  people were trying to selling cheap trinkets for more than they were worth. Others may have seemed friendly, but really were trying to squeeze a few dollars out of the tourist.

We fell foul of this ourselves. In fairness to My Husband, it was mostly my fault.

We’d gotten separated, and when I caught up with him he seemed to me to be chatting to an old man in Cantonese. Nice, I thought, we’ve got a buddy. The old man spotted me and pointed to the pergola near us and beckoned for me to follow him up the steps. 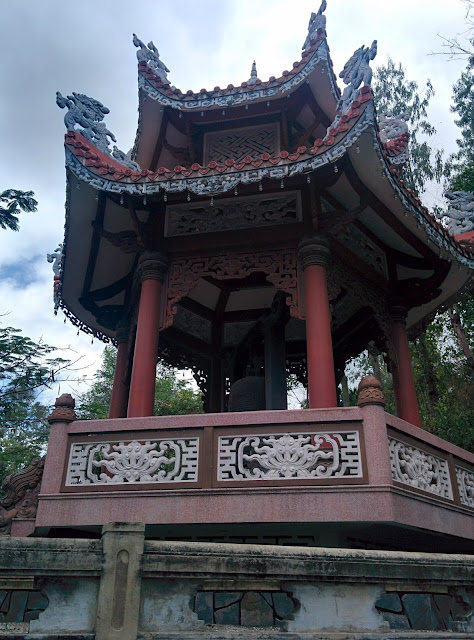 My Husband tried to stop me, but I was charmed by the pergola which housed a large bell.

The old man opened a gate and brought us up to the giant, beautifully carved, bell. He patted the wooden bench below it indicating I should sit down inside the bell for, “Good lucky for family.” I don’t believe in that sort of stuff, but I though it would be a cute photo. 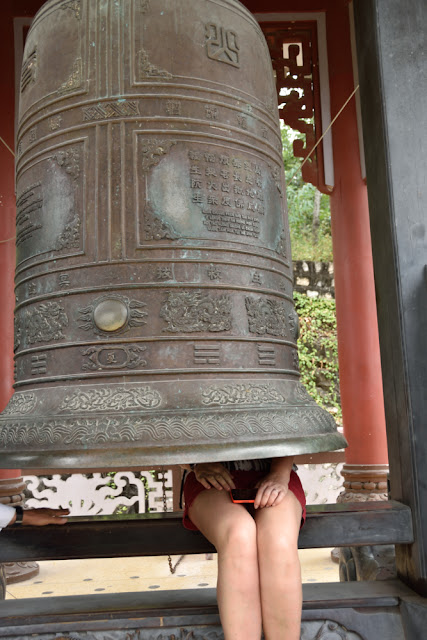 You can see him patting the bench telling My Husband to sit down too. He did. He didn’t want to be rude to the old man or to me (bless his kind heart.)

We giggled inside the bell as the old man knocked it three times and mumbled what we presumed were prayers.

When we got out of the bell and tried to leave the old man and a young woman who had appeared from nowhere, blocked our way and demanded we pay them 200 Vietnamese Dong! Well, it was only US$10, but that’s a lot of money in Vietnam, and I was annoyed at being pinned down for this. There wasn’t anyone else around. What could an old man and a young woman do to us? But we didn’t want any unpleasantness – especially just for US$10 but, dammit, it was the principle of the matter – I’d happily give ten times that to a deserving cause at the drop of a hat, but to be conned grrrrr… We gave it anyway – feeling very stupid!

And the picture – well at least my bum doesn’t look big in it, right?

After that we visited the Catholic Cathedral – playing it safe I suppose, and since it was a Sunday, a prayer was in order. The church was nice but then again I’m from Armagh, Ireland – a place that has not just one, but two beautiful old Cathedrals, so I’m a bit of a Cathedral snob! 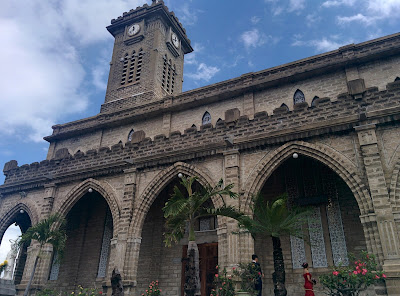 We made our way back to the restaurant to wait for our shuttle bus and take advantage of the free WiFi. The melon juices looked too good to pass up. I’d taken two big gulps of mine before I registered that it had ice in it! 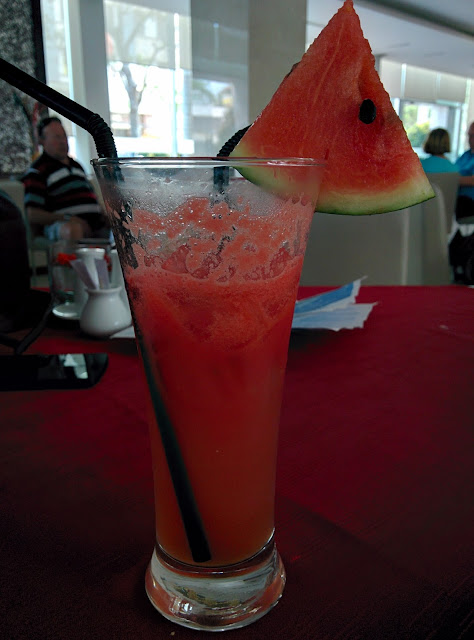 It was circular with a hole in the middle – machine made. We reckoned we’d be okay and live to see another sunset… we did! 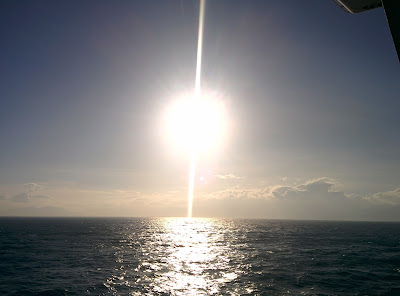