If anyone is interested in coming to workout in our gym, you are more than welcome.  Its right in front of the house, and it has a variety of workout machines…

There’s the Shoveling Machine – it’s great for toning the arms and torso.  Al lent us the Wheel-Barrow Machine – great for the legs and arms, and if you have preceded it with the Shoveling Machine, you can get a really good stretch on your back muscles too.  Try the uphill mode for a bigger challenge, and to hone your balance, there’s the breaching-holes-with-narrow-plank mode; really quite tricky!  If you feel that the back and knees need more working out, there is the the Picking Up Stones Machine, but this one gets a bit boring, though you can upgrade this to the Carrying Paving Stones Machine which does seem to have a beginning middle and an end to its routine.  Everyone is welcome!

Oh wouldn’t it be great to wake up tomorrow morning to see a queue of people waiting to enroll at this gym.  My friend and neighbor, Laurie, told me that when the time came, what I needed for my garden would come along.  She said that after listening to me complaining (poor thing suffers all my “venting” so patiently) that the wood chip people (who shall remain nameless) still hadn’t called me back despite my numerous calls.  Actually, her zen outlook has been right so far.  Just when I couldn’t face pulling another stump out, Jon comes along and digs them out.

During this excavation we unearthed lots of rocks and two strips of sheet iron approximately 8 ft by 2 foot.  We had no idea how we would dispose of it.  Also, we were worried that the steeper parts of the embankment at the edges of the garden might slip and we felt we need to shore them up.  One morning I had a lightbulb moment – I figured we could use the iron sheets to hold back the soil and disguise the other side with a wee stone wall.  The Irish have cleared their fields for centuries by building stone walls – sure its in me blood! So three problems solved with one solution. 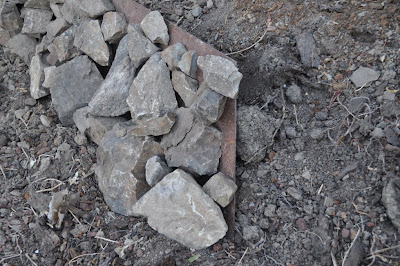 Mind you they don’t have earthquakes in Ireland – I’m not sure how this will hold up in a good hard shake. 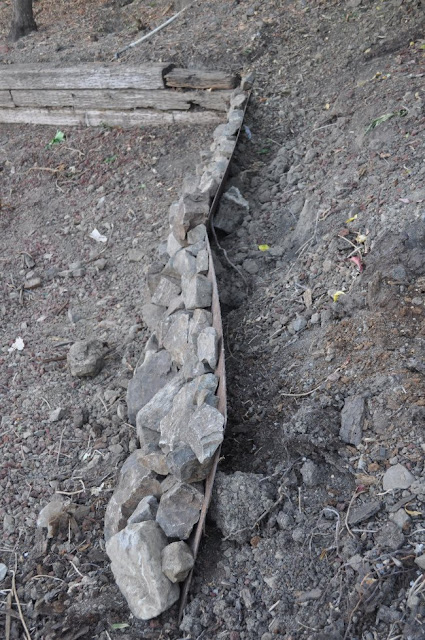 But I think it will look good when it is completely finished. 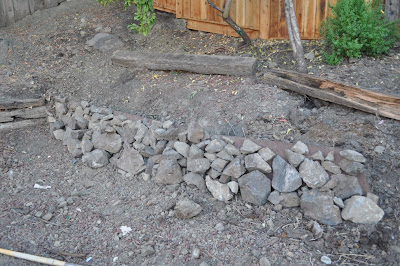 I quite liked the wall building and put together this cutesy one. 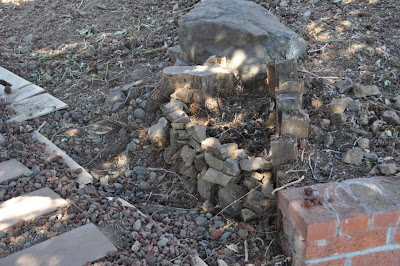 On Saturday, my husband and I went shopping to see how much the components for the hard-scaping would cost.  When we got home, our fabulous Al said, “Oh, I got a pile of old paving stones that you can have.  I don’t need them.”

There was enough for the little path we wanted to put in.  We put down cardboard as a weed block and recycled some of the copious amounts of red lava rock we have on the property. 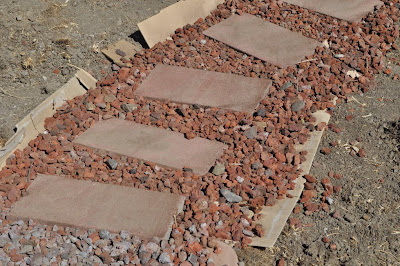 Laurie’s hubby asked my hubby  if we were going to “leave it like that?”  Then he decided that it has character.  He has a good point, but he should see some of the characterful roads back in Ireland – especially in Donegal! 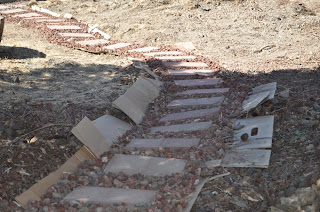 The cardboard will be  covered by mulch eventually.

My families business in Ireland is packaging sand and cement into small DIY sized bags for little jobs around the home.  The company is called GM Handipack Products – no connection to the lesser known car company of a similar name!  They supply DIY stores around Ireland.  In the past, I’ve never had to pay for sand – I’d call my Dad and he’d throw a few bags in the back of the car and bring them to me.  That was when I lived in Ireland…. It was a bit much to ask my sister (who now runs the company) to send a few bags to California for my patio area.

I scan craigslist and freecycle each morning in the hopes that I’ll get a bargain for the garden.  Sunday, I spotted an add for FREE SAND.  I couldn’t believe it.  Someone was emptying a play sand pit and wanted rid of it.  I arranged to go get it.

My husband was reluctant at first, asking, “How will we transport it?”

“Can you put sand in bags?”

So off we went.  The sand was perfect – not even dirty.  We shoveled about twenty pounds weight into each bag (free weights for the gym?) and got ten bags, taking the lot.  My dad would have been proud of us!

On Monday, I gave up on the wood chip guy and started again.  When we first moved in last year we’d had to take an old tree down.  I remembered the the company we used, Anderson Tree Care, had been really good.  So, I dropped them an email asking them did they deliver free wood chips.  They emailed back promptly saying yes, and they remembered me!  I called the office and Loosey answered.  I told her told the yard was completely bare soil, and she understood immediately that I needed the wood chips ASAP.  By noon she had a load for me!  An over-sized oak tree that had gotten too heavy in a school yard – no disease, and only the oak tree.  I was delighted.

Now, I have a pile in my driveway that is nearly the size of my house! 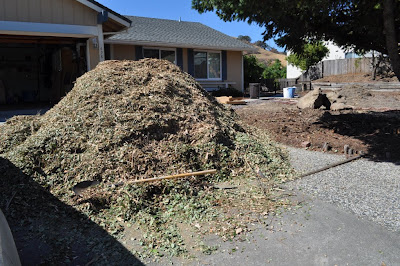 My first task is to dig out the car – no, just kidding  – I need to dig out the the wheel block for the truck that the driver accidentally dumped the pile on after he decided to move forward to release the last half of the load!  Thirty wheel barrow loads later and I still haven’t got it – its a kind of ‘needle in a haystack’ scenario!

Where the ivy has re-sprouted I laid cardboard and newspapers (where I needed more flexibility) under the mulch.  I was worried about how steep this section was, thinking the wood chips might slide down hill, but it was grand. 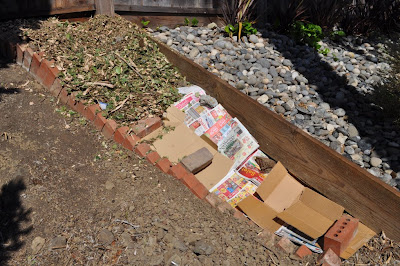 As I laid out the chips, I remembered to thank the big old oak tree for its life, and I promised to honor it with the beautiful garden it will drape over and around – eventually. 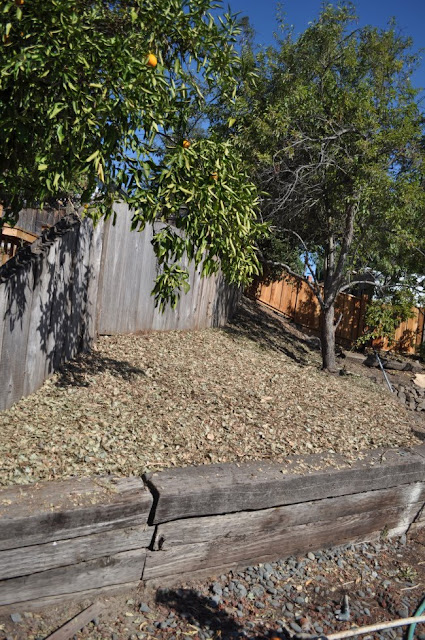 Trust me to get landed with a job like that in the hottest week we’ve had this year!  But Laurie was right – the universe provided what I needed for my garden.  And I need a workout too…if you want to join Byddi’s boot camp….well a girl can but try!

By the way, the mystery squash was a spagetti squash.  Congratulations to Gardening Jones and Miss Kat at The Curlicue Fractal for guessing it right.  Your prize is free use of the Shoveling Machine and Wheelbarrow Machine for as long as the pile of wood-chips last! 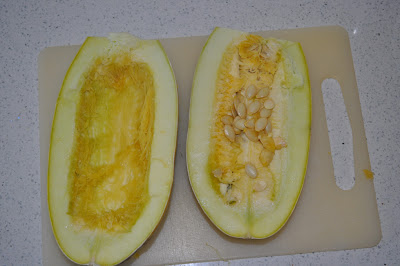 At least the back garden is providing the fuel that I’m burning off tending to the front yard.  That’s gardening for you – all about cycles!