Before I launch into my post for this week, here is my entry for the Gardening Gone Wild Photo Competition for August.  The theme is “On the road again”  and I’d have thought I’d have a load of photos for this theme, but I didn’t really.  I took this picture in Hong Kong and liked how the butterfly contrasted with the flowers.  Having seen some of the other entrants, I know I haven’t a snowballs hope of winning, but then again, it’s the taking part that matters – its a great competition too, and I love looking at the other photos.  If you have time jump on over there and have a look! 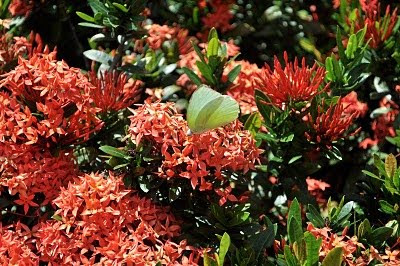 Back in March I began to pull apart our front garden.  To revisit the post I wrote then click here.  Basically, the front yard was a tangle of ivy, oleander and privet.  There was a neat little lawn in the center that we decided to get rid of.  As the blog says – we didn’t come here for the grass – keeping a lawn is simply too much effort for what you get in return.  It takes up too much water, you can’t eat it and it stays only one color, unless you forget to water it.  So, it looked as thought everything was coming out.

I used a lopper to take down the branches of the shrubs and discovered three fruit trees, a coyote bush and a wild rose bush – all plants I decided to keep.

The rose bush had grown skyward, so that it was about twenty feet high and lodged in the crown of the plum tree. 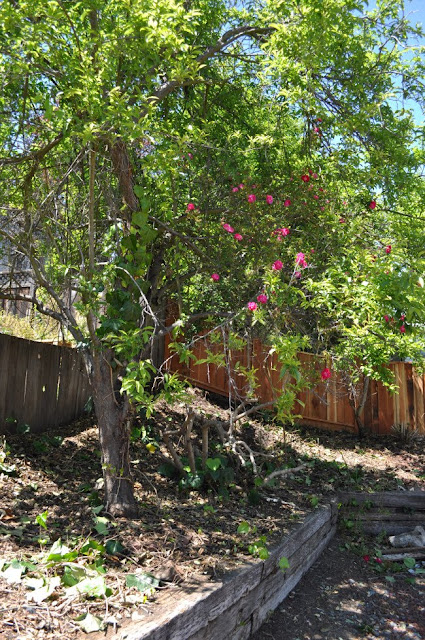 This exercise made me realize that I should wade in gently least there be more goodies hidden away in the jungle that poised as my front garden.

In one week, I went from this 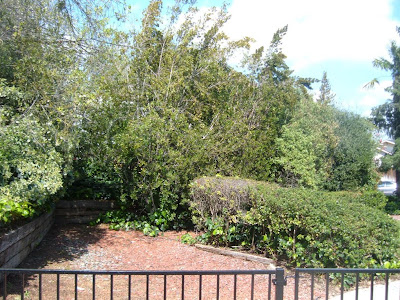 to this, by removing the privet hedge down the middle of the front yard. 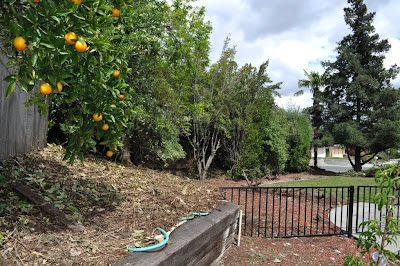 It had been suggested to me, by a person giving a talk about native gardens, that I hire some day labors and get them to dig out the ivy. Because the ivy was growing around the roots of the other plants I didn’t want to just rip  it out willy-nilly in case I disturbed something I might want to keep, so I started to literally pull it out myself, strand by strand.

It was March.  I planned to be planting my natives in October, so I had all summer.  I decided to tackle the job with the same approach one might eat an elephant – one bite at a time!  It was slow going and backbreaking work.  I also wore out four pairs of gardening gloves and gave my self blood blisters on the inside of my finger joints.  But it was a labor of love.

It took me the best part of a month to get this much cleared. 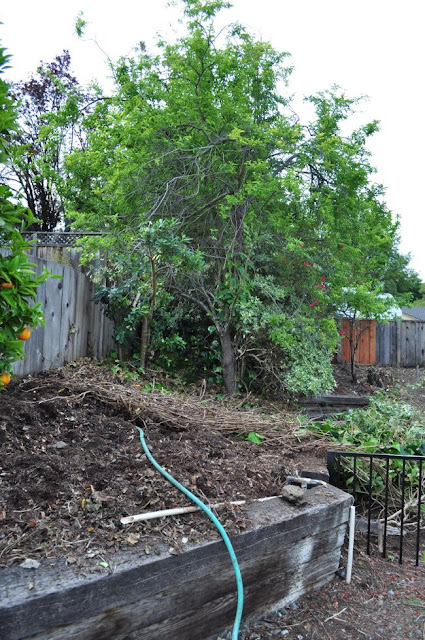 I found a hose pipe buried beneath the mulch.  It took me a week to dig it out!

I spent a day digging out one stump.  My backed ached and I considered that I was doing the equivalent of hard labor.  In fact, I’d have less work to do if I got a job or went to prison!  It was a mock orange and was I was told the privets would not give in so easy…easy?!  And I had ten more to do… 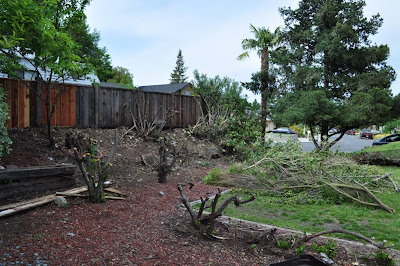 So, one day when I was hosting the garden club, Jon and Rosella noticed our stumps and said that they had rented a bobcat when they took out their lawn.  Jon even offered to drive it for us.  I was thrilled.  We agreed on a day to dig up the yard.  They recommended I use – A Rental Center, who gave excellent customer service.  The digger arrived on time and Jon got to work.

I had all the patio chairs on the font door step and the neighbors came over and watched.  Jon made it look easy and some of us even had a go.  It wasn’t that simple though… 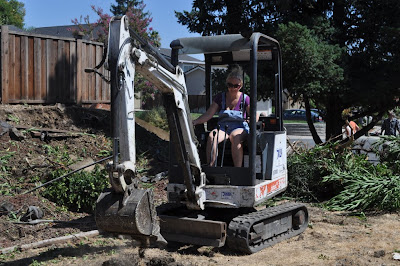 Four hours and $208 later we had accomplished what it would have taken me at least another six months to do, not to mention the money and time spent at a chiropractor for the backache it would have caused! 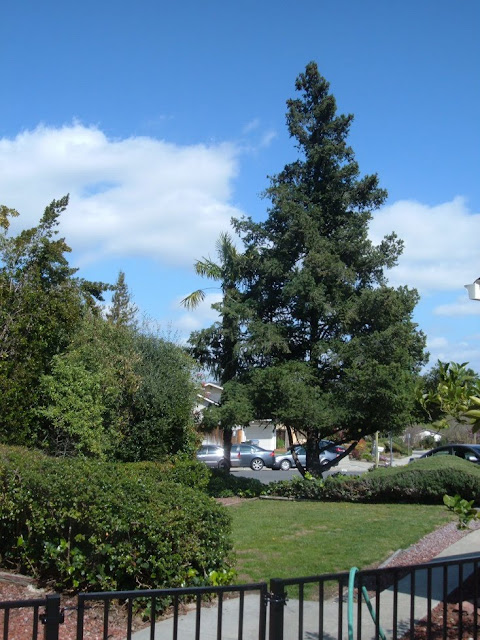 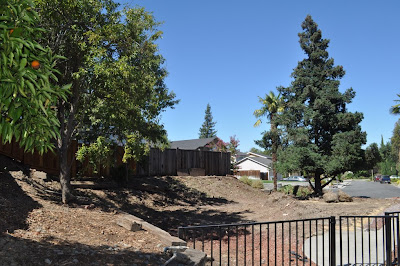 SO….many might say it looks like the aftermath to a nuclear holocaust, but to me it is beautiful – I can’t wait to start putting in a little path around the mound (that’s to add contour and drainage) and perhaps a gazebo with a trellis leading up to it…placed right in the shade of the plum tree. 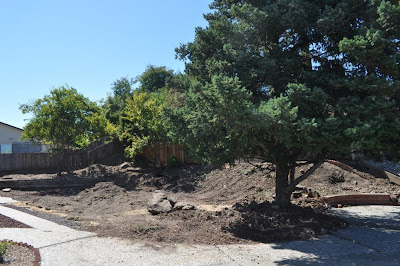 For plant ideas, I plan to read back through Christine’s blog, Idora Design.  Her blog has highlighted some beautiful native plant choices for the garden.   Besides being a  good read, she really knows what she is talking about and presents plant in a succinct and easy to understand way.  I get excited about my fall planting every time I read one of her posts!

I’m still trying to get free wood-chips for mulch that have been promised to me by a local tree care company.  They’ve been promising them now for two months – previous to this I wasn’t ready for them but I sure am now.  I may have to broaden my search…anyone any ideas (I’m in San Jose, California)?

7 replies to A blank canvas