Just when you think you have your day nicely planned, Mother Nature sees fit to throw a spanner in the works.  Monday, I was all geared up for a day at the computer, setting my world to rights – well, the world I’ve created in my novel, to be precise, when what should appear in my driveway but the cutest duckling. 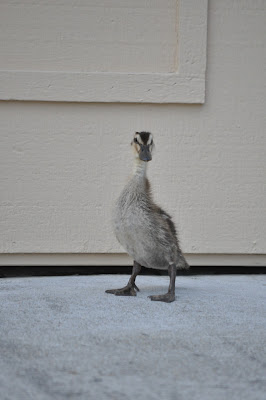 We just couldn’t figure out where he’d come from.  We are a couple of miles from any lakes, and there are some pretty dried-up creeks near by, but it was hard to believe that a Moma Duck would take her brood all that way.  So, while he settled down in the yard, I began to dream of the wonderful relationship we’d have. 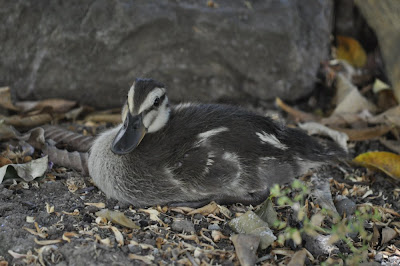 He’d eat my slugs and snails and turn them into fertilizer for the garden.  My conscience would be salved as I retired the squishing stick and all would be happy in the garden.  But there were a few major problems with this plan.  First, I was having trouble negoiating this deal with the fretful abandonned duckling.  He wasn’t too keen on staying still, and I worried that he’d stray into the neighboring yards with their dogs and cats etc. 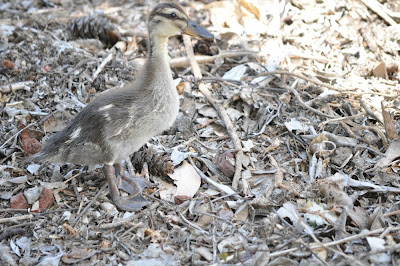 And when he wasn’t in the neighbors yards, he was out on the road.

I used to volunteer at the Silicon Valley Wildlife Center when I first moved to California.  I know that many animals are “over rescued” and I didn’t want that to happen here.  He wasn’t injured, and Moma Duck may still be around, so Karla and I followed from a distance while he went looking for Moma Duck. 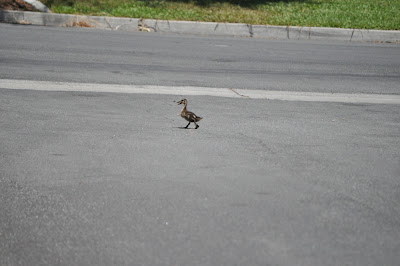 After a while it was obvious that the little guy did not have a plan in mind.  It was getting too late to take him to the wildlife center, and we were worried about him getting eating during the night by any one of a list of other beasties, so we caught him in a cardboard box while Al went and found the makings of a pen for him.  I checked out duckiling care online and chopped up so fruit and veg for him.  Moma might still come back…but it was looking unlikely.

We decided to place the pen by the compost bin – why not get the benefits of the duck eating slugs for one night? It had to be secure enough to prevent cats and raccoons  getting in.  The pen is the white thing on the left! 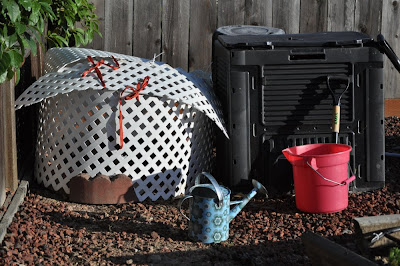 The next morning it was off to the Wildlife Center for the duckling.  Even if it wasn’t illegal to keep wild birds as pets, it would not sit well with me to keep a duckling by itself in a garden with no pond.  Maybe some day I’ll get myself a couple of duck eggs and hatch me some domestic ones.  All things considered, they are a much more sustainable pet than a dog – and they quack loudly at intruders, I’m told.

I asked my husband could I have a duck for Christmas, and he replied, “Do you want it roasted, baked or barbecued?”  – Nuff said!

Mother Nature in her kindness, did not leave me totally bereft.  We have the pleasure of a baby bird, in a nest conviently situated at eye level.  I reckon it is a Mocking Bird and his parents may even be the ones I photographed making eyes at each other in The Birds and The Bees post!  He is one demanding baby, squawking all day for food, which is how I found him – I followed the noise.

Though the nest is low, it is very well hidden, and I don’t want to disturb it, so getting pitures is tricky but I persevered.  Here is, quite literally, a birds eye view. 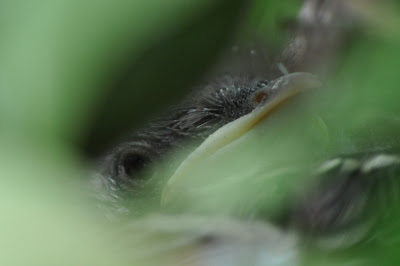 When I first looked in, it was hard to see anything other than a jumble of feathers. 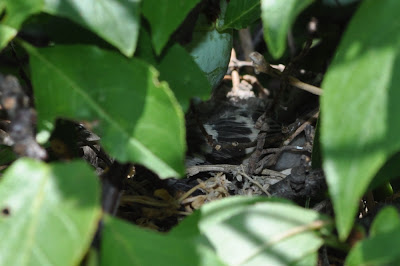 And one more view: 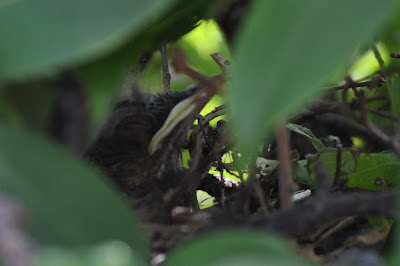 After the duckling left, I had to dismantle his wee pen, wash down the components and in the process decided it was time to water the compost bin.  I have been remiss about this so I put the hose pipe to work.  Minutes later a micro drama began to unfold.  Ants had set up home here and they were now the victims of a flood.  Colonies of them streamed out from the bin in all directions resembling refugees fleeing thier homes.  Many of them carried bundles, which looked as of they were trying to save their possessions, but on closer inspection you could see that some where carrying pupae and others, bundles of what looked like, eggs.

I could imagine them yelling to each other “Save the Children!” 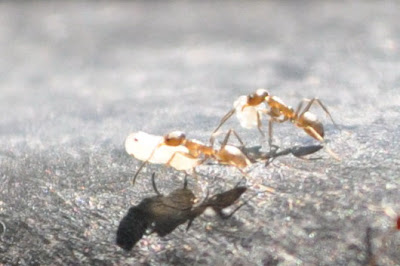 Ants fascinate me.  They look out for each other and work together for their common good in much the same ways that bees do (being social insects). Here, they seem to be rescuing each other from a mere drop of water to us – a deluge to them… 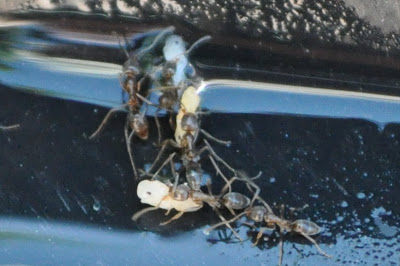 Much as I hate the idea of aphids on my plants, I hold a begrudging admiration for their aphid farming – I mean, seriously, micro-farms, cute and clever! 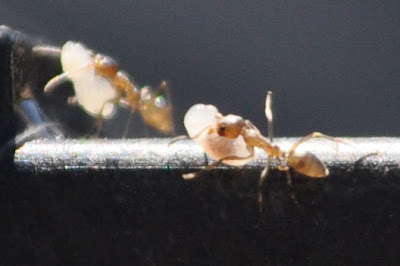 Ants work so hard too.  You never see them at rest – which accounts for why my photos are a little fuzzy! 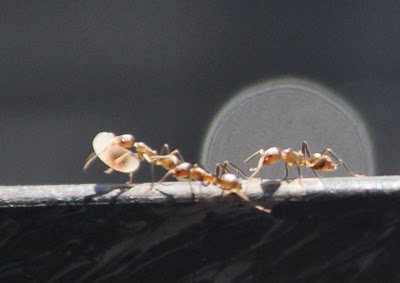 This one seems to be thinking about throwing the “baby” to safety! 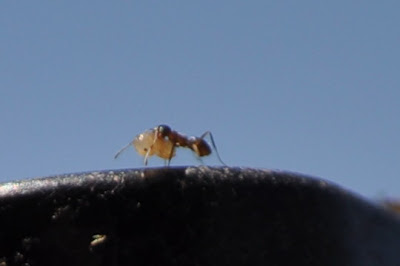 And it looks like this bigger one is the Queen, with her entourage! 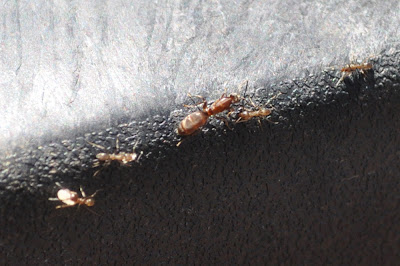 It seems that if you look closely enough there is always a drama going on in my garden!

11 replies to Pulling the chicks and other babes…