It is with great irony that I submit the following photo to June’s Picture This Photo Contest over at Gardening Gone Wild.  Though this guy is our sworn enemy, I submitted this shot, from The Peas Treaty post because I like a photo that “speaks” to me, and this one says “Who? Me?” 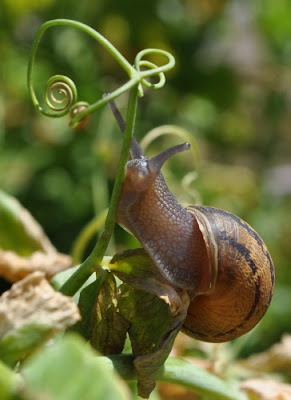 Doesn’t it look like this snail is pole dancing?  Or is that just me?  I’m not really expecting great things with this months competition – the theme is “Best Frame You Have Ever Created” and some of the other entries are amazing.  Besides, most gardeners will see this and shudder, so no, I don’t think this is a winning shot, but as usual, I’m aiming to make people smile – the winning isn’t that important to me.  Well…I try to tell myself that!

So, back at the ranch…

We found the snail mother-ship and have deployed the “squishing stick” to destroy the enemy .  They were all huddled along the outside of my compost bin – I had put them inside it, in line with the terms of the Peas Treaty.  Now, that they have broken the treaty, it is all out war (they were put in the compost bin to eat the stuff there in return for their lives being spared!) – no snail or slug shall be spared (not even the photogenic ones!) 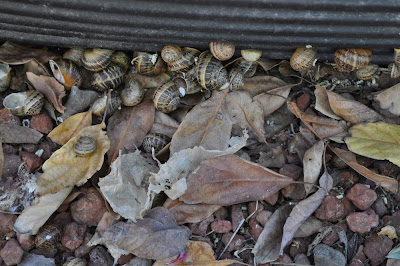 Is it any wonder I lost so much vegetation to these guys – look how many there are! Even with all these dead, I still lost a seedling last night…

Then we had a swarm of bees in the garden.  This, I don’t mind.  In fact, I even invited Karla and Al over to watch it. 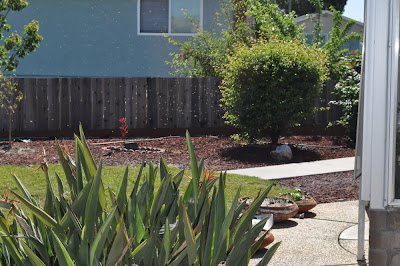 This is the long distance shot before I plucked up the courage to get closer – bees don’t want to sting me – or so I’ve been told. 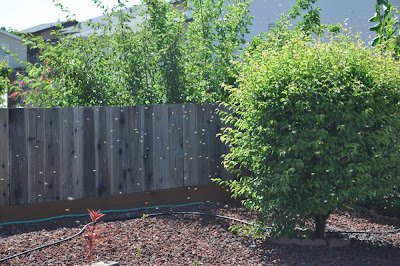 Al pointed out that there were no bees in his yard. “I use Miracle Gro!” he said, “This is what happens when you go all organic!”  We had a good laugh about that – he is funny!

Nonetheless, staying true to organic gardening has paid off.  The mulching has done the job, and my veggies are taking off. I now have giant onions.  The bees love visiting these flowers and I’ve begun collecting seeds from them – I’m not sure if they’ll germinate.  I can but try… 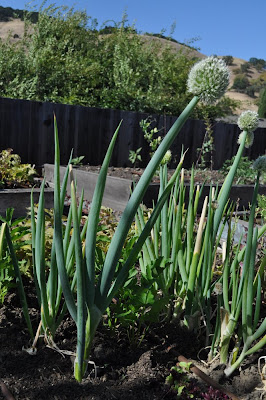 I replanted some zucchini and butternut squash seeds when the slugs and snails ate the plants I cried about in the last post.  They have germinated in double quick time.  As an experiment, I planted one seed inside an empty toilet roll for protection from our slimy enemies – let’s see does that work! 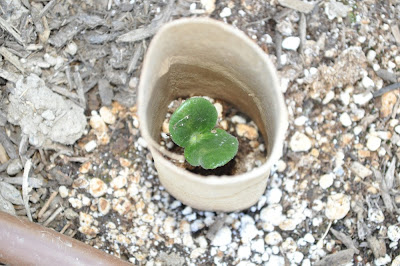 The most recently planted potatoes are looking great.  I planted them over the top of an old tree stump to stop it from sending out suckers. I put newspaper around these seedlings to stop privet and heavenly bamboo from regrowing, and they are doing really nicely – I think they are either melons or squashes or one of each- my labels got lost! 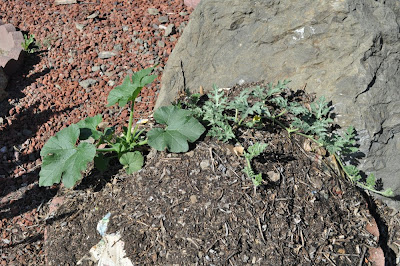 But my biggest achievement to date are my parsnips!  My mum told me they are very hard to grow and I probably wouldn’t even get them to germinate.  It is a rare occasion when I prove my mother wrong. 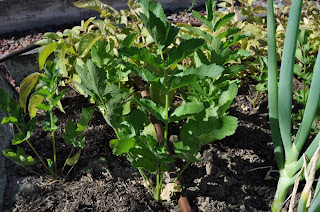 Now my problem is figuring out when to harvest them.  Does winter still mean winter in California?  Won’t they be massive by then – the foliage is nearly a foot tall.  Maybe the root doesn’t start to develop till fall (autumn).  Can anyone advise me on the peculiarities of parsnips in California?

No problem knowing when to harvest these cherry tomatoes though.  And boy, do they taste good! 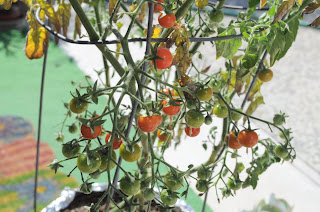 And just look at what my corn did!  It reminds me of a sea anemone… 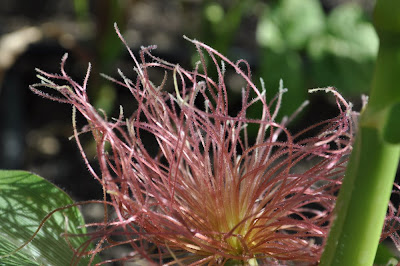 And finally, I’ll leave you with one last organic success story from my garden – the Crepe Myrtle came down with a heavy infestation of powdery mildew.  Al offered me some stuff to spray it, but I declined and after some online research, came across a recipe for a spray to treat the problem as follows:

To control powdery mildew on plants, mix together:

Lots of the recipes say one tablespoon of baking soda, the recipe I used called for three.  It says not to store the unused mixture though I did, and I used it on a similar looking fungal infestation on my pea plants – I think it has worked, but it may need another application…

In the meantime, the Crepe Myrtle was so happy it blossomed! 16 replies to We have lift off!