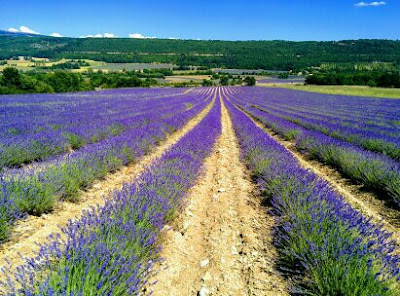 Back in California, I grew five different varieties of lavender. I had lavender which “naturalized” in my back yard and spread. I even experimented with lavender in cooking and baking – with great success. Here are links to the posts with those recipes.

Orange and Lavender – A  Culinary Combo

So, when we decided to move to France, the number one trip on my list was to go see the lavender fields in Provence. 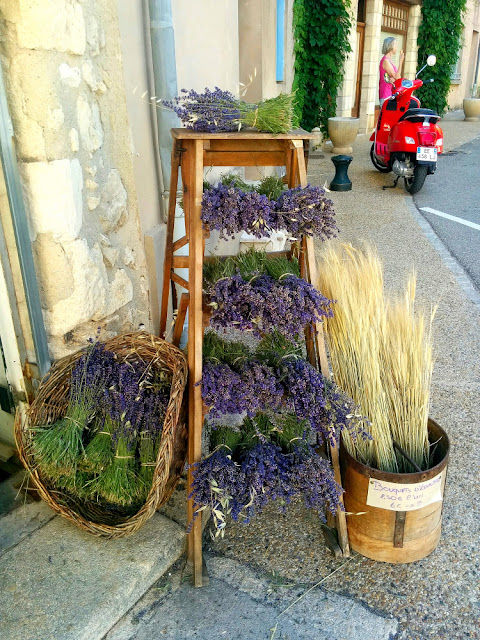 We took a Ouigo TGV Train from Gare de Marne la Vallée Chessy, the station one would take if one were (crazy enough) to go to Euro Disney. That station is hectic – a disaster waiting to happen!

The train has no frills but is clean and comfortable. You can’t buy food on board so bring a picnic. It took 3 swift hours and cost in total  €100.00 between us- i.e €25 each way per person. At Aix-en-Provence, we picked up a car at the train station – the cutest little Fiat 500!

(Father Ted fans please note: The car is NOT very far away!) 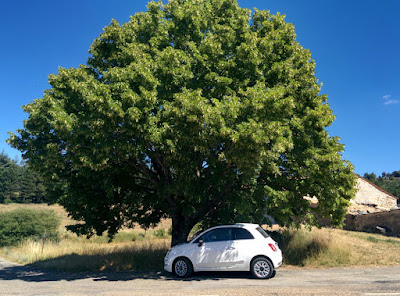 The hotel, Garden and City, Puyrichard, was on the outskirts north of Aix-en-Provence. Knowing that we’d be arriving in late, we guessed correctly that the shops would be closed (we consistently guessed incorrectly when they’d be open for the whole trip) so we availed of the pre-order in-room breakfast offered by the hotel. We were so disappointed with the breakfast. I was expecting fresh coffee, huge flaky fresh croissants and perhaps freshly squeezed orange juice. That’s all. I don’t think I was asking for much. It was rural France the home of fresh baking and farm produce…

Instead, we got a melange of pre-packed produce so pumped full of preservatives it would likely outlast the human race!  There was (per person) :

(Father Ted fans please note: The croissant is NOT far away!) 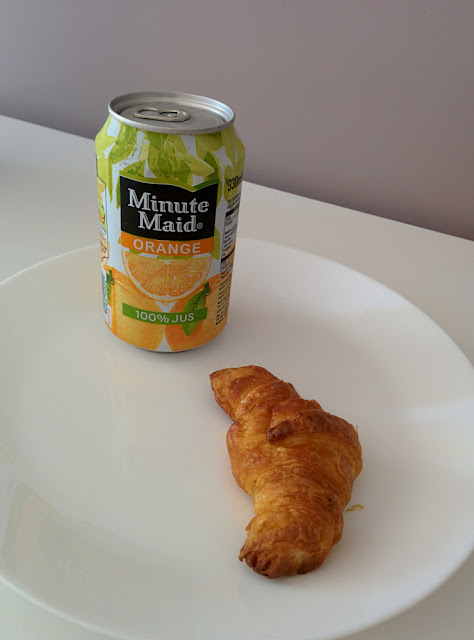 The hotel room – a superior studio and not the smallest or cheapest one on offer – was smaller than we thought it would be.  The room next door was slightly bigger. I could see because housekeeping had propped the door open, and I had helped myself to a good old gander. So I went to reception and spoke to the girl there. She claimed that all the rooms in C block (our block) we’re all the same.

“So,” I said, “could we please move into the room next door?” The layout was better even if it were the same square footage.

But I saw it was empty. It was 11 am and check-in was specifically noted at 3 pm.

“But they haven’t checked in yet, ” I said.  “They could switch with us… seeing as all the rooms are the same.”

“Oh but they have checked in,” she said.

Hmmm, someone was telling barefaced lies but how does one counter that. I left silently seething and cursing the woman in my mind. After all, the room we were in was fine. We weren’t going to suffer. I was madder at being lied to, than being denied. I had just wanted the other room with that extra little space for sitting by the window… After all the view was lovely. 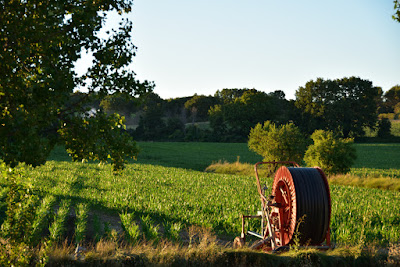 After my seething session, (that My Husband bravely bore the brunt of) we decided to head north to Pertuis, a pretty little town where we managed to catch the only lunch of our entire trip. We kept missing when Siesta time was – it was different in each village! The whole thing seemed so complicated – it was easier to not eat. 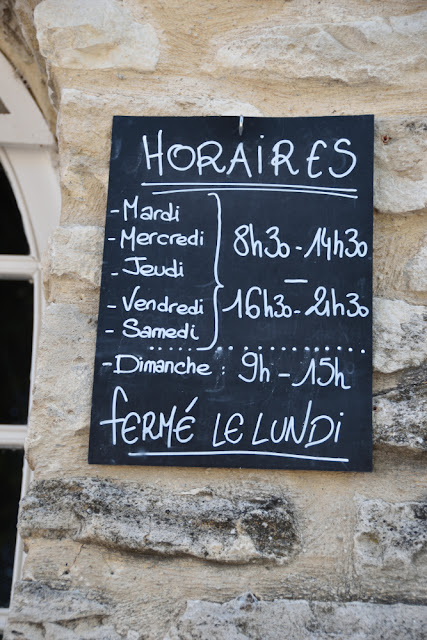 Then we went to the tourist information office to find out where the best lavender fields were. 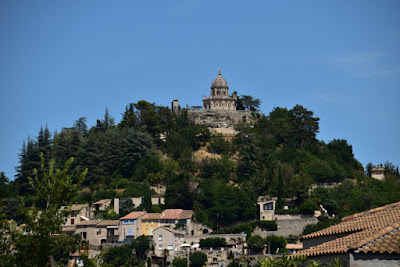 The lady in the tourist information office simply didn’t get the concept. We wanted to see vast fields of lavender and she insisted on circling cute little towns on the maps. Thanks but we didn’t want that I told her.

“But they are the most beautiful towns in France,” she said.

Stuff that! I wanted to see lavender… I didn’t say it like that. Maybe I should have because she began to circle castles….No! Been to the Loire Valley and all castled out. Lavender please… She assured us we could see some lavender here too…but some wasn’t gonna cut it! I wanted to see loads of lavender. 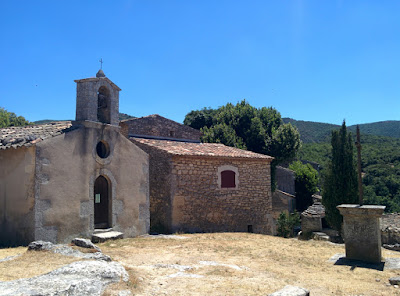 But we followed her advice and saw a few cute (closed with a “Walking Dead” feel to it!) villages. 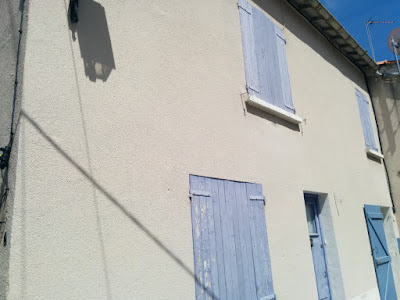 We weren’t sure if anyone actually lived here. Even the towns that seemed to be inhabited were sleeping – their shutter-like eyes closing the world out. 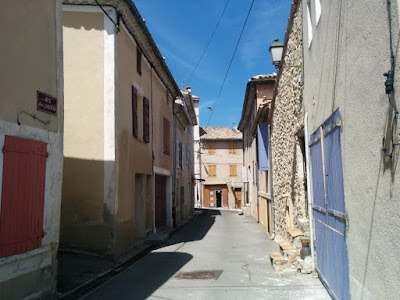 It took “sleepy” villages to a whole new level, and I can’t say I felt comfortable or even welcome here. This snooze level just wasn’t for me. 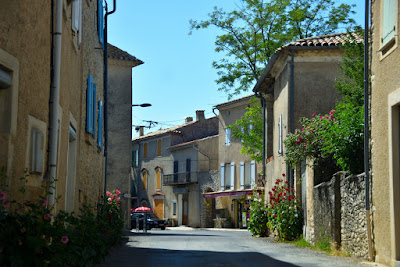 In the distance, we saw a big white mountaintop and decided to drive to the top of it – because it was there – quite the accomplishment in a Fait 500! 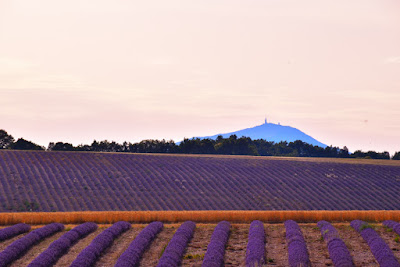 The views from the top of Mount Ventoux were spectacular!

The top was bare white scree and I learned that it had once been forested but the trees cut down in the twelth century for lumber. The soil eroded and now it has a moonscape! 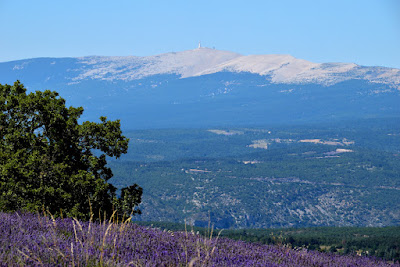 The lavender fields around were small, pretty… 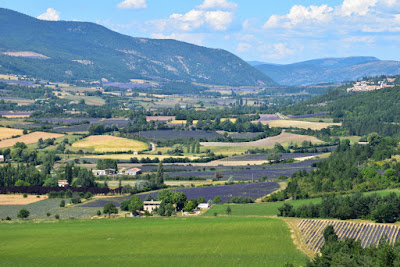 …but not the one I’d seen in the photo that planted the idea of the trip. 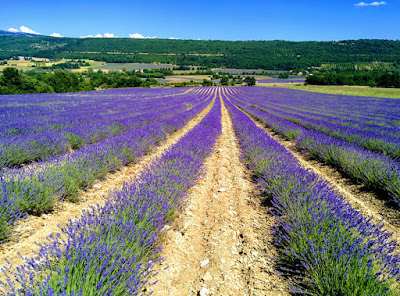 I wanted lavender as far as the eye could see – Not enclosed by green fields. 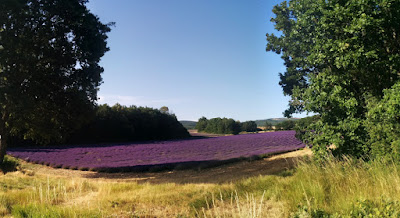 I showed My Husband the photo in the article I’d read online. He was able to track down the location through the embedded data. We had a town name, Revest, which cross referenced a road number D950…. 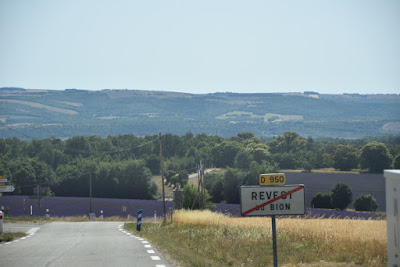 We were back on mission. 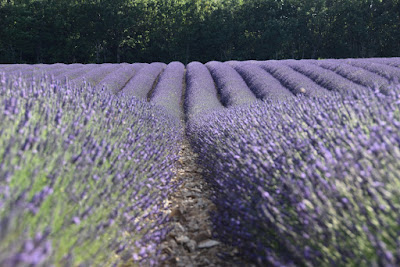 The lavender in this region was more abundant. 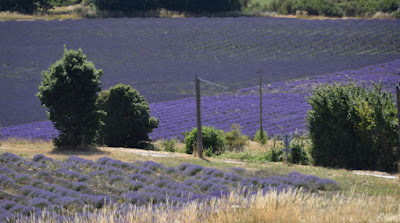 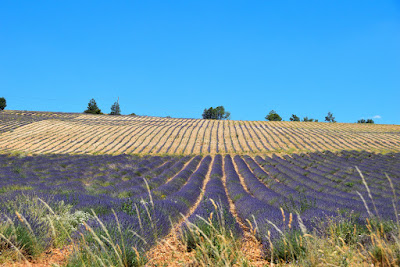 We wound back and forth on smaller roads that criss-crossed the D950 and were able to get close to huge drifts of lavender. 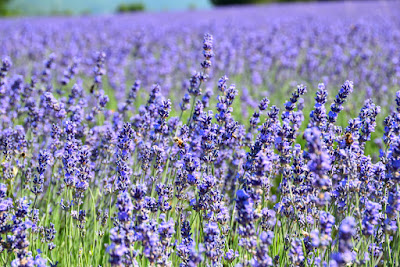 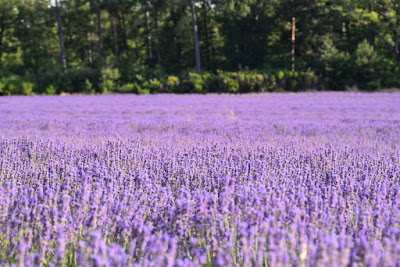 Smell – the air is laden with scent. 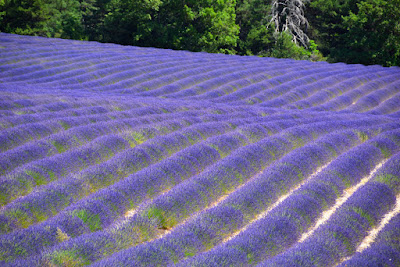 Sound – the buzzing of the bees. So good to hear the air thrumming with these happy bees! 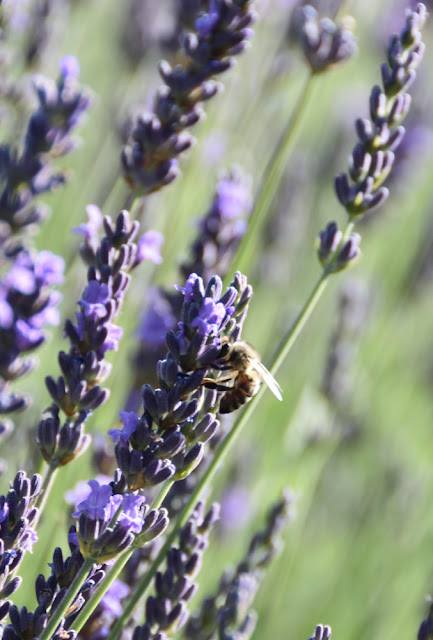 After a couple of days of satisfying lavender viewing, we were ready for a change of scene. We headed south to the little town of Cassis on the Mediterranean to pick up the start of the coastal route D141 to Ciotat. I’ve never seen seaside towns so full to the brim of people. We vowed never to hoilday again in July. (It’s the bonus prize for being childfree!) 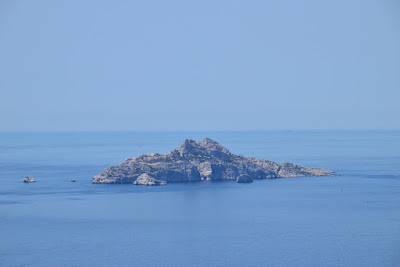 The views along D141 were spectacular. 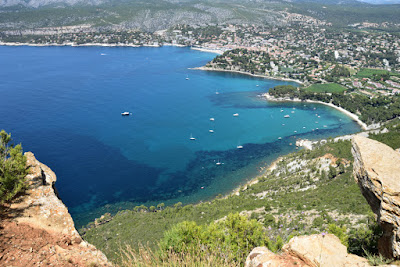 With some interesting rock formations like this natural arch – which made us think of Natural Bridges and Arches Nation Parks in Utah. 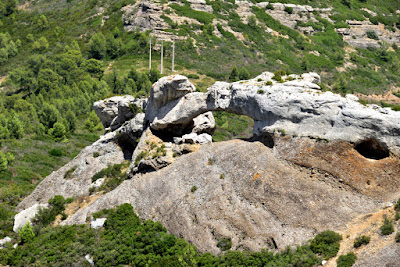 We found a disappointing cafe in a cove near La Ciotat – disappointing because despite finding parking and the cafe actually open, the lunch was served to us in a cardboard box! It was like something you’d buy for an office lunch out of Marks & Spencers. We were destined to not partake of a classic Provence lunch – unless this was the clasic Provence lunch?

The cove itself was beautiful and we watched people cliff diving from our lunch perch. Full marks for view. 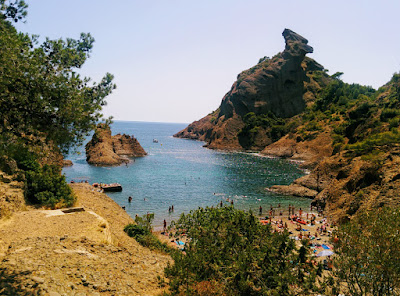 We returned to our hotel with the last night to enjoy the peace and quiet of the Provence countryside before facing the crazy noise and rush of Paris. 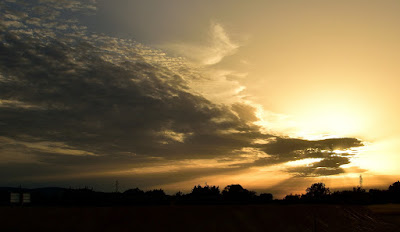 Will we go back to Provence? Mmmmm – we-l-l we still have a lot to see in the rest of Europe…