On our first visit to Versailles we didn’t make it to the Queen’s Hamlet, nor did we on the second visit, but third time was the charm! 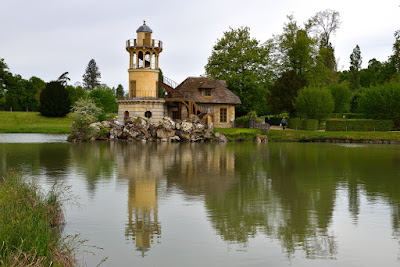 The Queen’s Hamlet was built by Marie-Antionette so that she could “…play at being a peasant,” by some accounts. A disgusting idea when you consider the reality of life as a peasant in those days. As we all know things didn’t end so well for Marie-Antionette, so I decided not to lose my head over her crassness and go see the place!

The pamphlet handed out at the site merely describes the Hamlet as a place where the Queen could “enjoy the pleasures of the countryside with her children.” Because when you are that rich life can be burdensome!

We took the train and remembered to buy a return ticket in Chatelet – actually, we just bought four tickets preparing to chalk it up to experience if they weren’t accepted by the machine in Versailles – but to our great joy (as we swanned past the 100 or so people in line to buy tickets at the machines – I kid you not – 100!) our tickets were accepted. We got first choice of the seats on the awaiting train homeward bound!

The queues were pretty brutal going into the Chateau of Versailles – we were glad we’d ticked that box already. We have bought the annual Duo ticket which allows us to skip the lines, but it would have been uncomfortable inside the house with those crowds.

To a soundtrack of classical music piped into the gardens, we made a beeline straight to the Girandole Grove aiming to have lunch first in Brasserie De La Girandole. The prices are reasonable here (considering where you are) and I had the best hot chocolate I’ve ever tasted! It was delightful sitting under the covered terrace listening to the light rain pinging off the canvas, with the gardens on all sides. The conversation came up again about Marie-Antoinette’s motivations for building the hamlet. Sitting there under the canvas, being reminded of camping trips with the Girl Guides in my youth, I wondered were we emulating her crassness by going camping in a world where people were forced to live under canvas through war and poverty? I decided that camping was different. We go camping to reduce our costs and in some cases to get close to nature and have no other option – guilt trip avoided…for now…

After lunch, we wandered into the Colonade Grove, and discovered a circle of what looked like giant cake-stands, with a big statue in the center. As I was taking this photo… 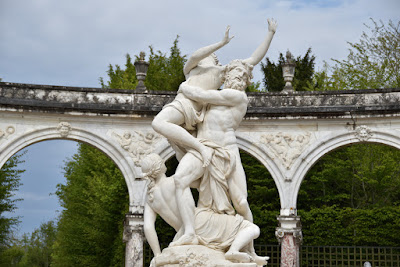 …I heard a whistle blowing. Vaguely wondering what it was and hoping it wasn’t a demonstration (the French would demonstrate at the drop of a hat) I refocused my efforts on photography, then all of a sudden the cake-stands turned into fountains – all of them at the same time! 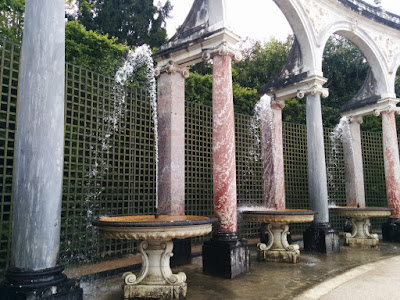 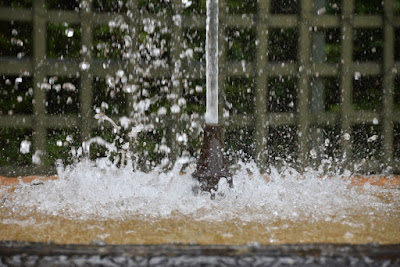 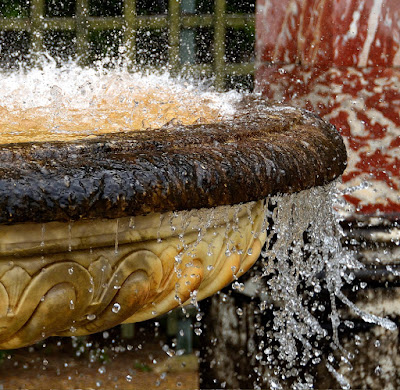 I captured a heart in this fountain. 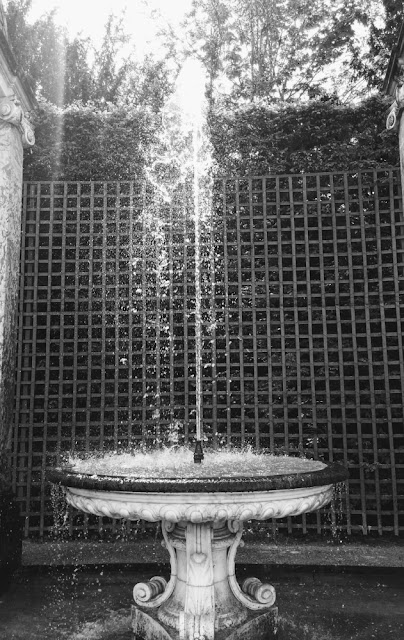 Eventually we dragged ourselves away, still hoping to accomplish our mission of actually getting to the Queen’s Hamlet that day, yet stopping quickly at Appollo’s Fountain to grab another few snaps. 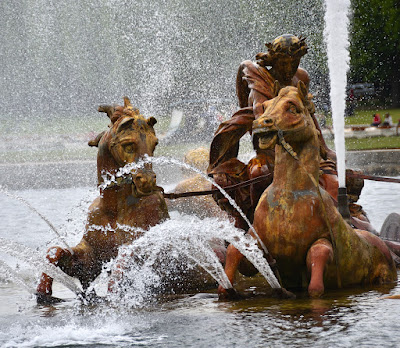 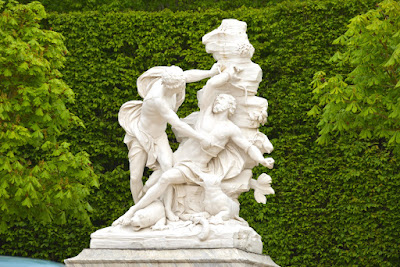 …but we were determined and eventually got there. We flashed our duo cards and gained admittance but weren’t sure if you needed to pay or not! I think we just like showing off.

With significantly fewer tourists about, we just loved this area of Versailles. The day was overcast but the grass still vibrant green.

The Queen’s Hamlet really was a fairy-tale village. 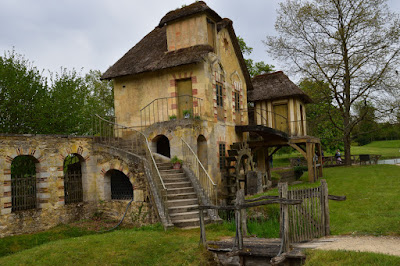 The largest building in the Hamlet was under renovations and all covered up, wrapped like a big present. I’m looking froward to coming back to see it another time. Not one to re-invent the wheel, I’m just going to include two links to great blog posts I found about the Queen’s Hamlet:

This one has beautiful pictures and a nice round up of practical information at the end.

I enjoyed this one, laden with historical information.

There was lot of wildlife too. I thought this was a beaver but have since learned it may be a thing called a ragondin. 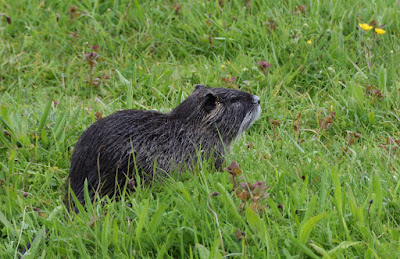 These Coot chicks were really cute! 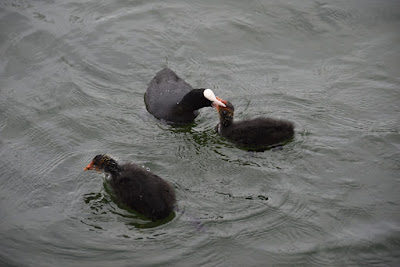 And a family of geese. 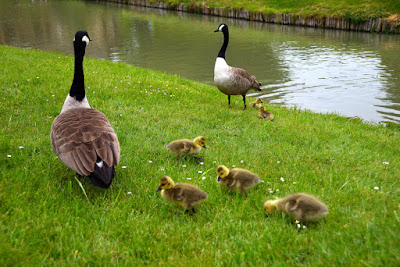 I just adored the wee houses – all of them. 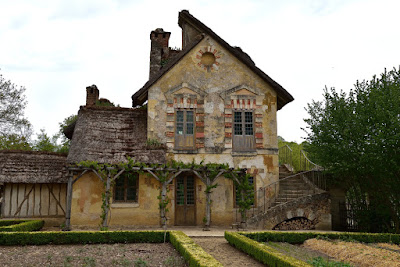 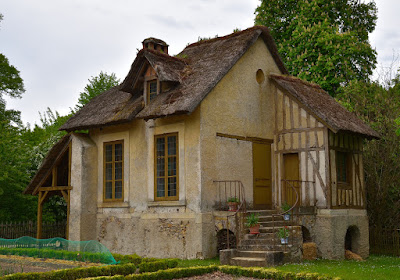 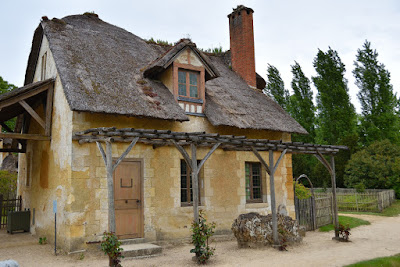 They even had an apiary. 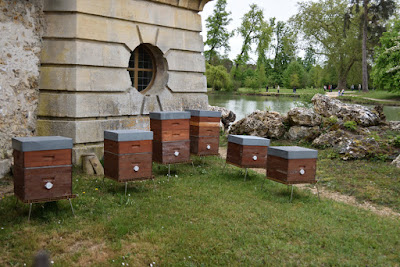 You won’t be able to see everything that Versailles has to offer in one day, but if you have to pick one thing and the weather is nice – do this. Yes, the house is spectacular – if the line is not long (which is usually never) run in and see the Hall of Mirrors then head down to the Queen’s Hamlet. Hmmm… but then you’d miss the gardens, and the fountains and …

Okay – Versailles – only one thing for it – come early and come often!

4 replies to The Queen’s Hamlet at Versailles