Today we had a choice – we could shoot straight for Bend, Oregan along Hwy 20 and be there in 5.5 hours or go on hwy 26, adding an extra hour to our drive but taking in the John Day Fossil Beds and The Painted Hills (no… not the Lassie movie!)– aka the John Day Nation Monument. The choice was obvious – gotta do the National Monument!

This felt really off the beaten path. Hwy 26 was just a normal two–lane road that even had bends in it as it snaked between onion fields. 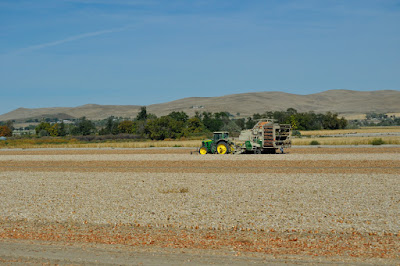 We felt like explorers which was pretty apt since we were going to “John Day“ an explorer from the 1800. The story goes that he and a fellow trapper/explorer while in this area were set upon by thieves who stole their clothes. John Day and his friend lived to tell the tale. Every time they passed that bend on the river, John Day pointed out where they’d been robbed, until eventually the river came to be called the John Day River.

I can just imagine John Day doing that. My father used to always point out bits of the road between Armagh and Dublin where he’d had things happen to him. Fortunately, none so bad as being robbed, but there was the place where he discovered that the cap for the gas tank on his lorry was missing – N2, Collon, Co Louth – I can see it in my minds eye even now! Or the place just north of Dublin, outside the airport, where the cyclist behind him ended up in the back of his pick-up truck! Funny though, no part of the road to Dublin is called after him... maybe you need a near death experience for anyone else to take notice, though I’m sure that cyclist might qualify! Anyways,  like my father, it seems John Day was quite the character.

Such excitement in the car when we came across this sign. Time travelers as well as explorers! 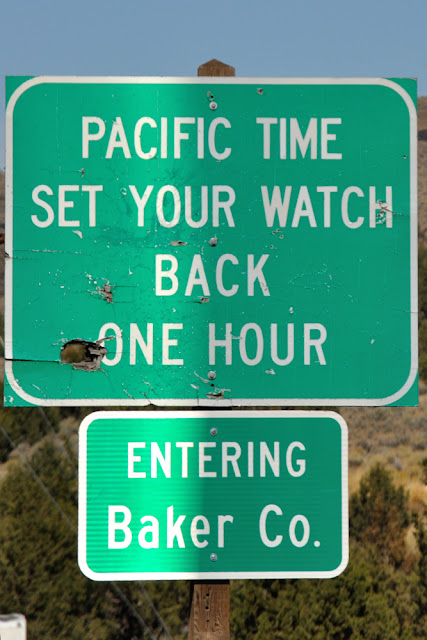 We found this little series of messages  so nice. Such good manners! Not sure if we were in Idaho or Oregan at this stage. 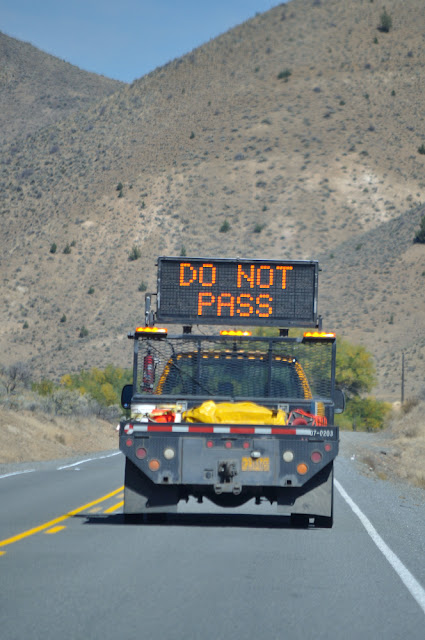 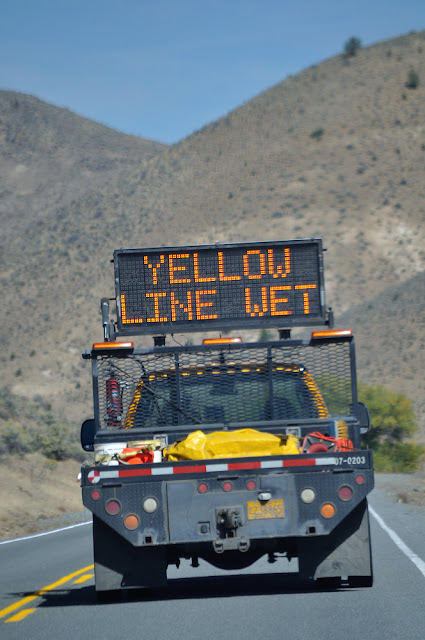 Oh! Thanks for letting us know! Will you be long? 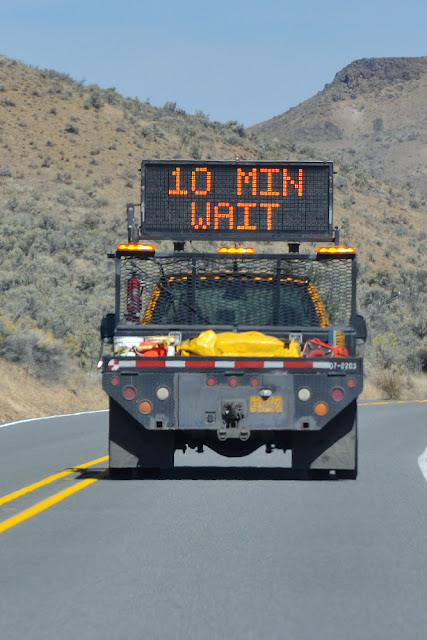 Grand so, we can wait!

The driver was grinning when he pulled in off to the side and we passed him waving frantically. We were the only car on the road. The only vehicle we’d needed to pass was his! 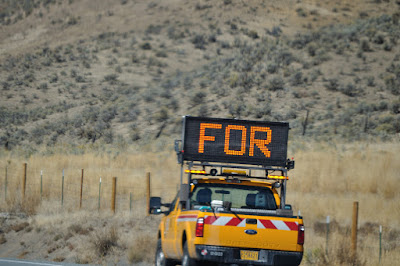 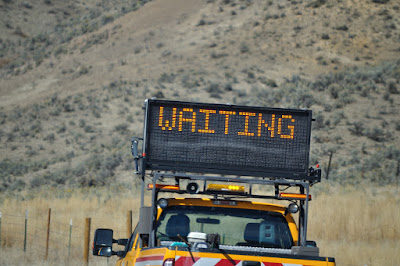 We passed this herd of cattle and wondered at the strangeness of humans who stop their cars to watch herds of bison but not their distant cousins, from who they get so much, milk, meat, even clothing. They did look pretty cool out their doing their thing, we thought. We wondered if we stopped and took pictures would other cars stop too. 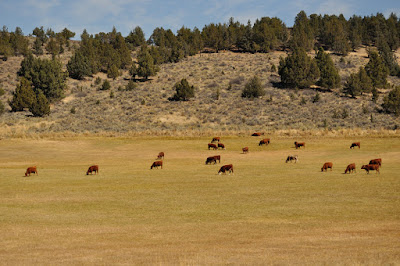 We never found out. There were no other cars! In the distance, we did see a truck come out from a huge cleft in the rocks and realized with excitement that our road was taking us through it. 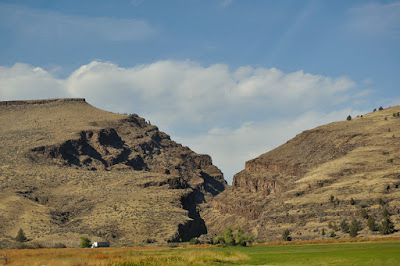 It was like traveling through a magical portal to a land that time forgot. The hills around us had basalt rocks that reminded us of the Giant’s Causeway on the North Coast of Ireland (though not as good – obviously!) 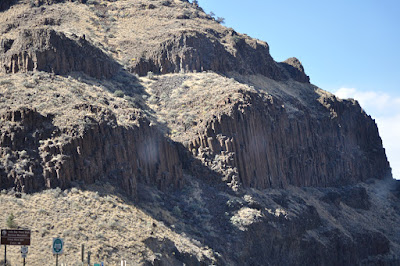 And these green rocks…could it be huge deposits of malachite, copper carbonate deposits? 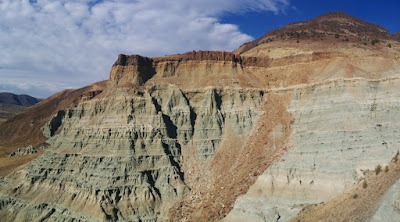 I’d taught this in chemistry in my old life as a science teacher, back, what feels like, a hundred years ago! 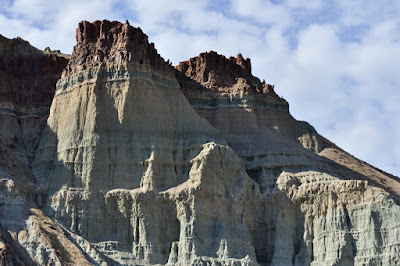 At the Thomas Condon Paleontology Center (Aka the John Day Fossil Beds visitor center) I learned that the green rocks were not malachite. In fact, they were a celadonite, but the ranger said everyone asked that question and she had a nifty poster to explain. Here’s the science… 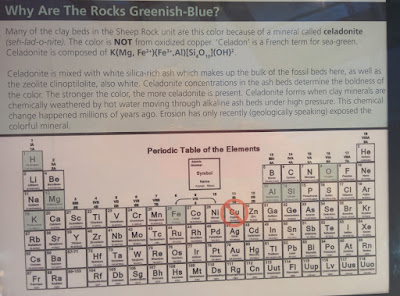 The fossils we would see here were those of ancient mammals. Oh my god, I love all this stuff – My Husband… he’s kind of “meh” about it, but it feeds my imagination. I just yearn to have a time machine so I could go back and witness it for myself – but still be home in time for tea, of course! 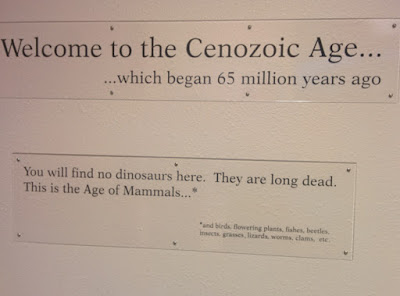 I thought they did a great job with the art work! 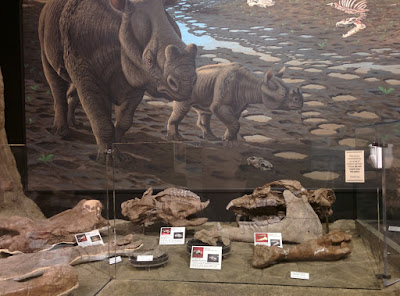 I sure hope they had a good dental plan back then! 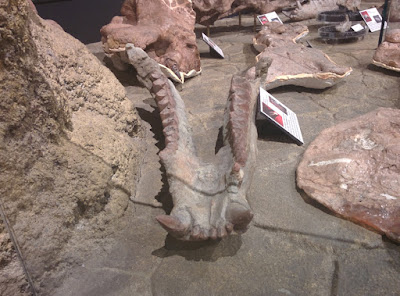 Don’t think I’d have liked to be the dentist though. 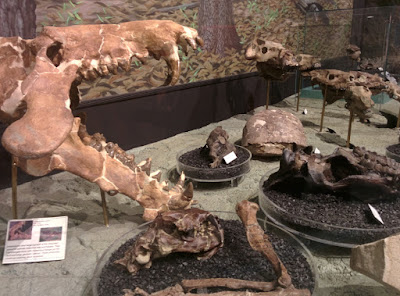 Our next pet will be a Toy Sabre-tooth Cat. Meow! How cute would that be? 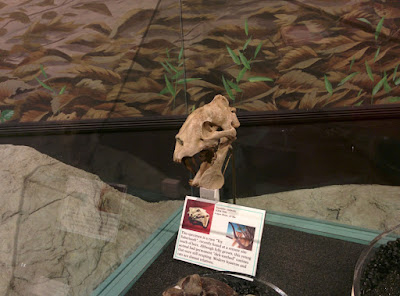 Come to think of it though My Mum’s cat, Cheekyboots, might just be one! (Little monster.)

Even the insects that got smooshed on our car here were like palaeomegalithic (okay, I did just make that word up!) creatures, providing a meal for the local carnivorous wasps. By now, our car qualified as the dirtiest car in the USA. It was getting hard to see out the windows! 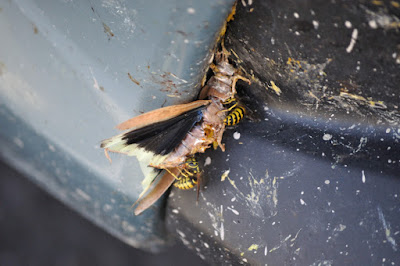 Next stop – the Painted Hills. Layers of iron compounds laid down as the earth’s climate changed from very wet to very dry resulted in the iron ions forming different colors. Red is the rust we are most familiar with but there are greens and yellows too. The black may be manganese compounds, concentrated by manganese-fixing plants that were around at the time (apparently there are similar plant now that do this same thing.) 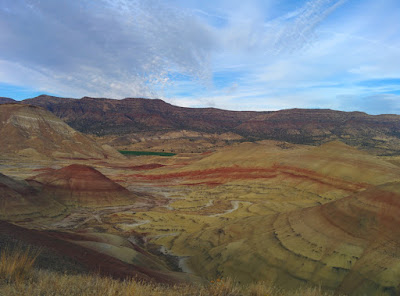 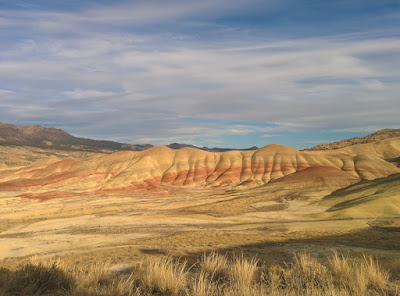 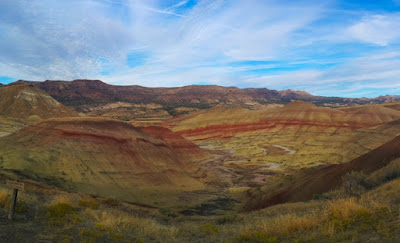 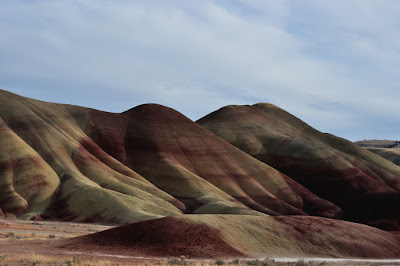 And in case you were wondering, as were we, why nothing grows here… 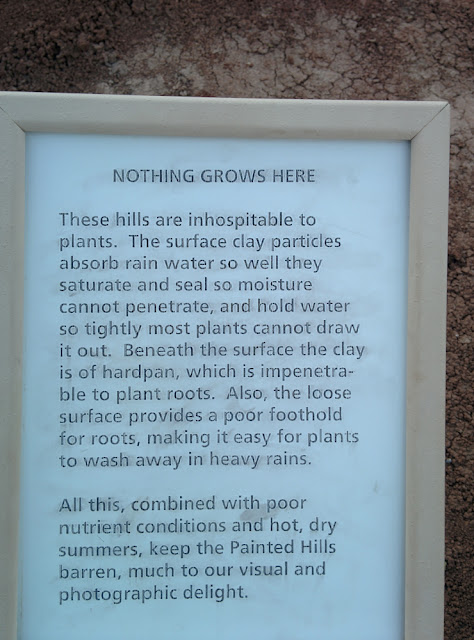 A long way out of our way today but so worth it! As we were still heading west we got to watch sunset through a bug-bleary windscreen as we drove. 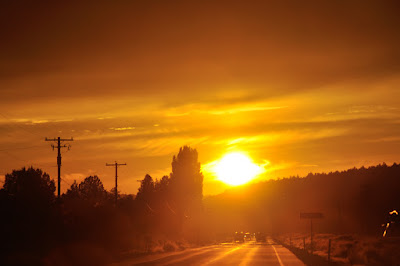 2 replies to John Day Fossils and the Painted Hills