They say that beauty is only skin deep.  With plants, that’s true to a certain extent too.  Take orchids for example. 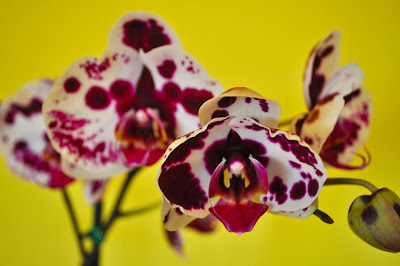 Without blossoms, an orchid is simply foliage.  Boring foliage at that! 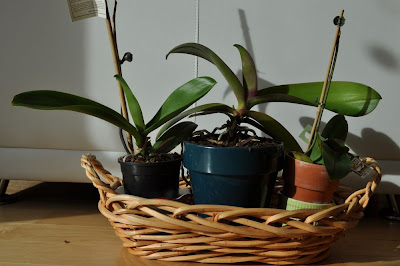 I’ve been looking at the biggest of these, for two years now, without blossoms.  I was good to this orchid.  I potted it up. I fed it blue colored food designed especially for orchids.  I talked to it.  But nada.  And not only was it on strike, but it cajoled the other two orchids I owned into joining forces with it.  They dropped their blossoms and never re-bloomed either.  My orchids were revolting!

I called my cousin in Ireland.  She always seems to have beautiful blossoming orchids, all the time.

“You’re being too good to them,” she told me.  “I never feed mine, and I only occasionally water them.  And I never, ever repot them.  Treat ’em mean and keep them keen.”

Wow!  Orchids needed to be treated just like men.  The more you feed and pamper them the lazier and thankless they become.  No more Mrs Nice Guy….

I presented my orchids with an untimatum.

“Here’s the deal you guys – I’m kicking you outta this lovely cozy environment, without any food and no more new pots until you blossom – even a flower spike will do.”  They were quite literally “in the dog house”.  Okay – sunroom – to be exact.

I sent them there in late september.  One of them suffered some sunburn until I repositioned it under the table.  I felt bad everytime I looked at them, but I stayed strong.

“Just one flower spike!”  I told them.  I dribbled a little water on them when they looked thirsty – orchids are great at looking thirsty and pepping up after a wee drink.  If their leaves look a little wrinkled, they need more water.

The sunburnt one lost its damaged leaves and started to look better.  The temperature at night dropped by the required 10 degrees ( I wasn’t sure if we were talking in Fahrenheit, so I went down in Celsius too, to be on the safe side!) as suggested on eHow’s page on “How to Make an Orchid Bloom”.

Everyday, I checked them.  Nothing happened.  I stopped checking them every day.  It was down to once a week, if even.  I upped the stakes and told them it was either blossom or die – I was running out of room in my house for foliage!

I think I must have scared them into it – at the end of November, just as the night time temperatures were kissing freezing point, I noticed not one but two spikes appearing on the first orchid.  I gave it a couple of days though.  This guy had fooled me before by pushing out grey green aerial roots that got me all excited, untill they turned downward and withered up. Now, what’s a gal supposed to do with that?

But no, this time it looks like the real thing.  Two upward spikes and a nice aerial root for comparison. 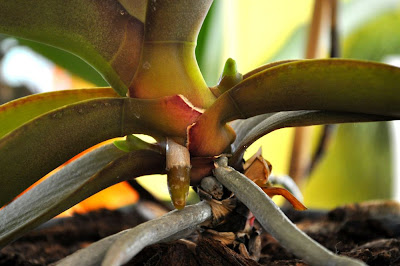 And to my great delight the second one followed suit with one spike. 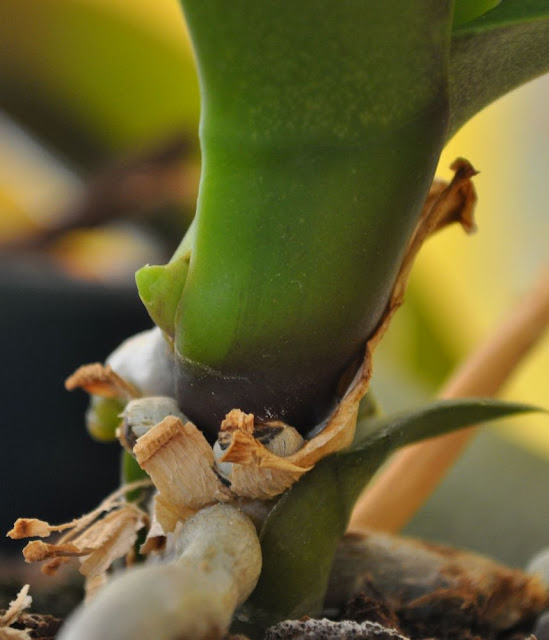 Orchid number three had a promising branch from the old spike, but disaster struck – I knocked the little branch off! 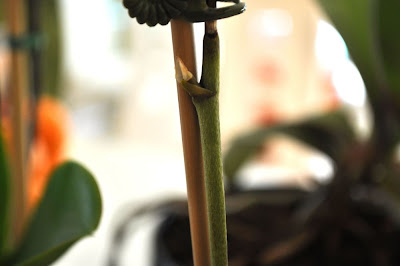 Still, it had kept up its end of the bargain, so I kept the three amigos together.  Today, they’ll get their first feed in over two months.  There is supposed to be some fancy-pants blossoming feed, but I’m just keeping it simple.  They haven’t finishe the food I already bought them, and it was expensive.  No point in slipping back into bad habits and spoiling them again.

If these aren’t flowering spikes, all three have been threatened with the compost heap!  If only we could threaten men like that…

As for foliage – this plant, that my neighbor  Laurie gave me back in July, is thriving.  The little new leaves are so cute, compared against the full-sized ones. 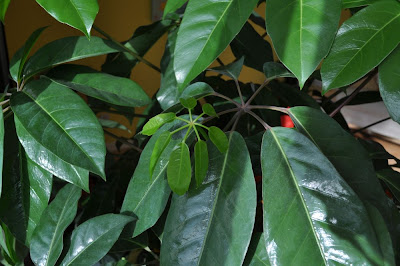 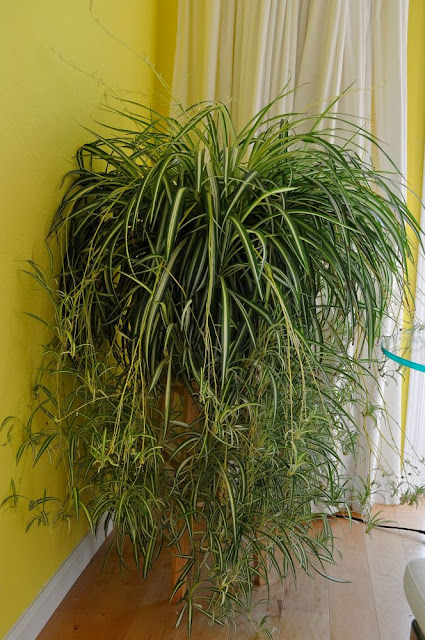 Beautiful red leaves on the poinsettia make a wonderful seasonal centerpiece on the little shelf beneath the glass table. 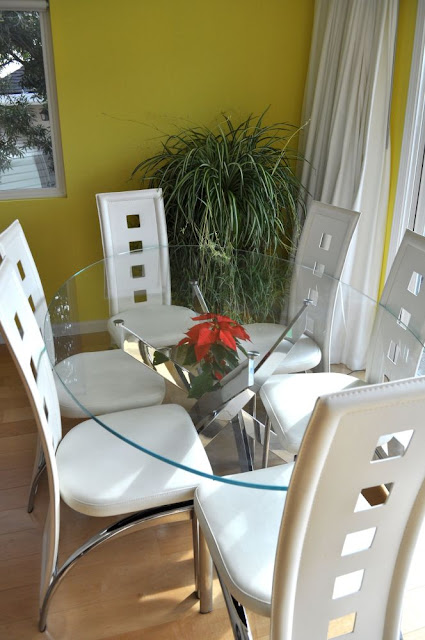 And my peace lily has blossomed. 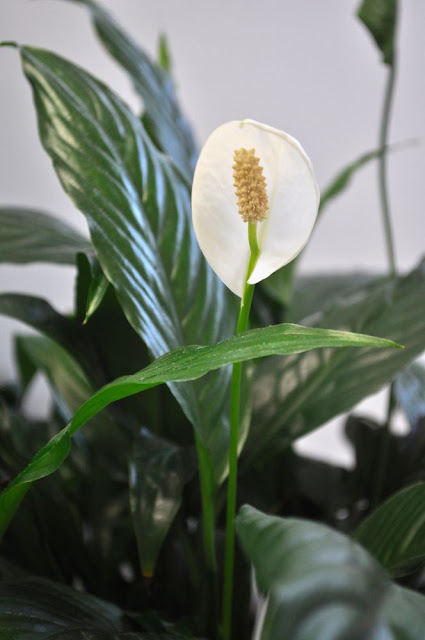 I’m leaving you with a puzzle this week.  I have this mystery plant I picked up in Orchard Supply Hardware last June.  When I bought it it had beautiful lilac, bell-shaped blossoms on flower stalks.  I lost the tag telling me what it is. 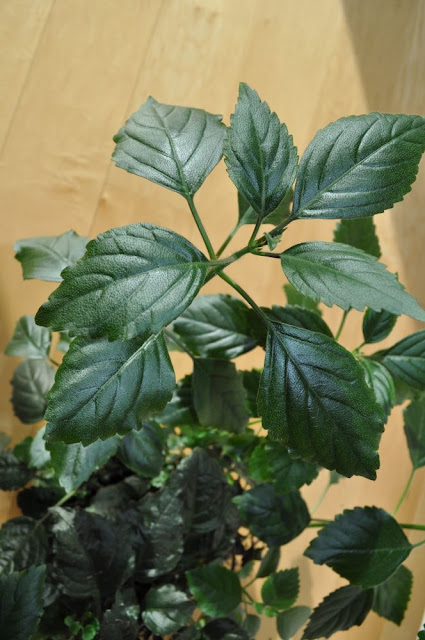 The underside of the leaf goes purple, as does the flower stalks. 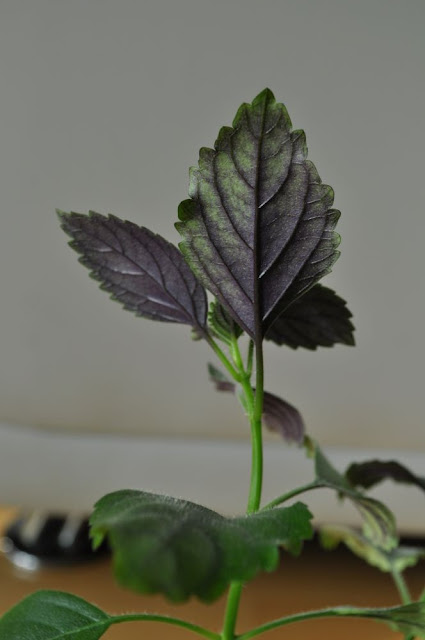 I’d also appreciate any tips on how to force it to bloom again….

(P.S. For the record – no husband has been hurt, starved or made to sleep in the sun-room in the making of this post!)

5 replies to What’s in the inside matters too.