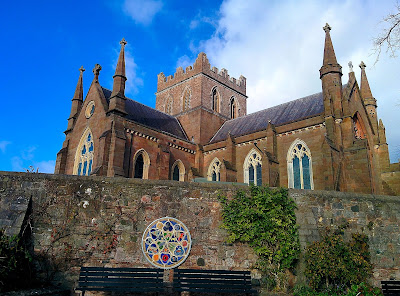 It started, as so many writerly things do, with Byddi. She stayed in Paris long enough to co-found a critiquing group and for me to get to know her a little. With her blue eyes and blond curls, Byddi is at least one part Christmas-tree fairy but with her ferocious energy, drive and loyalty, she’s two parts word-warrior queen. It was no surprise to hear that, shortly after having left Paris for Armagh, she was hustling together a flash-fiction festival that sounded like the best fun.

Two fellow Parisian writers and I decided to crash it.

‘We’ll come and support you,’ we said.

Byddi being Byddi, she declared the festival an international event and welcomed us herself, at the airport, late one Belfast night.

We drove into Armagh through the sort of blackness the City of Light has long forgotten. Having fielded perfectly sensible Parisian questions such as ‘how can people see without street lamps?’ Byddi got on with the business of narrating the night, sketching out with words the towns and orchards we couldn’t see. I quickly stopped peering into the darkness and instead listened until we reached our cosy lodgings at the Charlemont Arms Hotel.

Breakfast was big, Irish and – being shared by three writers – wordy. We somehow got onto the subject of female forebears who faced risky and multiple pregnancies. The lady waiting tables served up the best story, top trumping us as she cleared our plates: 22 children born to one woman.

This emerged as a pattern when we toured the city. It quickly became clear that there’s not a stone in Armagh that doesn’t have a tale to tell; people swap stories the way the English shake hands. I left the tourist information office not with leaflets but with tales of a sword too big to wield and a giant warrior. At the Hole in the Wall, greetings took the form of ‘What’s your story?’ and refreshments were served with a tale of unhappy love and a hanging. At Emain Macha, myths and legends were illustrated on a big screen and so enchantingly told that when I later stood on the mound, I was sure any archaeologist digging would find story on story on story, stratified.

I heard plenty of anecdotes where arrests and bombings unselfconsciously shared sentences with meals, marriages and markets days – a reminder that for many years, strife and struggle were the daily lot of many in Armagh, but it was hard not to feel optimistic as we explored the city. My fellow Parisians and I were the only ones in black. Everyone else seemed ready to put on the glam and get something going. As we walked through the Market Place Theatre & Arts Centre before closing, the receptionist put the Christmas tree lights back on for us and suggested a photo shoot. Every social interaction became a networking, sponsoring or social media opportunity. When my friend tried on a jacket that fitted like it was made to measure, a picture was taken and posted on the boutique’s Facebook page, and when the guide at Emain Macha heard our enthusiasm for myths and legends, she got out from behind the desk to share with us the excellent and beautifully illustrated Cúchulainn by Réamonn Ó Ciaráin. Wherever we went we got a small-town welcome so warm it was hard to see Armagh as a city, despite its two cathedrals and world-class museums.

It was at one of these museums – Armagh County Museum – that we enjoyed the highlight of our stay: a flash-fiction feast served up before a portrait of Seamus Heaney and his piercing eyes, painted by Colin Davidson. We feasted like gluttons on stories ranging in inspiration from the literary and celestial (A Clockwork Heart) to the local (Cás na dteifeach), and in setting from the domestic (Say’s Himself) to the parallel world of horror-erotica (Always and Forever). All pieces were read with finesse and generosity in a venue that made for a magical evening. It came to a close much too soon – which may explain why we were slow to go. I was most grateful to our kindly, informative hosts, who let us explore the museum’s treasures long after our time was up.

Next day: home to beautiful and indifferent Paris. I took time to reflect on all I’d brought back in head and heart, based on the writerly principle that if protagonists come out of a journey unchanged, they’ve not been anywhere. With such a wealth of happy memories and stories, it seemed only right to share this story by taking an uncustomary toe-dip into cyber-sea – to say a big thank you, Armagh, and à bientôt, j’espère.