I sat stock-still in the darkness of the Abbey Lane Theatre, my skin prickling with goosebumps, my heart bursting with sympathy for Bellina Prior (21) the woman otherwise known in Armagh as the Green Lady who had killed little Anne Slavin (4). It was a surprising reaction, but such was the impact of Armagh writer and actor Karl O Neill‘s play, Bellina and the Softening of The Stones, magically brought to life by wonderful actors Maggie Cronin and  Brenda Winter-Palmer.

This was the first of many moments where my emotions were pummeled during the course of the John O’Connor Writing School and Literary Arts Festival 2017.

The programme was ingenious – 5 concurring schools would run in the mornings (Friday through to Sunday) covering poetry, playwriting, songwriting, fiction and screenwriting. In the afternoon and evening, students, artists, tutors and members of the public could mingle as they attend the panel talks and live performances. The intimate settings such as the gracious Charlemont Arms Hotel, the Amma Centre, the Robinson Library, the Planetarium, Abbey Lane theatre (to mention but a few) brought me shoulder-to-shoulder with other writers and artists. Some were musicians I had only ever dreamed of seeing play live, never mind actually conversing with!

After Bellina and the Softening of the Stones that first evening, everyone gathered at the Charlemont. I had to pinch myself to check I wasn’t dreaming as I sat around a table with Maggie Cronin, Karl O Neil, Barry Devlin and Jim Lockhart from Horslips (The actual Horslips – OMG!)

Karl and I discovered a connection through family and friendship – my father and his sister had taught together. Karl patiently answered my questions about the play and how he’d come to research and write it – questions I’m sure he has answered a thousand times. Maggie had enjoyed the craic, I think, as we’d walked from the theatre to the Charlemont (I was volunteering at the event and had been ‘on the door.’) I had dared her to walk down Vicars Hill in her costume that night. Barry and Jim, I’m sure, were just being polite – probably wondering who the hell I was!

We chatted about writing, story, good things to watch on the telly… all an addition for my memory folder of golden moments.

The next morning, (Friday) I attended the registration in the Robinson Library. I sat feet from the original copy of  Gulliver’s Travels with Jonathan Swift’s notes handwritten in the margins. Karl O Neill arrived in and chose to sit beside me. Behind me sat the talented author Jo Baker, next to her husband Daragh Carville, a very successful screenwriter from Armagh. They greeted me warmly, epitomizing the ethos of this festival, inclusion, no borders, no boundaries – we were fellow Armachians, in this together.

After the Lord Mayor’s opening address, Lemn Sissey read a beautiful poem that brought tears to my eyes. I especially loved the following lines, that spoke to me of My Husband’s support of and faith in my writing.

If there was ever one
Who when you achieve
Was there before the dream
And even then believed;

From Invisible Kisses by Lemn Sissey
And then it was to school. I chose screenwriting, something I’ve always had an interest in but just didn’t know where to begin. Deirdre Cartmill, my teacher, showed me. Her enthusiasm for the art-form is boundless and she had our class enthralled and hanging on her every word. Yes, she told us it was a hard business. Yes, we needed a thick skin to survived the editing and rewriting process, yet nothing about her warnings put me off. She had the rare talent of making you feel everything was possible and that you deserved that everything too.
For the second time that morning, I choked back emotion as I listen to her tell us that writing was not a selfish pursuit  – she read a quote which basically said that if you were born to write you could either write or not write. If you didn’t write you hurt yourself, others, and the planet! It finished by telling us that our unique gifts nudged us closer to God and commanded us to “Give us what you’ve got.”
Those are words I’ll draw upon in the solitary place at my computer when I wonder what the hell I am doing here. Thank you, Deirdre.
That afternoon I attended a panel discussion on “What makes good theatre?” These people have spent a lifetime on their craft: Jo Egan, Jane Coyle, Rosemary Jenkinson and more Armachians, Conall Morrison and Paul Bosco McEneany. At the end, I had the chance to chat to Conall and Paul. I’d known both of their sisters at school – it’s a small city, Armagh, but with a far-reaching web of connections. Both men seemed genuinely pleased that I’d apprehended them, God Bless them. I’m sure they get a lot of this.
I said to Conall that I felt overwhelmed being such a newcomer to the scene, having had a life in science and teaching before writing. He told me that didn’t matter, that new people like me were most likely less jaded and brought our own freshness to the scene. Kind words, that I certainly soaked up.
Paul was heading my way and we walked from the Local and Irish Studies Library to Market Street together. As we passed the Cathedral, I told Paul about how it featured in my current project, in-between our exchanging the do-you-remember-such-and-such-person? and other reminiscences of Armagh.
Friday evening events were sold out. I was too tired and filled to the brim with inspiration to be too disappointed. I needed some quietude to mull over what Deidre had taught me that day.
Saturday morning dawned with bluebird skies and breath-clouds that hung before your face. 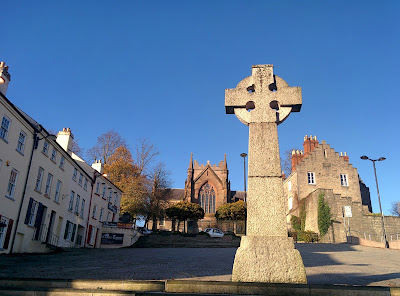 Market Street, where I lived when I was in single digits, looked splendid. I sat in class in the Amma Centre looking out over my old playground – now minus the bollards and black fire-pocked tarmac.
Our teacher was joined by Barry Devlin for the industry talk about the nitty-gritty of life as a screenwriter. Barry was as entertaining as he was informative, his self-depreciating humour unveiling a gentleman and a scholar.
When I was thirteen I discovered the Horslips. The first time I heard Dearg Doom my imagination burst into visions of stallions galloping through surf, of rebel warriors charging, of thunderclaps over mountain peaks, of hot blood pumping through hearts and of feet unable to stop dancing. I was bereft then when I discovered that the band had ‘retired’ in 1980, three years before I’d first heard of them (I was always a bit slow on the old music scene – where my friends had posters of Duran Duran, I had posters of elephants and tigers from David Attenborough documentaries!)

Horslips reformed in 2009 but by then I was living in America, though I did have their CD with me. So I, for one, was thrilled to hear that Horslips would be playing in The Charlemont Hotel that evening.

After class, there was another panel discussion “Lights, Camera, Action.” with Barry Devlin, Daragh Carville, Ronan Blaney, Jude Sharvin and the adorable Ursula Devine from Screen NI. In short, the message was thrilling – it’s a great time to be getting into screenwriting in this part of the world. I left feeling excited about the possibilities opening up in this region in film and drama production. Ursula couldn’t have been more encouraging when I had a chance to talk to her later in the Charlemont at the Celebration Night.
After that I needed to eat – I’d been too busy, too excited, too inspired to stop for lunch…
I found Brenda Winter-Palmer, her husband Richard and Libby Smyth in the Charlemont Hotel lounge. They invited me (wee me!) to join them and we spent the next two hours in animated discussion in what turned into a workshop on screenwriting ideas. Both actors made me promise to write a screenplay for them – a promise I fully intend to keep.
Later, I watched, enthralled, as Libby Smyth transformed on stage at the Abbey Lane Theatre to perform Both Sides an interlocking monologue along with Hannah Coyle, set in Paris and Nice, written by Jane Coyle.
The ultimate highlight of the festival for me was the John O’Connor Celebration Evening, because My Husband, My Sister, My Bro-In-Law and friends joined in the festivities.
We were treated to a plethora of amazing talent. Glenn Patterson read a piece about the Titanic sinking, using maritime distress signals that literally left My Husband speechless with emotion.
Gareth Dunlop‘s music inspired me so much, I had to actually whip out my phone and jot down some notes and ideas as I sat and listened to him. Lisa Lambe and Fiachna Ó Braonáin from Hothouse Flowers joined Horslips on stage and soon had the hall rocking. But it was when Horslips played the opening bars of their best-known song, Dearg Doom, the place went ape-shit and we all lost our heads (and hearts) to the music in a freestyle ceili that had the stage lights bouncing. We danced, stamped, punched the air, clapped and were transported to another time, another world. Barry Devlin ceased to be my screenwriting tutor, Jim Lockheart, no longer that guy beside me in the coffee line (earlier that morning.) They and the rest of Horslips had become Time Lords and Dearg Doom their Tardis.
Later in the bar of the Charlemont, someone produced a guitar and a sing-song erupted. I could hardly breathe with excitement when Gareth Dunlop appeared and joined in. Then Lisa and Fiachna had us all singing with them.

It was spine-tingling good and for me soul-filling. I’d missed an ould sing-along session in the pub during all those years I’d lived abroad. No-one does this like the Irish, and here we were soaking up the talent of these amazing artists as if we were all on the same level – No borders, no boundaries.
As a venue the Charlemont Hotel was outstanding. The staff could not do enough for us. We’d kept them up half the night but still, they looked after us with good humour and a cheerful smile. I’ll be back to do a separate blog on this amazing place…
I made it on time (9.30am) to class the next day – an accomplishment in itself! And the literary lunch was a final treat in what had been an excellent long weekend. Author Orla McAlinden and I swapped signed copies of our books. I can’t wait to read the Accidental Wife.
We were served local cheese, cider and can-you-believe-it – locally grown Armagh grapes! 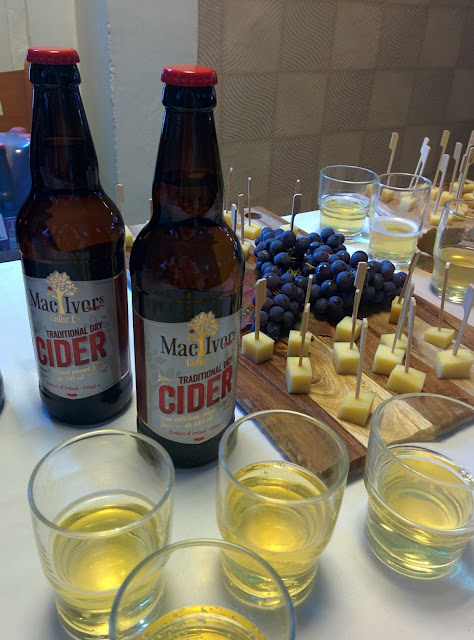 I’m truly amazed at the vision, passion and sheer dedication that festival director Cathy McCullough poured into this event. It showcased the great talent that Armagh has to offer and that Armagh wants to welcome. It was a weekend that celebrated words, that celebrated the people who are guardians of those words and celebrated the connections between people across borders and across boundaries –  connections interweaving like gossamer silk cocoons glistening soft and supple in the warmth of friendship and camaraderie, and which even in the cold frost of the solitariness of writing, allures us with their brittle sparkle.

Thank you, Cathy, for this amazing experience.