Armagh continues to surprise and delight me with its vast range of culture and food experiences, and simply put – fun things to do. There’s something really pleasurable about being a tourist in my own hometown. I’m incredibly proud of our wee city and never more so than when I’m learning about its history. Armagh really is a fascinating place and for a spot that is not on the coast, has no major port (the Callan being a little on the small side) it always amazes me how many people of note have hung their hats here, however temporarily, in days gone by. For example, Saint Patrick, Jonathon Swift (author of Gulliver’s travels) to mention a couple at this point.

Nowadays, Armagh is an up and coming culinary player in the Food Heartland scene. So when I heard of the Brunch to Lunch Tour, I bought tickets straight away! The idea is you begin with Brunch then do a walking tour that ends with Lunch. Here’s the menu:- 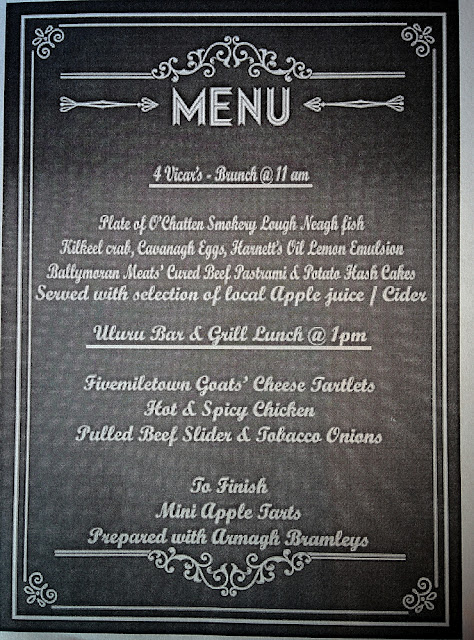 The tour, led by the lovely Donna Fox, began in Market Street – a place close to my own heart since I lived here as a child. What was particularly cool was that Donna was able to tell us about modern art installations as well as telling stories from way back when, weaving a delicious tapestry from the past to the present.

The tour was full but capped at 16 people- a nice size of group.  I asked if anyone was from further afield than County Armagh and was surprised to see that only two were. I loved that we natives are getting into being tourists at home. What was particularly fun with this group was the sharing of anecdotes usually stories handed down through families. Donna expertly managed these exchanges and contributed, filling in the gaps in our collective local knowledge. It was fantastic, not to mention the lovely new friends we met along the way. 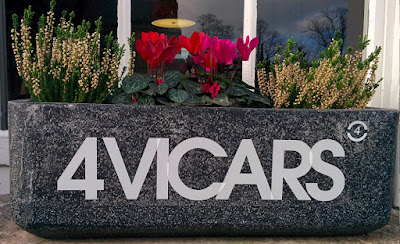 Brunch was at 4 Vicars, restaurant, set up as a taster menu. It did not disappoint. Mind you, this place is consistently superb and is a place we Armachians should be incredibly proud of. The chef, Gareth Reid and all the chefs to date are from a “cluster of chefs” from the Food Heartland Group founded by Sean Farnan, the chef at the Moody Boar – the restaurant that will be on the next  tour.

After brunch the tour continued…. Too many fun facts to list here. I’d rather let folk have the chance to hear Donna actually deliver the info herself but here’s my 6 of the best:

1) Outside the Market Place Theatre is the Star Stone. 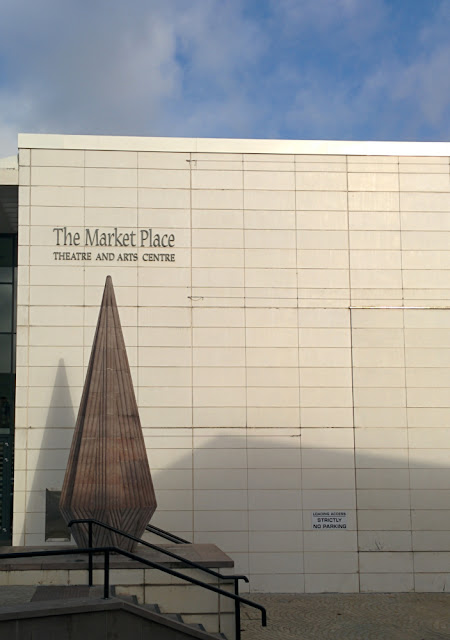 It was sculpted by Richard Perry and “The inspiration for Star Stone came from Armagh’s long association with the night sky and the way the Cathedrals seemingly reach for the sky from the hills on which the City was built. ” It also ties in with the Observatory and Planetarium. With its shadow on the wall you can see the idea of the twin spires. It’s made from Armagh marble – see – I didn’t even know we had a marble!

2) In the Church of Ireland Cathedral Garden there is sculpture of Brian Boru’s head by Rory Breslin. 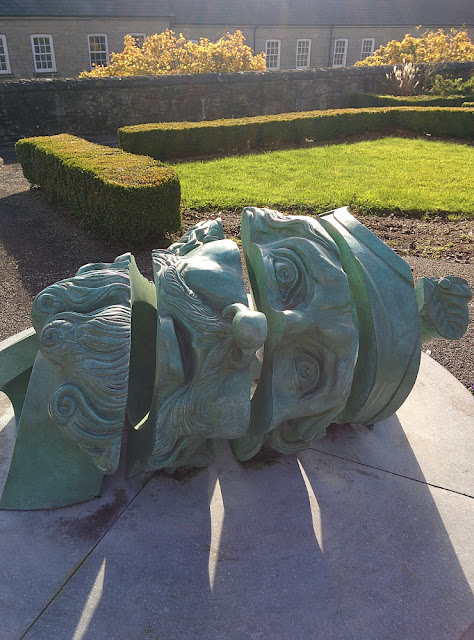 In 1006 Brian Boru visited Armagh and was so taken with the place that he left 20 ounces of gold to be buried here. He was slain in 1014 after the battle of Clontarf…the funeral cortege to Armagh took 3 days! 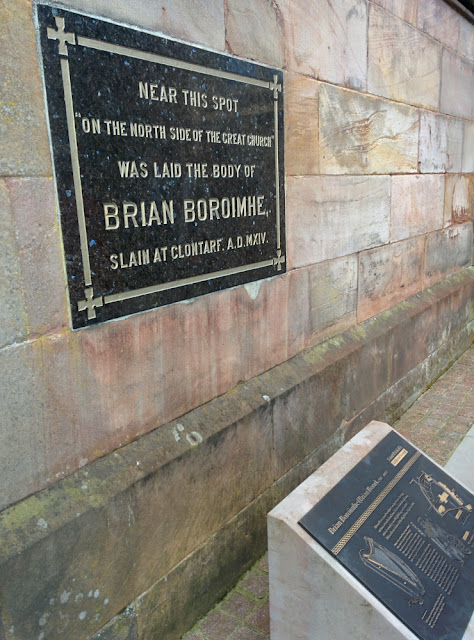 3) The street alongside the cathedral is called Castle Street. Of course, I already knew that, but what I didn’t know was that the rebuilding of Castle Street actually won prizes. And rightly so – it looks fabulous and is just as I remember it from my childhood (minus the big scary dog that lived there! That’s another story!)

In Donna’ words, “the houses were built from the stones of the demolished dwellings that had previously been here. They were restored by Hearth Housing set up by the National Trust and the Ulster Architectural Heritage Society to restore historic buildings. This row won a Europa Nostra Diploma of merit in 1995 and dozens of international housing experts came to Armagh with Professor Paddy Gray (native of Armagh) to see it.”

5) I’m gonna cheat by rolling two factoids into one section – James II stayed in the building at the top of Abbey Street on his way down to the Battle of the Boyne. His adversary, William III (of Orange), introduced gin to these parts from 1688 onwards and brought his chief cider maker Paul le Harper here to make cider for the troops before going into battle. Cider might have been already produced here but this certainly would have promoted the manufacture of cider locally, something William would have been pleased about since drinking wine reeked too much of papist practises! Apparently it’s where the saying to have “Dutch courage” comes from.

6)  These mural/sculptures by Eleanor Wheeler on the steps of Market Street tell the story of the produce from farm to the market. 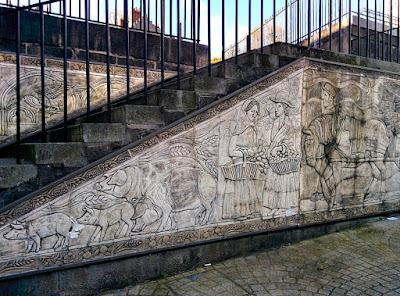 This was a snippet of what we discovered on our tour.

Donna had us spell-bound as she told us stories of the past, such that we hardly noticed the walk as we wound down from the top of the hill to the Mall then back up to finish at Uluru originally opened by an Australian Chef Dean Coppard who married a local girl. When the restaurant changed hands they kept the name. The head chef is now Mark Mc Gonigle who is also a Food Heartland Chef.

We’d been incredibly lucky with the weather but were still happy to get sitting down to a warm cuppa, some cider (Cheers King Billy!) and more lovely grub.

The next Walking Food Tour is happening on Sunday, 3 December 2017.

Beginning at the award-winning Moody Boar and finishing up at the Friary Restaurant in the Armagh City Hotel, it promises to be full of fun and yummy food. Both chefs, John Whyte (Friary Restaurant)  and Sean Farnan (Moody Boar) are Food Heartland chefs. 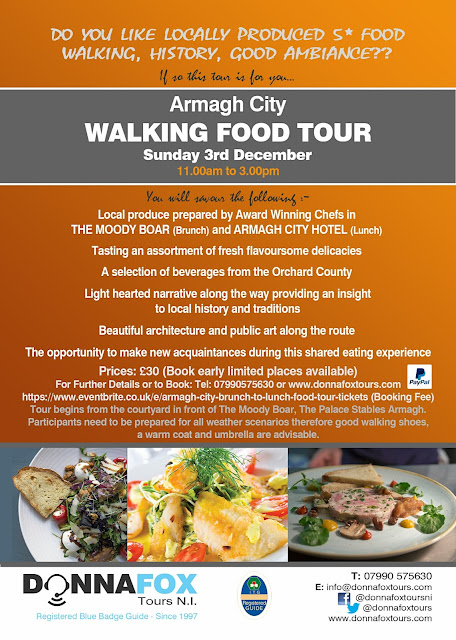 Hopefully these tours will become a regular feature in Armagh. Donna tells me that each tour will take different routes with Market Street being the only overlap. It will be a slightly longer walk – giving us more time to drum up an appetite!

For more information see Donna’s Facebook Page – Donna Fox Tours – and for tickets for Sunday you can book here. Donna can also can be contacted for Bespoke Tours for groups, not necessarily with food included but walking tours of the history of Armagh which includes the Public Art Trail and contemporary facts along the way. Donna has a  qualified with a Blue Badge level 4 on the Tour Guiding course which covers a large amount of Irish history. She very humbly admits that she is not a historian, having not studied history formally but her enthusiasm and gift for story telling brings the past alive and I can vouch for the fact that this gal knows her stuff. She is both informative and incredibly interesting, not to mention a stickler for getting the facts right (as I discovered when I asked her help in fact checking this post!) 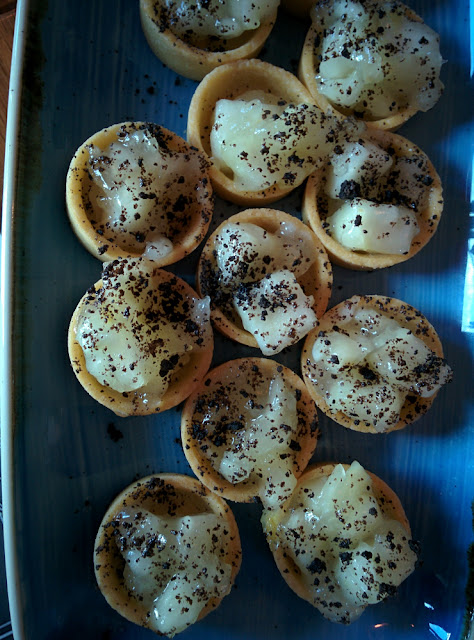 We had a great time and will definitely do another tour with Donna. In the meantime, my mouth is watering remembering how these naughty but nice little apple pies tasted… Apple pies, cider, stories galore… don’t I just love living in the Orchard County again…