Brussels is a relaxing 90-minute train ride from Paris. We bought our tickets through Thalys and left Paris Gard du Nord at 10.25am arriving into Brussels Midi at 11.47am. From here, we hooked into the Metro and made it to our hotel just after noon, where we met with our Californian friends who were travelling in Europe. We stayed in the Mas Residence and were delighted to find that our hotel “room” was, in fact, a mini-suite complete with living room area, kitchenette, giant bed and air-conditioning. Not only was the hotel room nearly as big as our Paris apartment, it was much quieter, overlooking a grassy back yard.

We began our explorations of Brussels at the Grand Place and it was pretty grand! 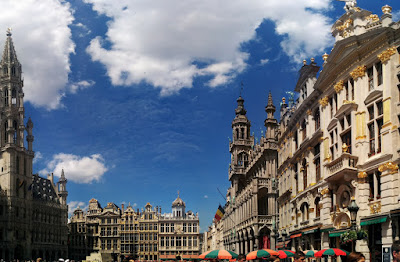 I was expecting Brussels to be very similar to Paris and pleasantly surprised by the fact that it differed. For a start, the people speak back in French, even when you are stumbling along they seem happy to decipher what you are attempting to say.

There are lot of modern buildings throughout the city. The area with beautiful old buildings feels quite small, but the buildings are very ornate, with lots of gold. 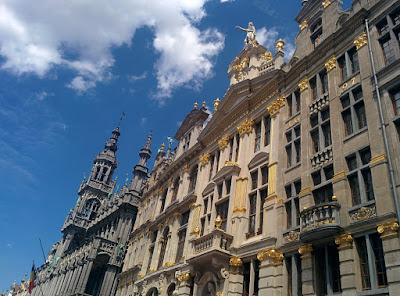 I love this guy’s moustache. I wasn’t sure what his cart was all about, but the Belgians love this wee statue – the Manneken Pis – a statue of a little boy peeing into a basin. 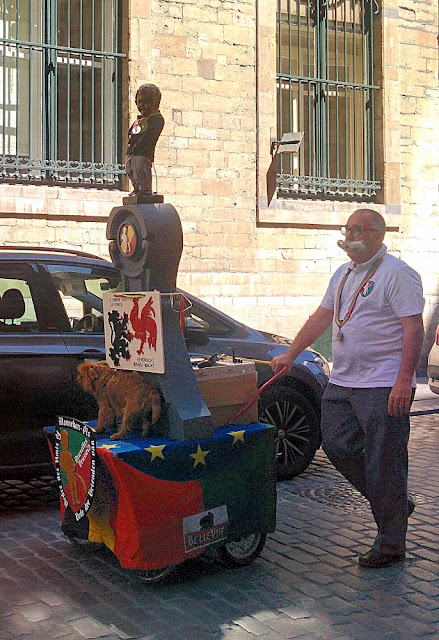 There were chocolate versions of the statue – though I was a little put off eating the waffles he seemed to be peeing upon! 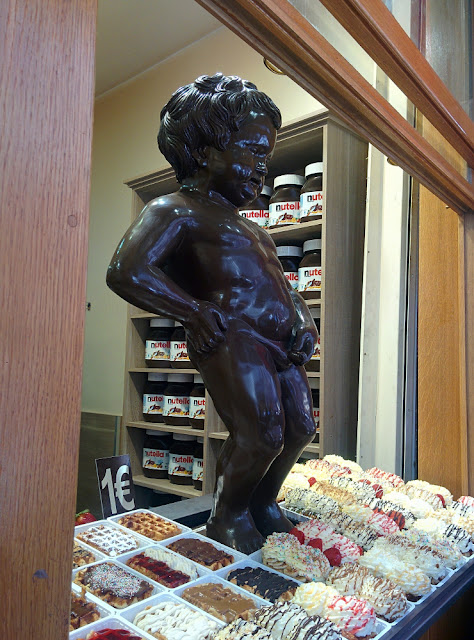 Some shops had multicolored versions of him. 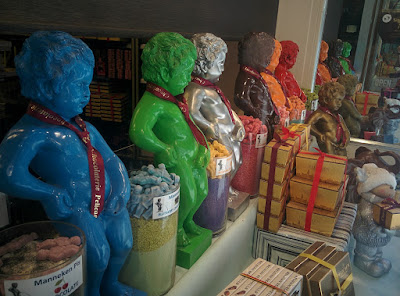 We went on a mission to find the original statue. When we found him, the street was full of tourists taking pictures of him. He was tiny compared to what we’d been expecting and he was dressed up! Apparently they have loads of little outfits for him and dress him up all the time. I found the whole thing charming, though bizarre! 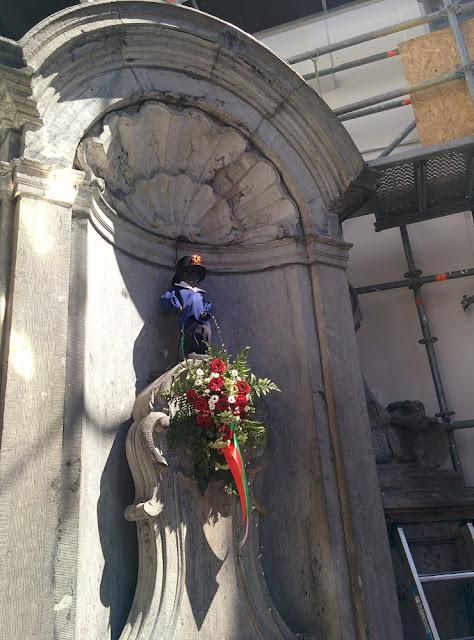 Belgium is famous for its chocolate and its beer. There are plenty of places to sample both in Brussels. 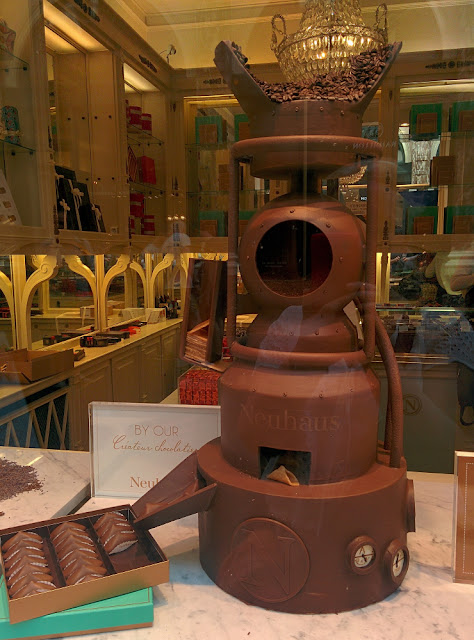 Delirium Cafe has over 2000 types of beers – it even has a chocolate flavored beer. 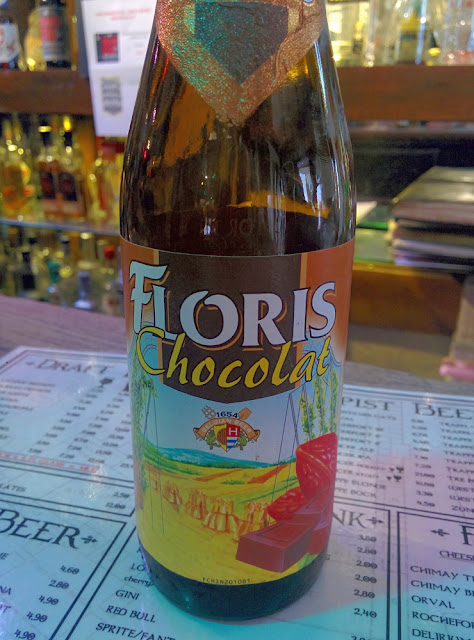 I especially love the cherry flavored beer, pictured here beside the chocolate – It’s like a beer Black Forest Gateau! This picture makes my mouth water… 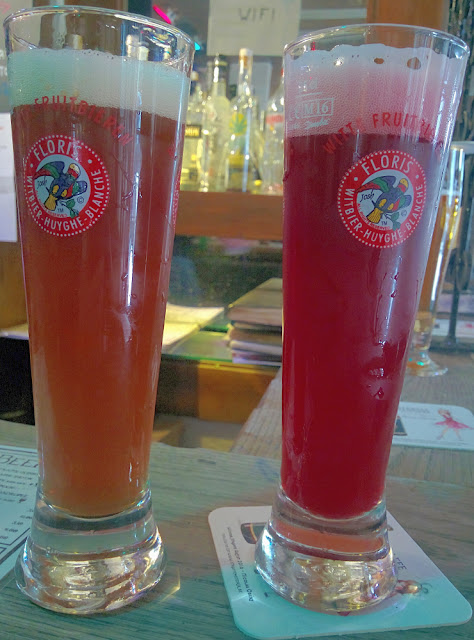 Delirium Cafe is up a little side street. You know you’re close when you see this cafe with the tree growing through the terrace! 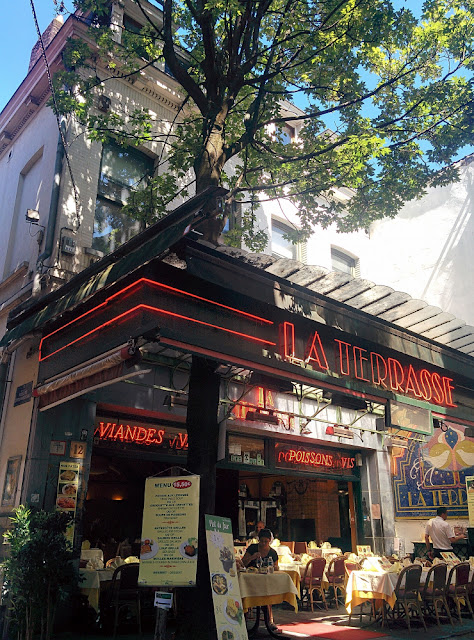 A very strange thing (apart from the Manekin Pis) that we came across was the fact that you cannot get free water in Brussels in a cafe, bar or restaurant. No such thing as ordering tap water or a carafe de l’eau. All water must be bought and paid for – which I wouldn’t mind if you got a big bottle. I was shocked at the tiny wee bottle of Perrier I got. The glass was mini too but have a look at the standard-sized teaspoon beside it for comparison. 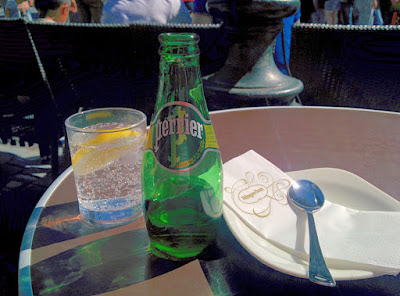 So stock up on your own water because Brussels is a city where you will walk the legs of yourself looking at all the amazing buildings. 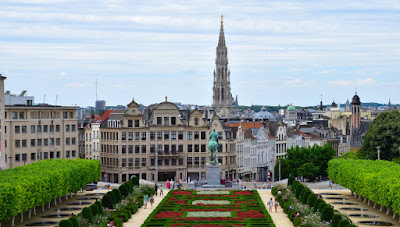 We started our full day there with brunch at the Wild Geese not realising it was an Irish Bar because neither its name nor its decor was particularly Irish – but the most important thing was – the breakfast! Full Irish with black pudding too. Highly recommended… 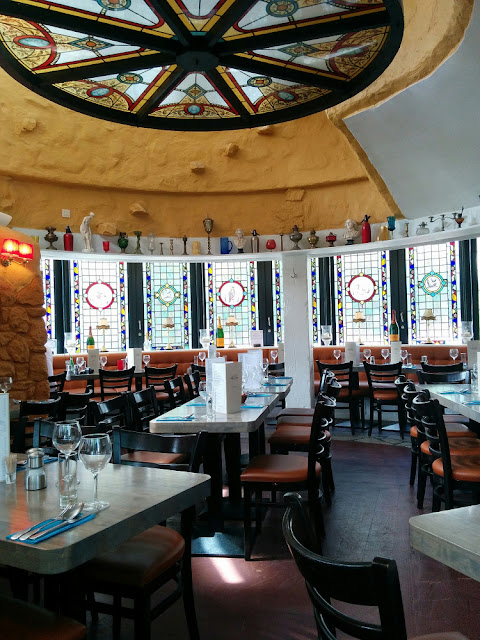 After Brunch, we got down to the serious business of sight-seeing and there are tonnes of sights to see in Brussels – massive churches…

…With amazing interiors. Each statue is holding something different – I wish I knew what it represented. 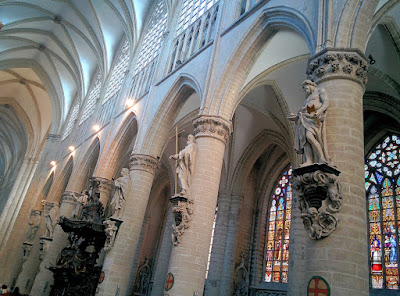 You can see cutesy wee churches… 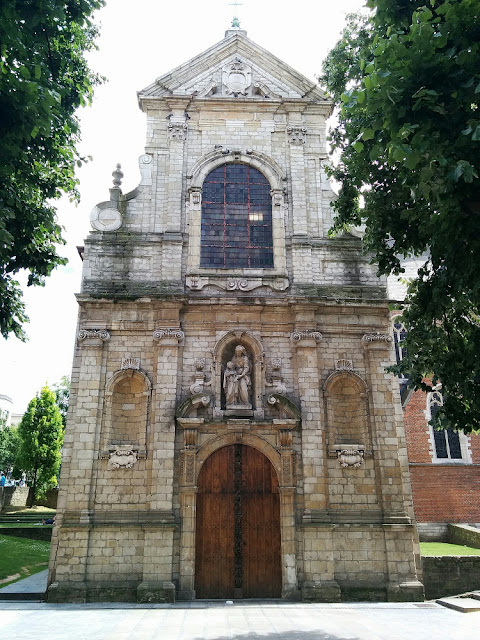 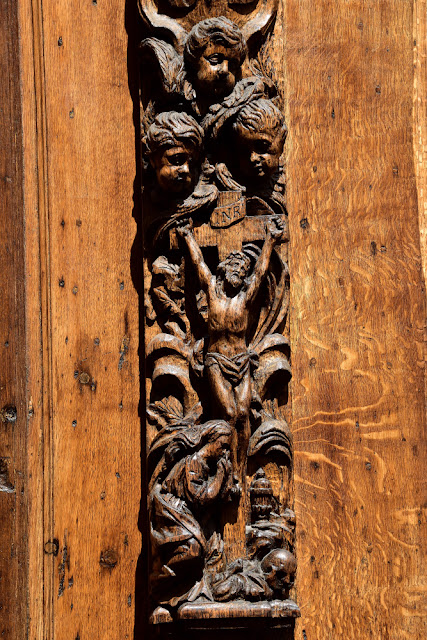 The Musical Instrument Museum had sheet music on it’s exterior along with gorgeous metal work. 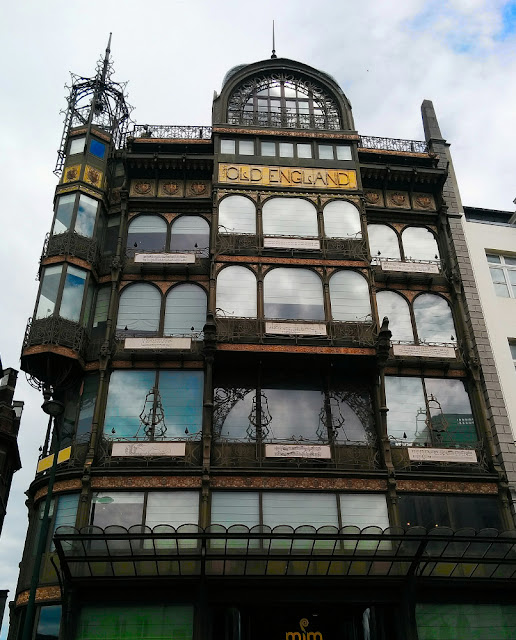 And across the street you could sit and listen to nice music for free. 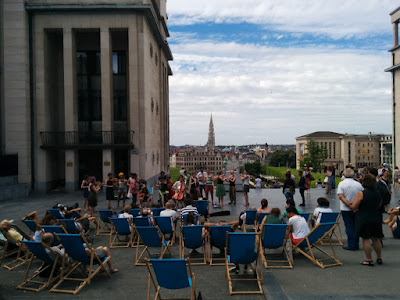 We took a wander around what we think was the European Parliament – there were plenty of flags and so I presumed we were in the right place. 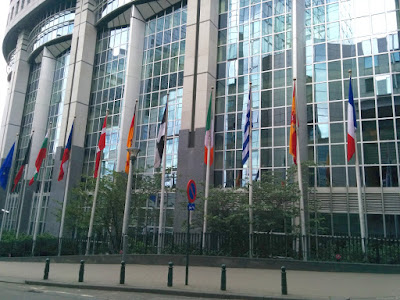 They even had a chunk of the Berlin Wall. 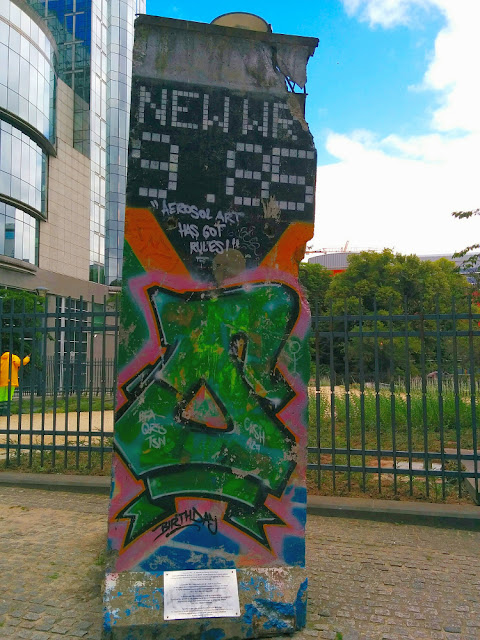 We walked all day and even managed to have a quick look at “the city beneath the city” the Coudenberg where there was a museum and archaeological site on medieval palace foundations underneath/beside the site of the Royal Palace. 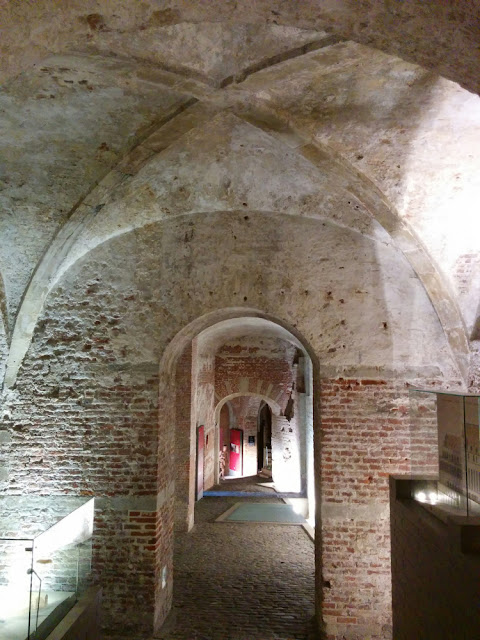 As day gave way to evening, we were treated to a beautiful sunset at the quais near St Catherine’s Square. 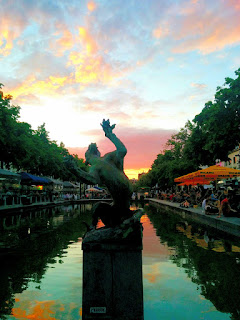 We had dinner in The Rugbyman1 – a great lobster place overlooking the quais. 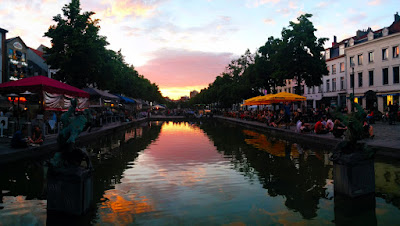 After dinner we explored the alleyways and found quaint little bars such as this one down “Diagon Alley” – our nickname for obvious reasons! 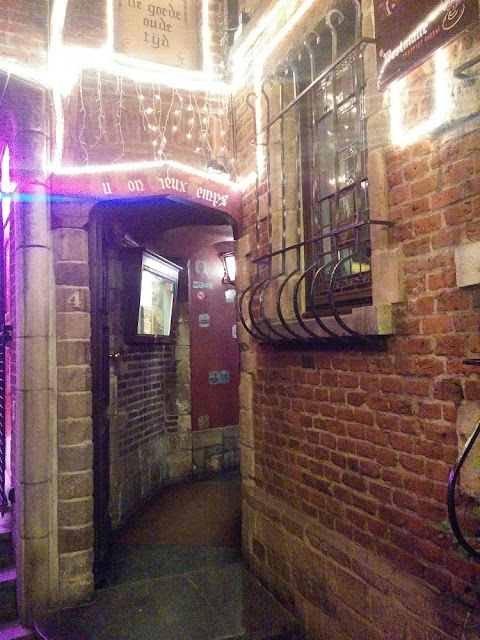 The full moon came out and vied with the street lights for our our attention! 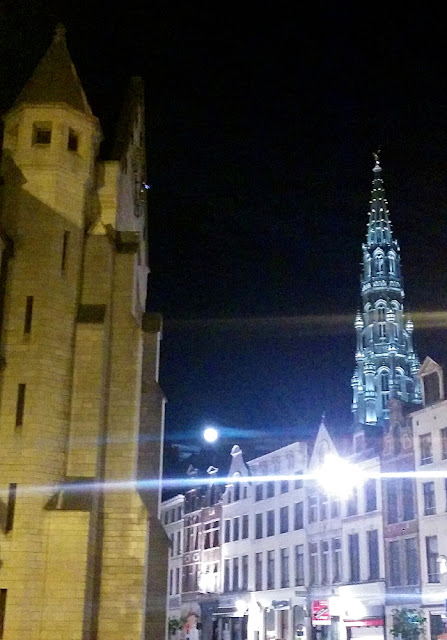 We had a great weekend with our friends exploring Brussels, drinking beer, and eating chocolate and waffles! It’s a top spot for a relaxing weekend.

2 replies to A Weekend in Brussels