There are certain aspects of life in France that are very much a mystery to us – such as rail travel! This we discovered when we agreed to meet our friends for a few days in Chamonix. 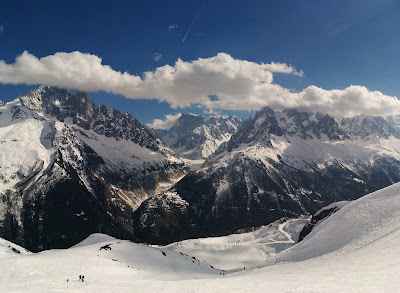 However, when we first tried to book the trip online, we could only book the outbound trip as the homeward-bound trip was still more than three months away. We’d be carrying our skis and all our gear. Counting the metro trip to Gare de Lyon, we’d have to change trains three times, but rail travel still appealed more to us than flying since we still have to lug the gear on the metro to the airport and then switch to a bus to transfer from Geneva to Chamonix anyways. If you consider the fact that you need to be at the airport two hours ahead of time for any flight, then door to door, there wasn’t much difference … or so we told ourselves.

Plus, we’d be able to see the French country side…

So we signed up for a loyalty card with SNCF, (the French rail company providing the trip.) We ticked every box to ensure we would receive an online ticket.Booked a ticket from Paris to Chamonix and tried three different credit cards (all rejected) and ended up paying with our French Bank account debit card only to receive a message that our tickets would be posted out to us! (The postal system is also a mystery to us!)

We wanted to stay in the same apartment complex our friends were staying in and were happy to find availability, less happy to discover we had to pay extra for bed linen and towels – seriously? French Alps hospitality at its best!

Anyways, we waited for four days to book the return journey but that morning discovered, to our dismay and disbelief, that all the return journey tickets were sold out already! What was going on? How could they possibly be sold out? Why is everything so damn confusing and never straightforward in France?

Over the next week we priced flights (too much hassle and expense what with checked baggage rules and prices) and other train routes. In the end, we figured out the problem – Gare de Lyon was closing for track maintenance, so we booked a TVG from Geneva to Gare de L’Est which was pretty much the same as Gare de Lyon for us in that we’d just take a metro home.

However – how to get from Chamonix to Geneva train station? The train was out of the question, taking too long with too many fiddly connections. But there was an Easybus going straight to Geneva airport, and from the airport the public rail (like the Metro equivalent) went directly to the Geneva train station where we could just get the TGV. All sorted!

Again, I tried to opt-in for online tickets – all the indicators showed I’d accomplished that request until the very final page that congratulated me on my purchase and my tickets would be posted out to us!

However, the day of departure dawned sunny and beautiful. The luggage was heavy, the skis awkward, but not impossible, and we pulled together as a good team, which made us feel like we were accomplishing something (though not anything very important, I have to add.)

The TVG, once we left Paris, was fast! Very fast. We clocked 190 miles an hour using the GPS test app on our phones. Our seats were upstairs and the speed and smoothness of the travel gave us a bit of a dizzy sensation but not unpleasant.

And the landscape was gorgeous! Rolling green fields (“Well how do you do Young Wille McBride” lodged as an ear worm in my head) sped past the window, dotted with cute country villages, every one with a beautiful church at its center. 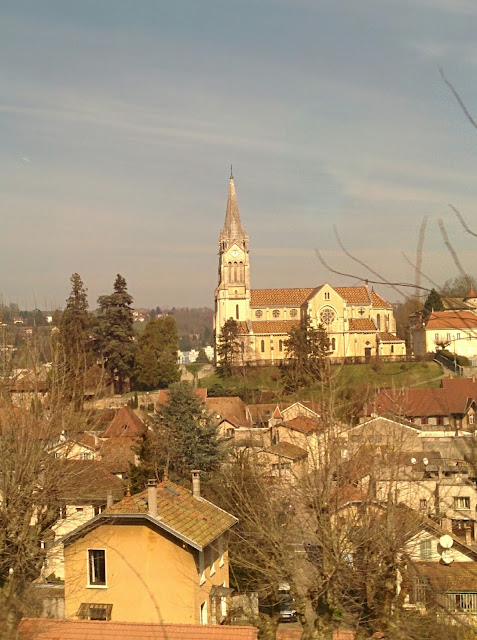 Sometimes there were magnificent bridges and quaint railway stations but taking picture was hard at that speed! 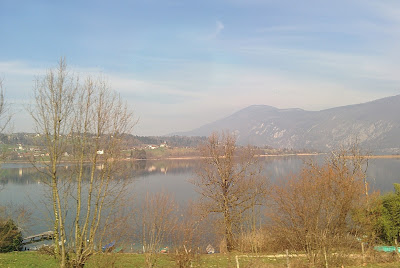 I did manage to get one of a lake as it flashed by.

The Alps rise up out of the French countryside in a wall of rock, with very little in the way of foothills or transition. Its just bang – you’re in the Alps! 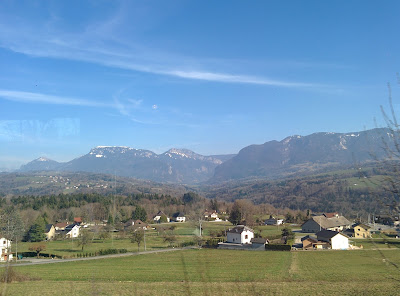 The views became more and more spectacular as we climbed into the mountains. 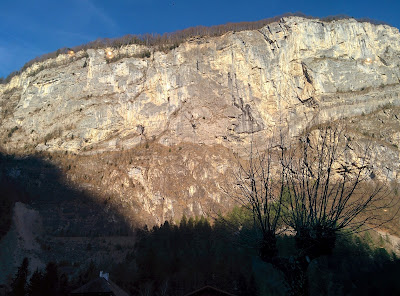 I got very excited at spotting the first of the snow. 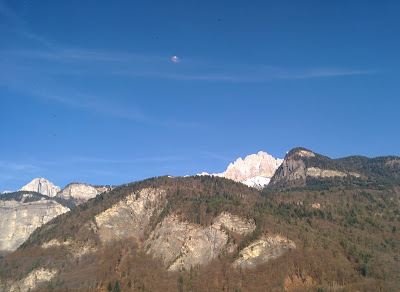 We had to change trains twice more, once at Annecy and then at St Germain de Bain. Each time the train got smaller and smaller until the train from St Germain de Bain to Chamonix was just two carriages long and stopped at every hold in the hedge – quite literally! This is one of the stops! 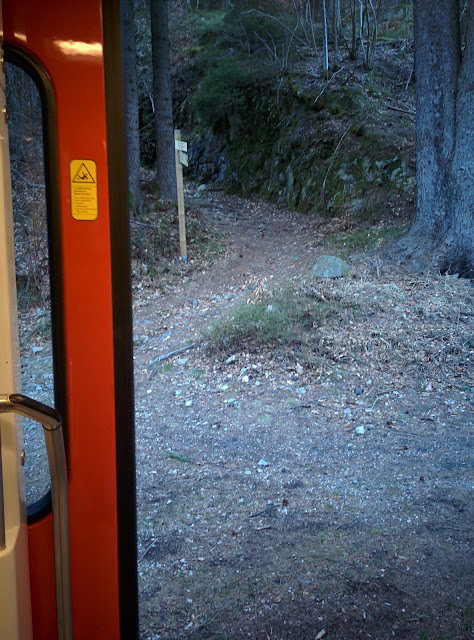 It was great to be met at Chamonix by our friends, not least because we had to go collect the keys and the bed linen for the apartment from an office on the other side of town from the apartment. Too happy to be there to be that angry with the lodging company, we got down to the serious business of having a great time with our friends!

The apartment was small but adequate with a spectacular view. 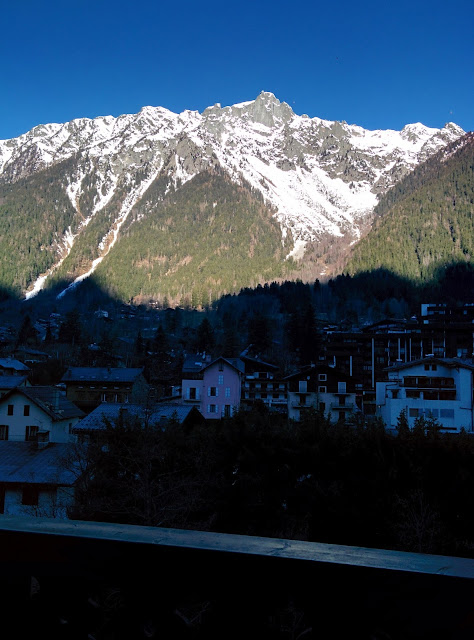 The skiing was fabulous. The area has so much to offer and not just for skiers. These para-gliders where having a ball…though it must be the loneliest thing in the world waiting for that updraft! 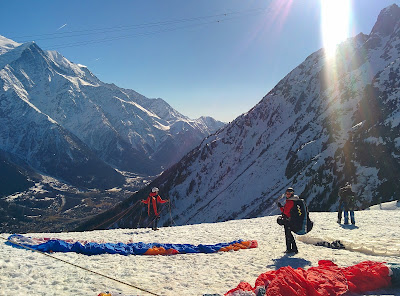 On the third day the weather closed in and we didn’t feel like skiing it (oh, how times have changed!) and instead we decided to take the train to the Glace de Mer – the glacier we’d been looking at on the opposite side of the valley for the past couple of days.

There was a nice restaurant and the view was spectacular even if closed in with mist. The mist thinned for a moment and gave us more of a look into the glaciated valley. 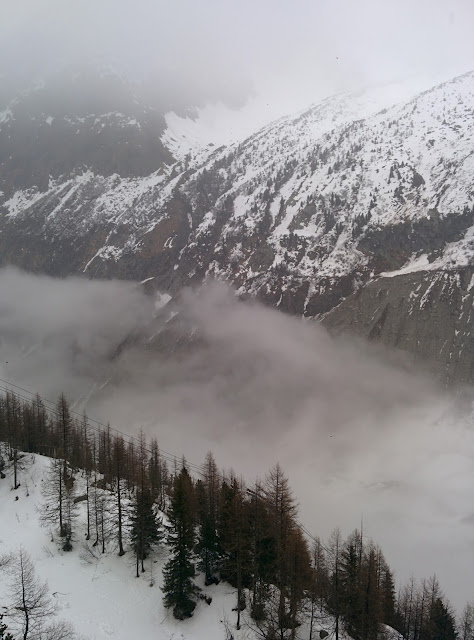 There is a gondola and steps (included in the price of the train ticket) that leads to an ice cave. Cold but beautiful! 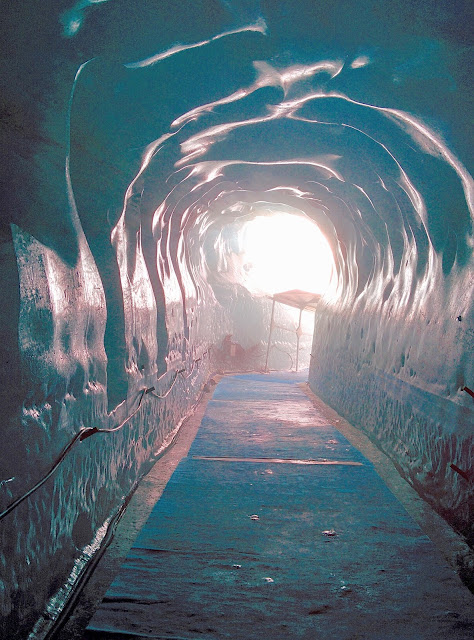 When we came out we even were lucky enough to catch a glimpse of the glacier itself. 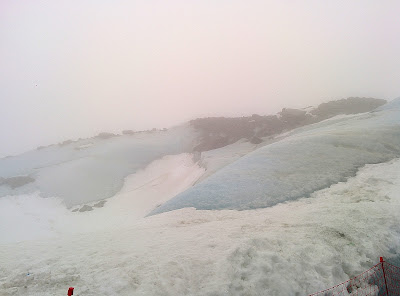 These are the steps we had top climb to return to the top. And there’s me thinking we’d have a relaxing day! 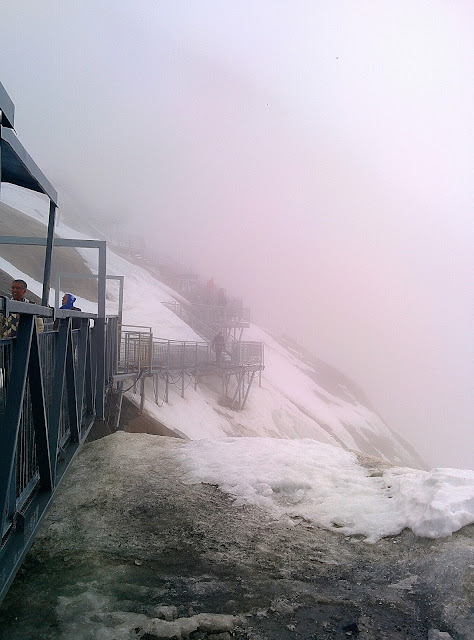 The next day we headed for home. The convoluted trip back via the airport bus to Geneva went smoothly, though I have to say the woman driving the bus was the grumpiest person I’ve ever met! She was English and refused to speak any French to her customers! I tried asking her a question but gave up when she snarled at me too. Perhaps she was a rugby fan! (She did look like she was a rugby payer.) And so since Ireland had just beaten the English at rugby, I forgave her! 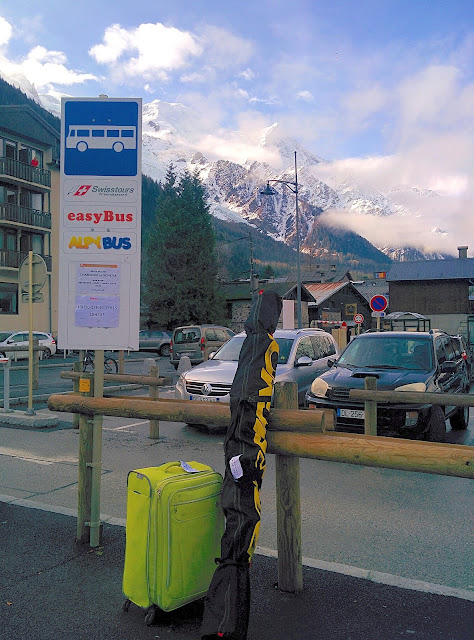 Despite the crazy train journeys, the weird apartment and the grumpy driver, Chamonix was a wonderful break, not least because we got to spend some quality time with good friends whom we hope have now caught the ski bug and will return for more.

P.S. 7 years ago today I posted about skiing in California – Heavenly is a place on Earth!
and then the following year almost to the day – Stopping by woods on a snowy evening

1 reply to A Quick Trip to Chamonix