From the moment I heard there were catacombs in Paris, I was dying to visit them. So I headed down there with a friend who was visiting us for the week. 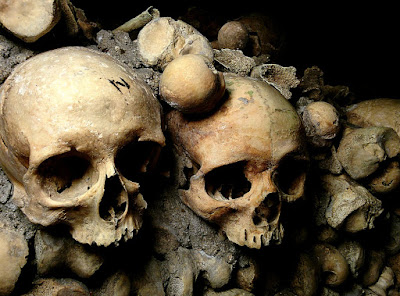 Please note – this is not a selfie! I think one of these guys used to be Harry Potter.

The Left Bank of Paris is built above huge limestone deposits. Having once been a warm, shallow sea there were amazing fossils in the rock, such as this giant sea snail. 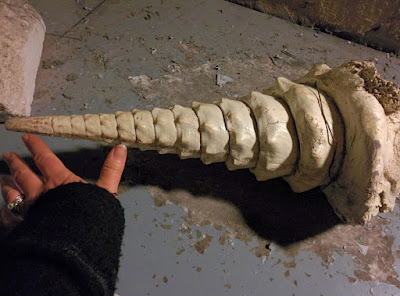 These limestone deposits provided the creamy-colored stone that build the city and resulted in a huge maze of underground quarries.

1) Areas of the quarries began to cave in where water had continued to erode the roofs of the subterranean chambers upwards so that they eventually became too thin to support the weight of the buildings above. It must have been terrifying for people to witness whole houses being swallowed up by the ground.

This initiated the inspection Générale des Carrières (Inspection of Mines)  to survey these tunnels.

The picture below shows the date an inspection took place and the initials of the engineer who surveyed it. (Or at least that’s what I gleaned from the audio tape which was well worth the extra 5 Euros.) It amazes me that in 1781 they had the tools to carve out these caverns, and then survey and fortify them. 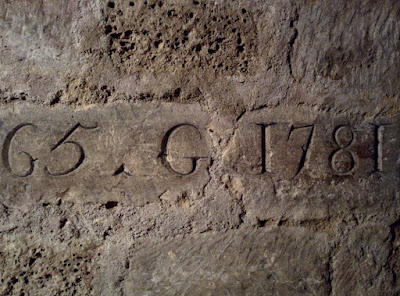 I was a bit concerned when I saw this crack in the wall, but the audio guide informed me that it was an intentional structure used as an air vent. 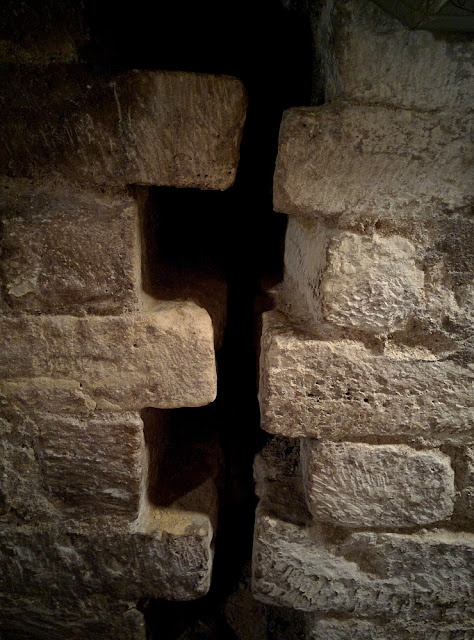 The ceiling had this black line painted on it to provide a guide, so early visitors wouldn’t get lost.  In 1793, a man went missing in the catacombs and his body wasn’t found for 11 years! I’m not sure if they painted the line before or after that, but either way, I was dead certain I wouldn’t be counting on it. 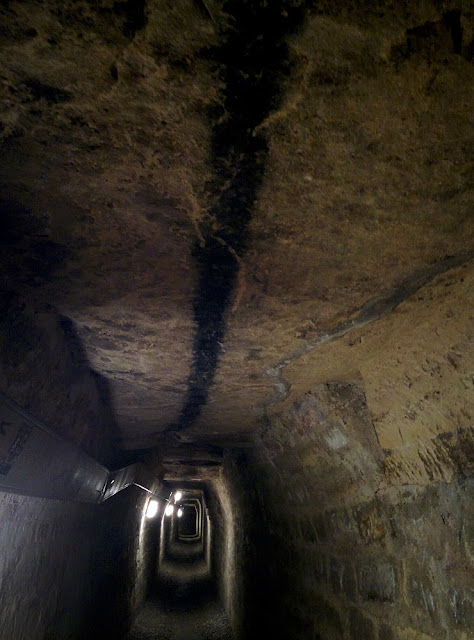 Once thing was for sure, we’d picked an excellent time to visit the catacombs – Wednesday evening around 5ish. We had the place to ourselves and it was as quiet as the grave! 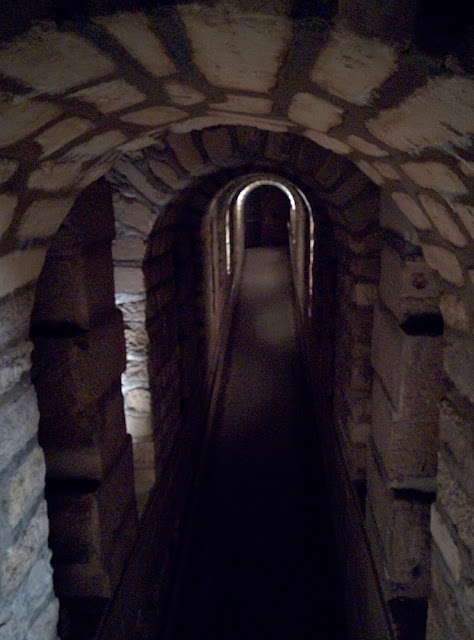 2) The second thing happening around this time was the lack of room in the city center cemeteries. No bones about it, the bodies had to be moved. The Catacombs provided the ideal final resting place for the dead of Paris.

As the audio tape talked me through this my ear pricked up at the mention of Les Innocents, one of the first areas to be cleared. I know that spot. I live really near there and walk past it every day. Because of this, I felt connected to the story of the Catacombs. Was this the beginnings of me taking root in Paris? And what a place to begin that process. Yes, roots need to be buried, but this was kind of deep!

Above the door to the ossuary hung this sign. 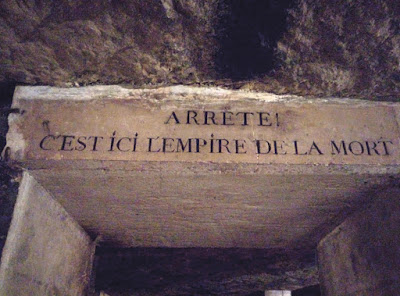 STOP!
IT IS HERE THE EMPIRE OF THE DEAD
Heart warming, isn’t it?
Another sign on the wall nearby: 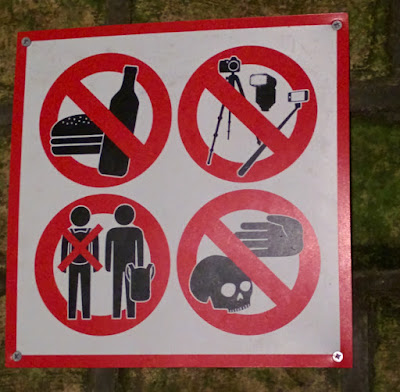 I certainly wouldn’t be caught dead eating in there!
I decided to take the camera thing very literally no selfie sticks, no flashes and no expensive cameras on tripods – my phone camera was fine.
The symbol in the bottom left corner was really unnecessary in my case – I wasn’t about to go stroking any skulls.

I’m guessing you had to take off your back-pack in case you accidentally knocked over any of the piles of bones – I’d be mortified if I did that! 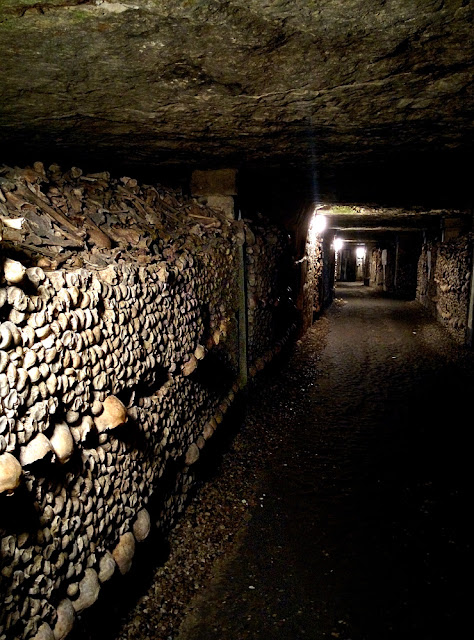 Bones line the walls for as far as the eyes can see, neatly stacked rows of femurs with skulls interspersed to form morbid patterns. 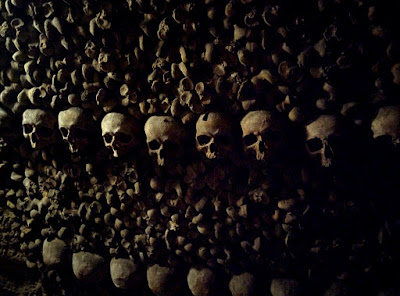 There were all kinds of structures made from the bones. 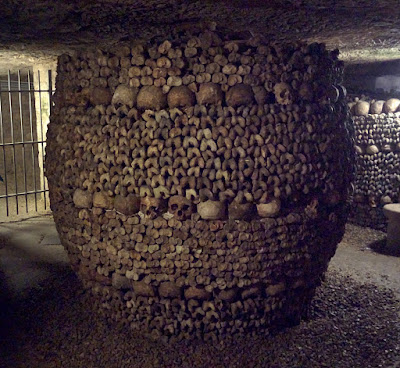 It was actually hard to come to terms with the magnitude of this underground tomb, hard to imagine that all these bodies were once people who lived hundreds of years ago, hard not to make terrible ‘dead’ jokes…

But there is nothing humerus about this place! 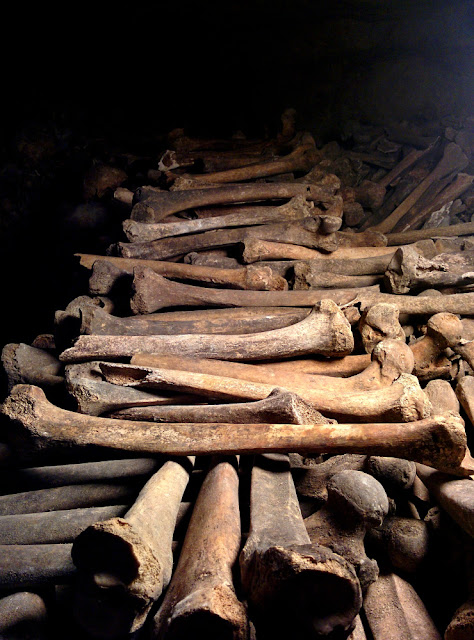 This well did not appeal to me at all, even though I was dying of thirst! 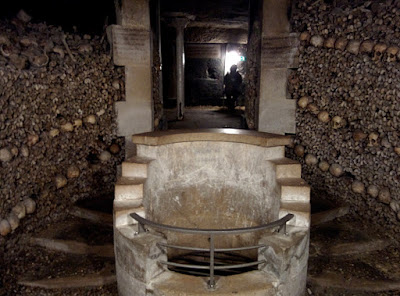 I was dying to know if this guy was Irish! 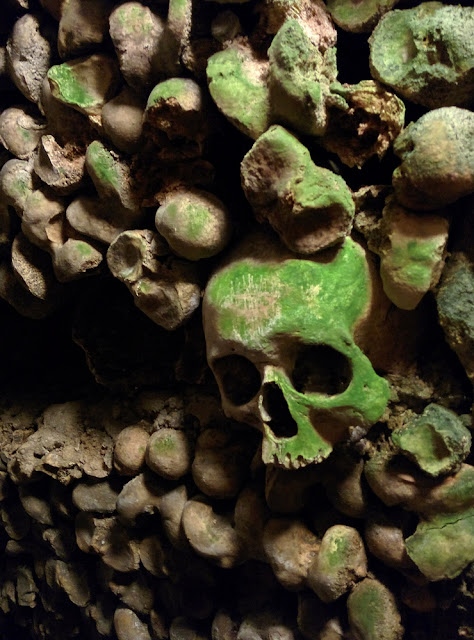 Okay, now that I’ve gotten that out of my system, I will say that I did behave myself while I was actually there and said a prayer for the repose of the souls that once lived in these bones. The catacombs were actually consecrated prior to the housing of the bones. Each cemetery and church has a cross that says where the bone are from and what date they were moved on.

This was another area that I know and have walked along a few times. 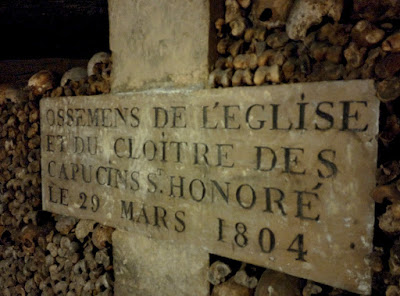 This skull did tug at my heartstrings. He looks rather sad and I wondered what sights the eyes housed in those sockets had seen and what stories that mouth could tell. 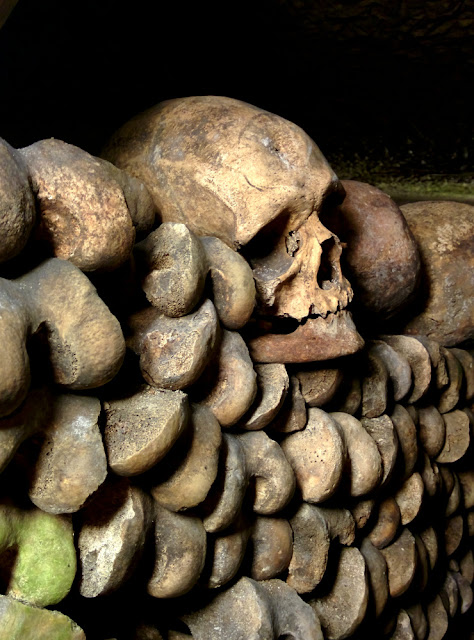 Perhaps if I been here and alive at the same time as him, we might have been friends, and maybe he’d even have laughed at my deadly jokes.

2 replies to A Grave Subject – The Catacombs of Paris