It was a cold Monday morning when I took a notion that I would like to cook a roast chicken from scratch. I hadn’t done that in a long time, but with the wonderful produce on offer here in France, I thought it would be a nice way to warm up the apartment and add to our sense of settling in.

The “big” Monoprix supermarket is about a 10 minute walk away. I found some butternut squash, big potatoes and giant mushrooms – all ideal for baking/roasting along with the chicken. But could I find a whole, uncooked chicken? No way!

After fruitlessly searching the aisles of the supermarket, I decided that I’d just go to the boucherie (the butchers shop) that I’d spotted in Rue Montergueil. This is a lovely market street full of specialist shops, like fromageries(cheese shops), chocolatiers, patisseries with a couple of boucheries.

But it turned out that the butchers’ shops were all closed on a Monday. So, trying to be happy that I was in a country that actually allowed the merchants a life, I decided that I could put off my chicken hunt until the next day.

We ate pasta that Monday night.

Next day I headed for the boucherie. I greeted the butcher in French, my bonjour seemingly improved enough to have folk even answer me in French. When I asked him if he spoke English he said no. (So perhaps my bonjour has not improved!)

I forged ahead in broken French asking him if he had a “poulet” for me. He pointed at a rotisserie with many golden-skinned roasted birds rotating on spits.  They looked delicious. I nearly gave in.

“Non merci, je faire le cuisine myself,” I said tapping my sternum vigorously. And, yes – I now cringe looking at the bad grammar, and lack of verb conjugation that is all too apparent when I have time to write it down. It’s just not that easy in the spur of the moment,when the dude’s staring at me with a whole lot of “Je ne sais quoi!” in his eyes! But he got my gist and brought me to a section on his bucthery cabinet which had a series of birds lined up.

He asked me something which may or may not have been, “What size would you like?”
“Pour quatre, s’il vous plait,” I answered holding up four fingers. It was only for the two of us, but I was hoping to get two night’s worth of dinner out of it.

He muttered something I didn’t catch and then held up a bird for me to inspect. And when I say a bird, I mean a full bird. It still had its feet and its head complete with spikey feathers giving it a stunned Rod Stewart expression. By the looks of things, it still had it’s innards too. I’m not squeamish but it did take me by surprise. I’m just not used to my dinner staring me down!

The Butcher weighed the chicken and then asked me something which I guessed was along the lines of, “Do you want me to prepare it for you?”

I nodded and watched with gratitude as he cut the feet off, chopped the head off and gutted the chicken. He asked if I wanted the entrails, head and feet (I think…) and I hastily declined. He wrapped the carcass in butcher-paper and put it in a plastic bag.

Then I got the biggest shock yet. He printed off the price ticket and handed it to me. The headless chicken cost €20.57! 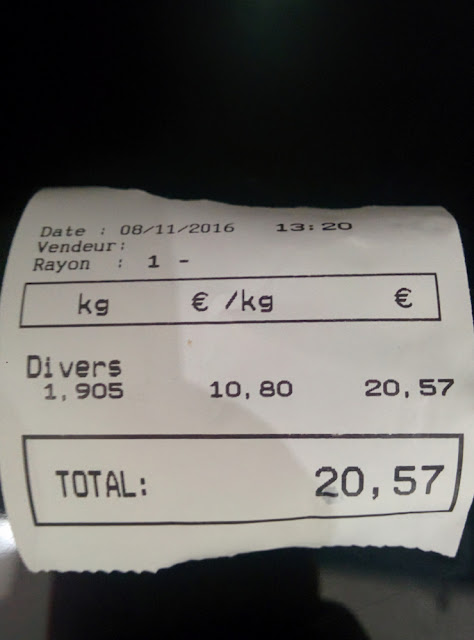 It wasn’t even cooked, so that didn’t even count the cost of the electricity required to roast it. I had to pay up. Without the French to question the guy and having just watched him just behead, hobble and rip the guts out of the chicken, I could hardly pull out of the deal!

As I walked home with my new friend in the bag, I noticed a church that I’d passed a few times had its door opened. I ducked in for a nosey – a habitat I’ve started since coming to Paris. 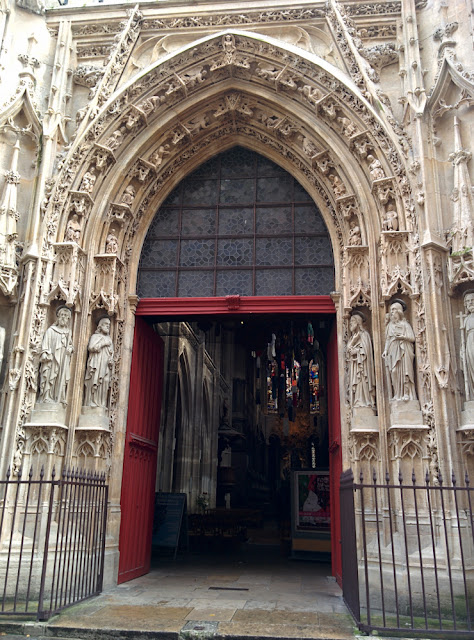 The church was beautiful and serene. I sat down near the front altar. They don’t have benches or kneelers in the churches in Paris, but instead have dainty little chairs all joined together. You just have to kneel on the ground if you feel like kneeling.

So I sat there to offer up a little thank you, and I placed the chicken on its own chair beside me. A minute or so of quiet contemplation later, my thoughts turned to how strange our journey through life can be. This time last year I’d been at war with the ground squirrels in my garden in California, living a sun filled yet culturally devoid life. Now, here I was sitting in a Gothic church in Paris beside this dead bird (whom I’d now named Harry in my head, even though he looked more like Rod Steward.)

For €20, I was beginning to feel like I’d bought myself a pet, even though it was slightly on the dead side. Nevertheless, at €20 this damn carcass was going to have to last us the week and not just two nights dinner. But the pressure was on. What if I screwed up the cooking and burnt it, or served it up under-cooked and we got a really expensive dose of food poisoning? Maybe a €20 bird wouldn’t have salmonella? Perhaps it was the purest of the pure and we’d be amazed by how wonderful it tasted. But that might be worse – perhaps we’d develop a taste for €20 chicken and never be satisfied by ordinary chicken ever again. Oh my God, what had I done?

It’s truly amazing where my mind goes off on tangents to when I spend all day by myself!

So after a few calls home to my mother, sister and God-mother for cooking-chicken advice, (any chicken, not just €20 chickens, because in fairness they hadn’t much experience cooking €20 chickens having more cop-on than yours truly!) each family member exclaimed in horror at the price, telling me what I already knew – that I could get a turkey for that price. Heaven forbid I go down that road anytime soon!

Anyways, it was time to get started. In the cold light of day, Harry looked like a nice normal chicken. 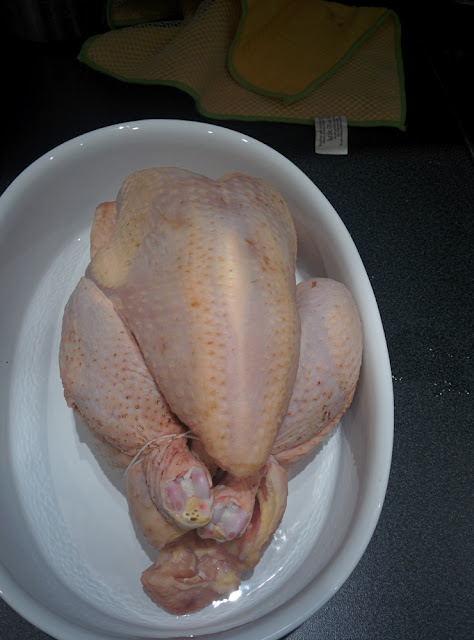 So I stuck him in a roasting bag with a sachet of Provence herbs I’d bought and let the oven do the rest. 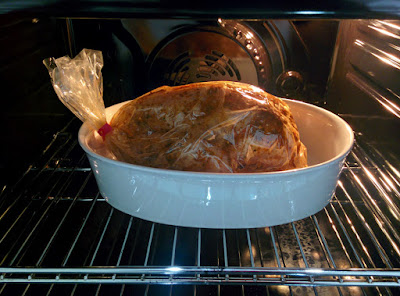 I chopped up carrots and butternut squash, adding a pat of butter and some tarragon and garlic and put it in a aluminium foil parcel 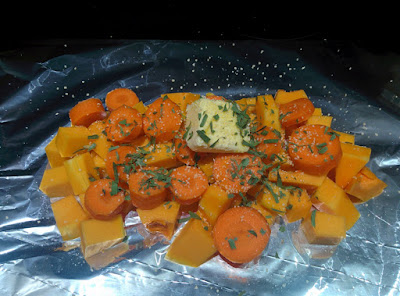 It was weird to think that this time last year all of that had come from my garden, apart from the butter and the €20 chicken of course! But the tarragon and garlic were sold in such cute containers that it expelled any gardening withdrawal I may have felt. 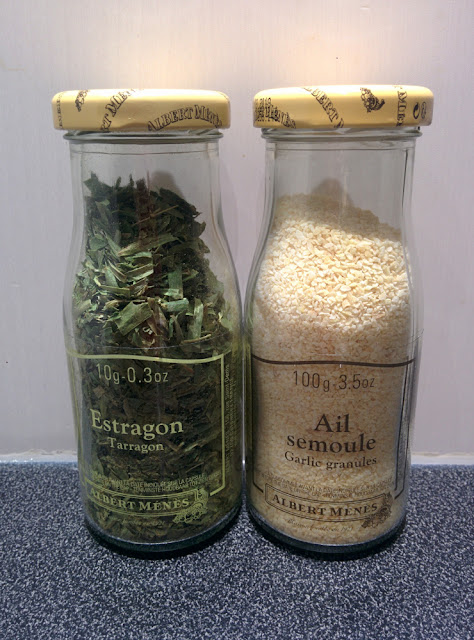 I put some giant mushrooms into a foil parcel too with a dab of soy sauce. 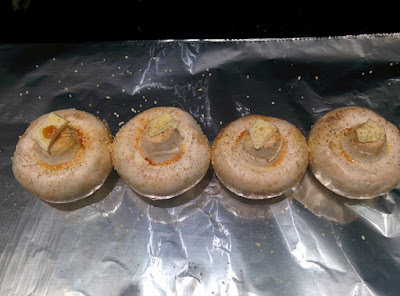 And put it all in the oven to roast. 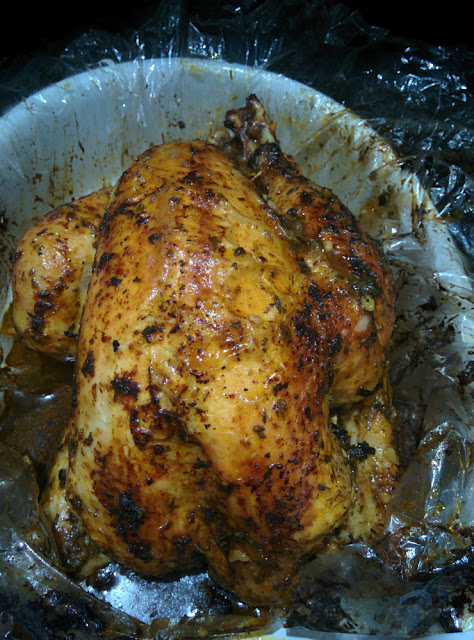 By the time My Husband came home the €20 bird was ready to eat.

“Perhaps it was a hand raised, free range, special chicken?” My husband suggested. “Maybe it was like a pet. Maybe it really had a name, a better one than Harry.”

“Oh yeah, well for that price,” I said. “I’d want it to have gone to school and gotten a few GCSEs!”

We made the bird last over three night’s dinners. Then I made stock from its bones for my special “€20 Chicken Soup.” This was not Chicken Soup for the Soul! But it did taste pretty good, but again not €20 great. 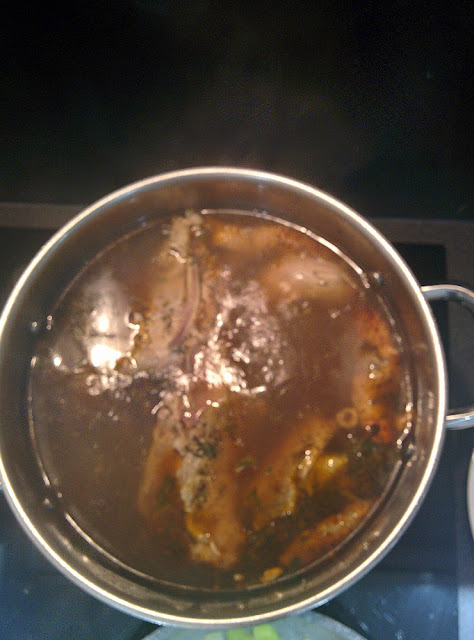 But the biggest kicker came the day after we finished the last dregs of the soup. In the tiny convenience shop just around the corner from our front door, I found a meat aisle, with this nestled cozily on the shelf! 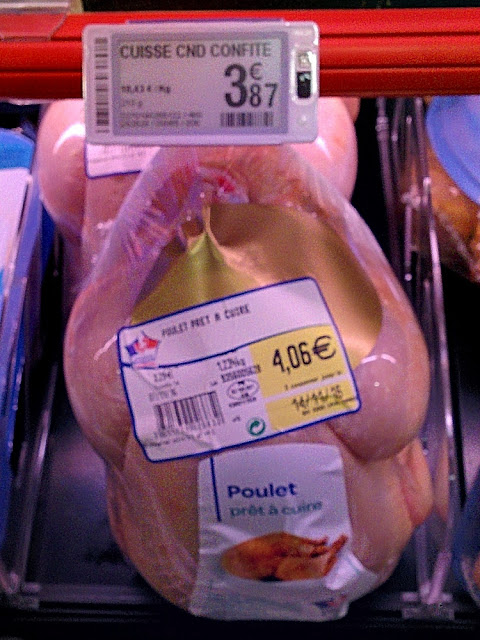 You know, it’s actually hard to beat a €4 chicken, even if it has no head, feet, innards nor a name!

Paris continues to baffle and amaze me – but most of all it makes me laugh…I mean, Ya gotta laugh, right?

6 replies to The Not-So Headless Chicken