The Irish are obsessed with death! The culture of waking the dead is, I believe, a very healthy practice and even provides a social scene for those of a certain age in the community. Death, and references to it, are employed by everyday language. For example, if someone is “dead on” that means they are really cool. Sometimes the same word can mean two completely different things depending upon which part of the country you are in. In Belfast, if you described something, such as an event or a night out, as “deadly” that would mean it was very bad. However, 100 miles south, in Dublin, something described as “deadly” is excellent – and that is how I am utilizing the word in this post’s title!

We booked a couple of nights in the Gresham Hotel on O Connell Street, Dublin’s main street and one that holds fond memories of walking with my Dad on visits to Dublin as a child. 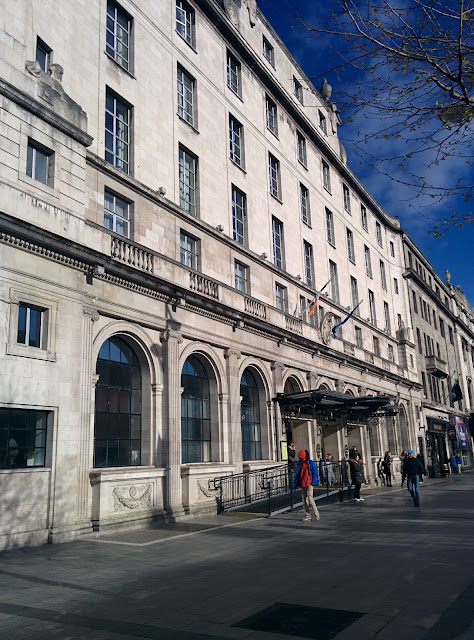 Once one of the poshest hotels in Dublin, it still conveys an air of grandeur, and the rooms are very comfortable too – not to mention – it serves a pretty decent pint of Guinness. 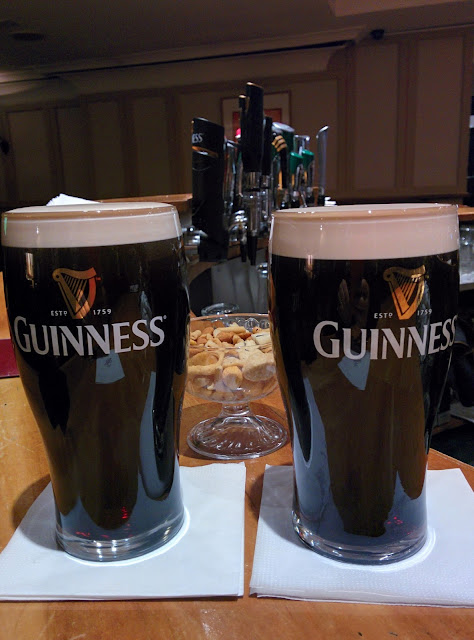 We met with My Cousin, and she brought us to a really great restaurant called The Church Restaurant, probably because it used to be a church. Hot tip – book a seat in the Gallery… this was the view from our table. I took this photo without even standing up! 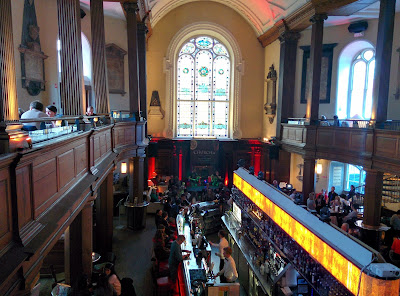 It was fabulous. The setting, the food, the company, all top notch. As a bonus there was Irish traditional music while we ate. When Irish dancers appeared and proceeded to dance a treble jig, I got goose bumps as I always do when watching that kind of hard-shoe Irish dancing.

The following day we headed to the much acclaimed Glasnevin Cemetery tour. It’s back to that whole fascination with the dead thing!

We took a cab as hailstones pelted down on us. The driver was great craic, keeping us entertained with stories. I asked him if they were still burying people at Glasnevin Cemetery (as in, is it still a working graveyard.)

Without missing a beat he replied, “If they’re dead, yes!”

The hailstones stopped as the taxi pulled up at the graveyard and the sun shone for most of our tour. That’s the Irish weather for you – especially in April!

The first item on the tour was Daniel O Connell’s tomb. 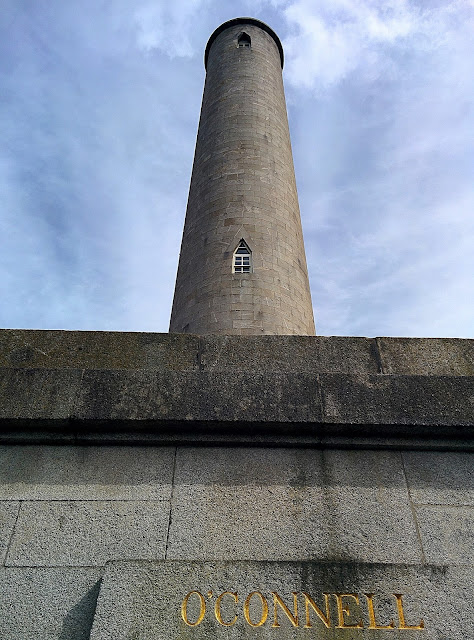 A pretty impressive tribute – and rightly so. This plaque explains it all, but the point to note is that he won religious liberty for the Irish people. 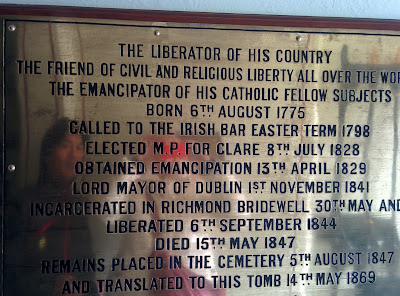 This a view of the tower from inside looking up. 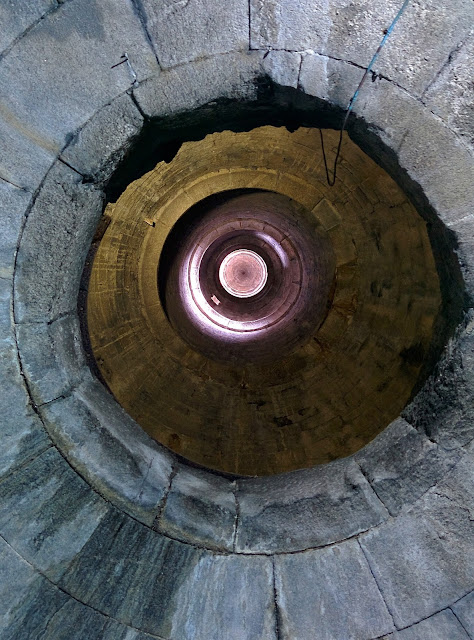 And here’s his tomb…you can see his wooden coffin peeking through. 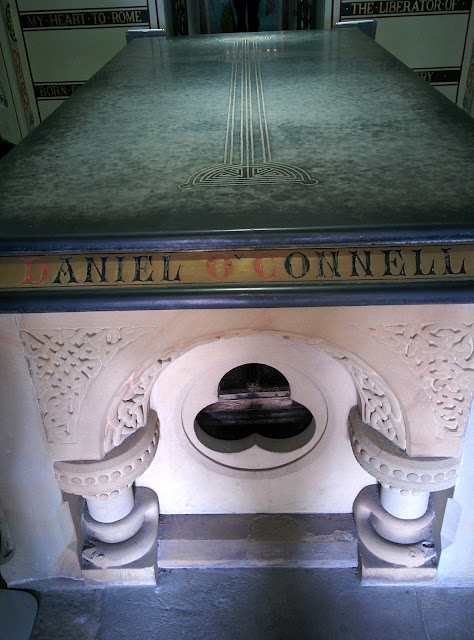 We didn’t take any more pictures in the cemetery but the tour was brilliant. The guide was really knowledgeable and served the facts up objectively, without any bias. It was a walk through Irish history as we passed the graves of the men and women who had fought for the rights and freedom of their fellow and future citizens. We owe them so much.

We visited the graves of Michael Collins and Kitty Kiernan where someone asked (tongue in cheek) “Is that where Julia  Roberts is buried?” We all laughed, knowing that they referred to the movie Michael Collins starring Liam Neeson and Julia Roberts. It’s nice to think these Irish heroes are remembered and associated with such glamor!

Afterwards we stopped by the Ambassador Event Center to have a look at their exhibition commemorating the 1916 Rising, the ill fated rebellion that seemed to have been a failure, especially when the British executed the leaders soon after, yet it was undoubtedly the turning point for gaining independence for the Irish people 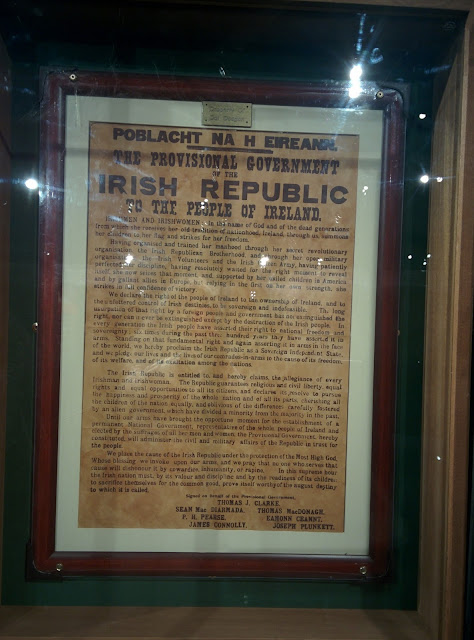 Notice below how women were to be included in the electoral process too – 4 years before women were allowed to vote across the USA! 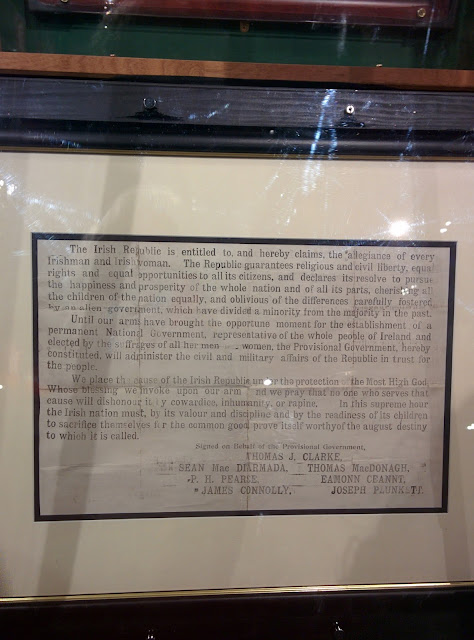 The exhibition was really good. As you walked through, sounds of explosions and shooting got the heart racing. The staging was great and gave some insight as to how terrifying the whole thing must have been. 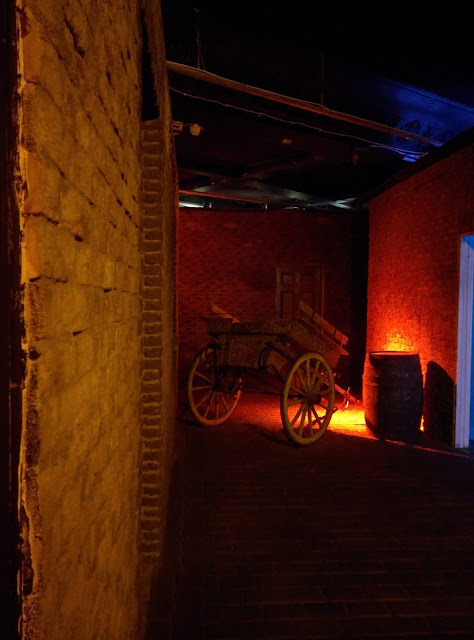 After the rebels surrendered, the leaders were taken to Kilmainham Gaol (“jail” in American English) where they were sentenced to death. Kilmainham Gaol is actually now a tourist destination – one we still have on our list. It was booked out when we wanted to go, but the Ambassador had a mock up of the jail. 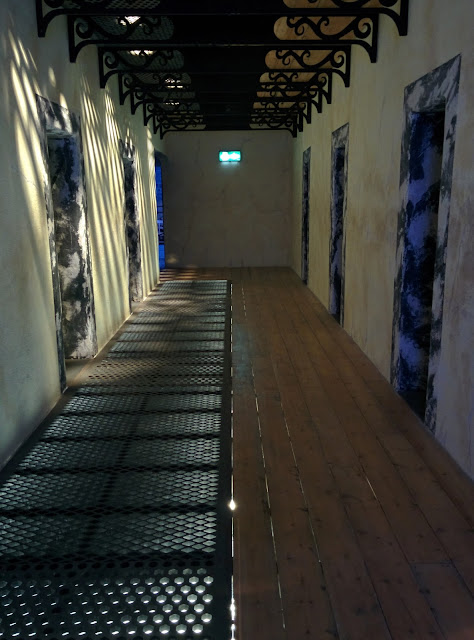 A lonely and poignant scene, represented by this chair – James Connolly had to be strapped sitting up because he was too badly injured to stand in front of the firing squad. 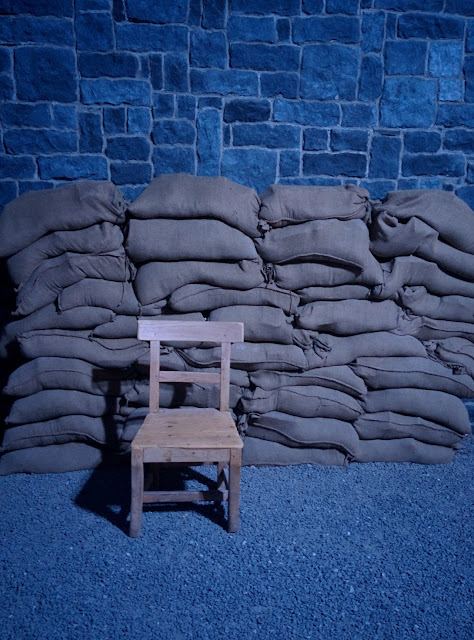 As we took a peaceful stroll by the river that evening, I offered up a silent prayer for the sacrifices my forefathers made for the freedom of the Irish people. Some parts of the island still have work to do, but please God, we’re nearly there. It’s such a beautiful country and we owe it to ourselves to make it work. 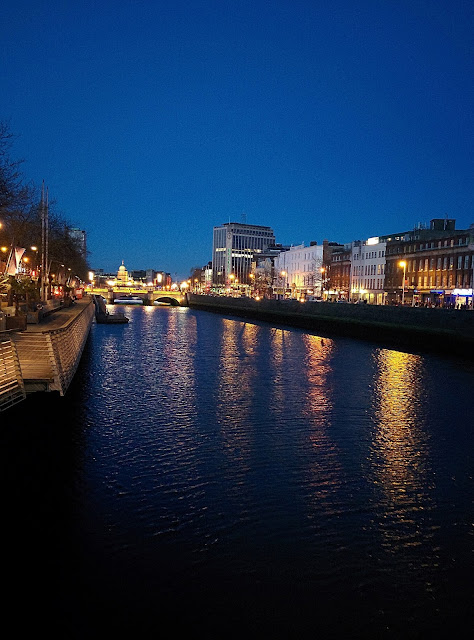