I nearly had to bribe Jane* our GPS into routing today’s portion of the road trip. We needed to cross the Sierras. We’ve done the Tioga Pass, through Yosemite, many times and traversed the Sonora Pass, the next pass to the north, a few times as well. We were out to explore America, not drive the same old roads all over again, though they are stunning. We set off intending to find additional stunning!

Having forced Jane to map us along Hwy 4 and the Ebbetts Pass, we hit the Western Sierra foothills and were met with poor visibility  and the stench of smoke. We checked the Cal Fire website and saw a few fires come up on their map, but they were miles away. Aware that the smoke can travel a long way, it was still disconcerting that we were traveling on a road that we knew nothing about with patchy connectivity, in fire country, in fire season, and during a massive drought. Most of the pictures were taken from a moving car – apologies for the less than perfect composition – though I did have a chuckle at the beer can that showed up in this one! 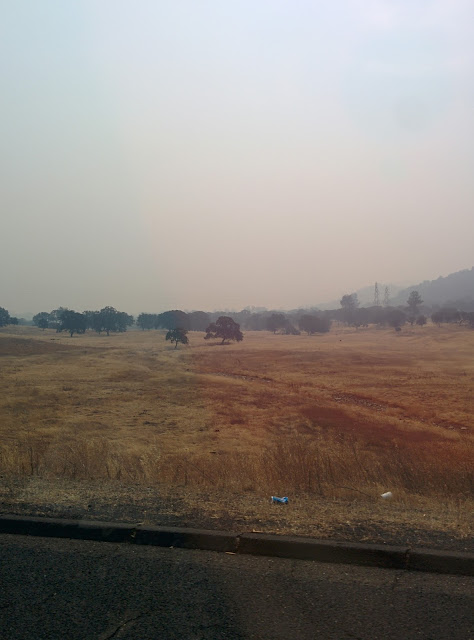 Even though Jane had gotten past the please-take-a-U-turn stage by the time we got to Copperopolis we needed to stop for gas. 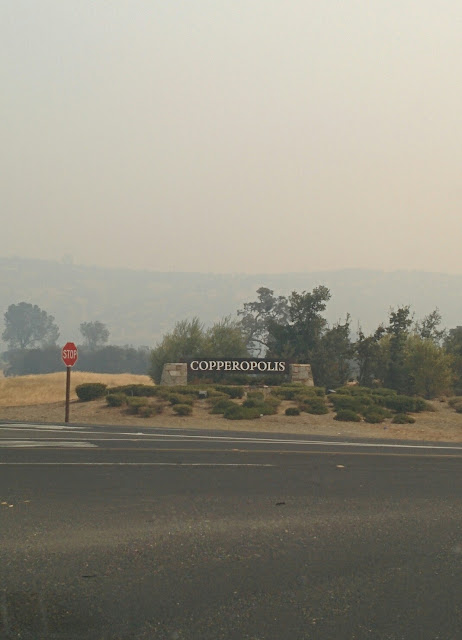 There were two girls working in the gas station. When they greeted me with a cheery welcome, I asked them if they knew where the fires were. They said that the smoke was from the Butte fire further north and that there were also some burning in Yosemite. They asked me which way we were traveling. I told them I was taking the Ebbetts Pass. They said they would check the road conditions for me. Then, as I stood there, one of them lifted the phone and called the sheriff. In a few short minutes she had the answer – all clear. I was extremely impressed at their willingness to help keep a total stranger safe. That’s what I call a full service station! 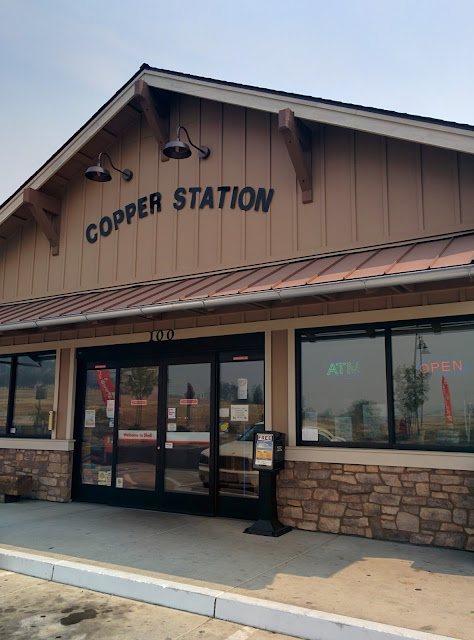 The air cleared as we climbed over the pass. There were plenty of warnings at the beginning of the pass about steep gradients and winding roads, but for someone used to roads on the West Coast of Ireland these roads were totally fine… 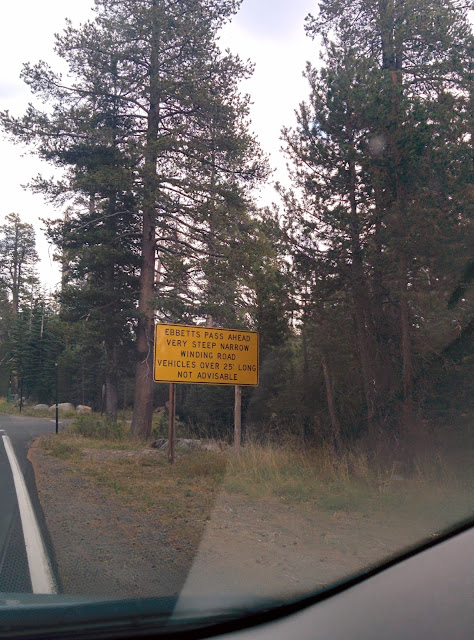 Okay, so many some of the turns were a bit full on… 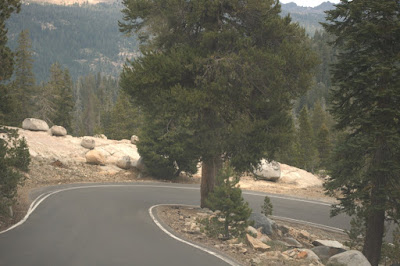 But the views were worth it! 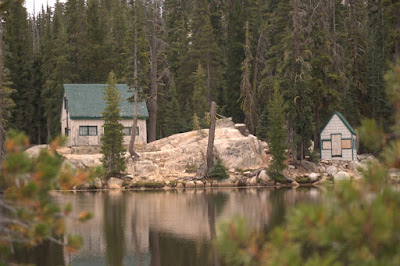 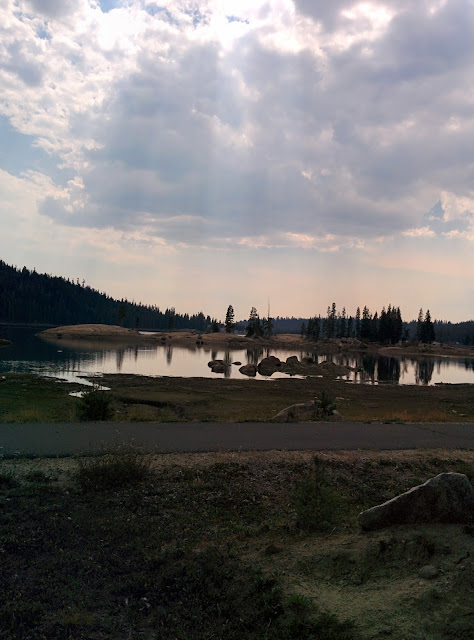 Sections of the road told the story of the aftermath of the blistering fire season we’ve had in California.This went on for several miles, often on both sides of the road. A part of the natural cycle, it was still bleak to look at. 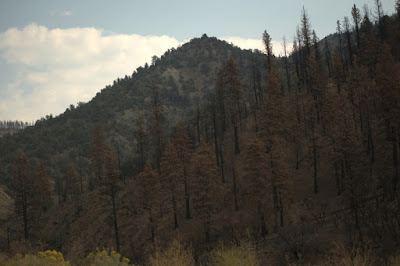 The Eastern Sierras did not disappoint. I love the wide open vistas. The barren landscape tugs at me in a way I find difficult to explain – a mixture of awe and terror. Despite its beauty, I can’t help trying to imagine having to survive in this harsh and unforgiving terrain without the modern conveniences! 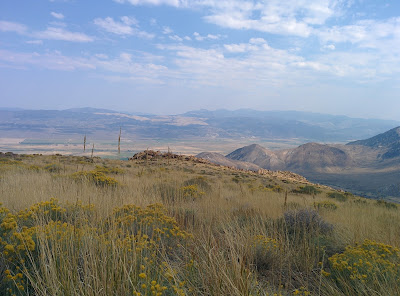 Once through the Sierras, we hit my favorite highway (so far!) in the US – Highway 395. Wanting to explore, we once again bullied Jane into taking us along the road less traveled and insisted on going via Smith Valley to Tonopah rather than through Lee Vining. 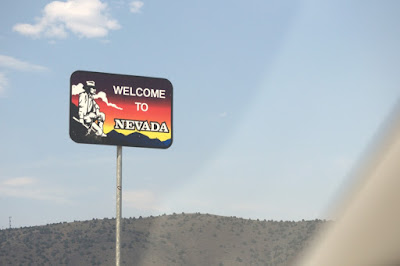 Nevada seems to be vast desert salt pans separated by jagged peaks. There is no in between – it’s either step sides or flat flat flat.

However, this route delivered several surprises. We loved the Wilson Canyon on Route 208. 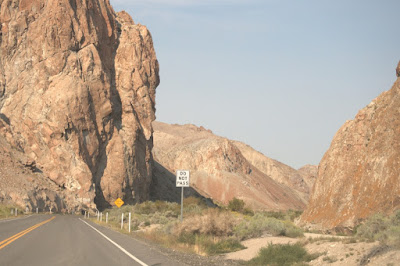 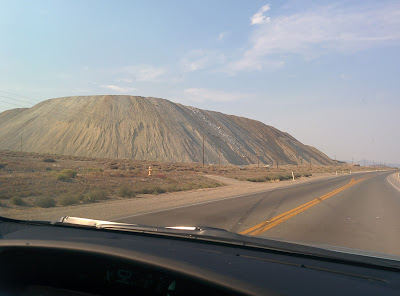 This heap of gravel was beside a huge (I mean gigantic!) pit right beside the road. It was the size of the nearby hills. If it wasn’t for it’s flat top and perfect symmetry, one might think it was another mountain or cinder cone.

Just when all the desolation was starting to overwhelm, a shimmer appeared in the distance. A mirage maybe? Not this time. Walker Lake is a 50 square mile natural lake. I liked the shade provided for the picnic tables – not a mission of getting a tree to grow here! 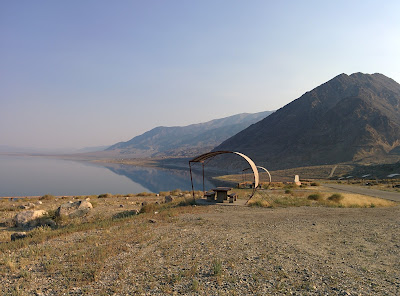 And of course, you wouldn’t be in Nevada if you didn’t have the the long straight roads all the way into forever… 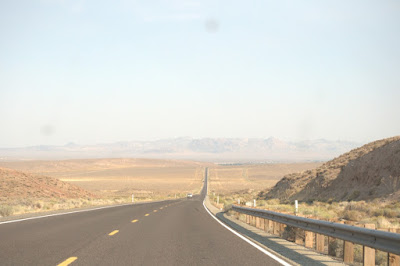 Color was draining out of the day and pooling in the Western sky as we approached our destination – Tonopah. We drove past the Clown Motel, contemplated it for a brief second. I was caught between thinking it could hilarious or horrendous (It was very very cheap – and not necessarily in a good way.) My Husband, having more refined tastes, suggested we push on to see what else the town had to offer. We settled on The Mizpah, opting for an economy queen room. It was small but very very plush. 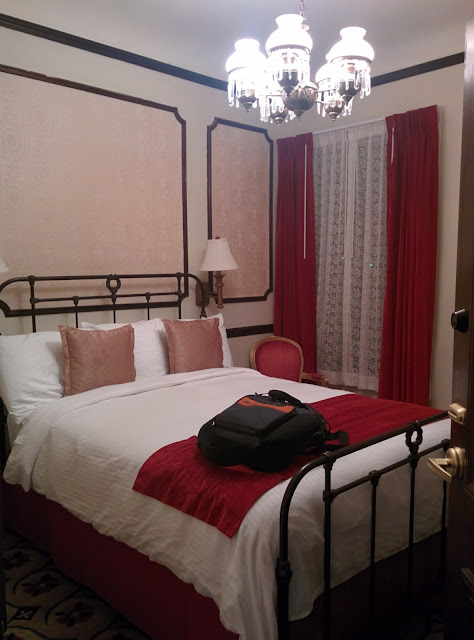 The Mizpah is right in the center of town. It reminded of the type of old hotels you had in small towns in Ireland. The kind of establishments Maeve Binchy would have referred to in her novels, places that served as the pivot point for the town and its community. 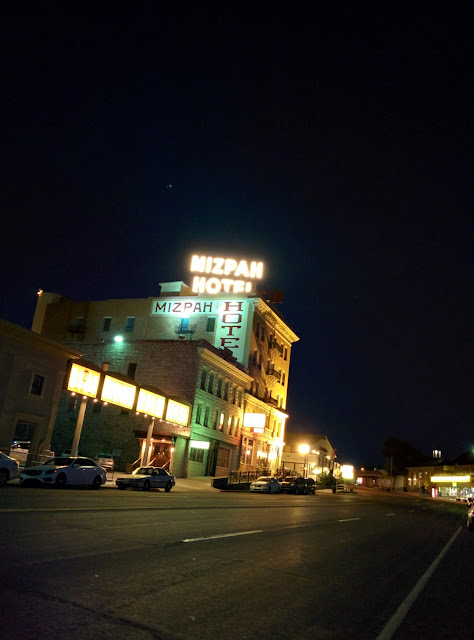 It’s interior is like the posh old Western saloons that you see in the movies. The kind of place Scarlette and Rhett would have stayed had they come this far (though it wasn’t around in their day having been only built in 1908). It is a listed historical building and even has a resident ghost – the Lady In Red – who is said to roam the hotel and leaved pearls at random. I hope she’s quiet because I’d like a good nights sleep, but I’d be happy to get a pearl!

It’s a been a long and interesting day and tomorrow we are set for Zion via the Extraterrestrial Hwy – not sure how much excitement I want along that road  – find out if I meet ET in my next post.

*Click here to find out why we call our GPS Jane