Summer has arrived, bringing with it my first crop of cucumbers. Two cukes to be exact! But that’s enough for one jar of pickles. I’m hoping to get a glut so that I can pickle more than one jar at a time, but for now, this will have to do. Notice how the lettuce comes in all a once but the pickles in ones or twos! 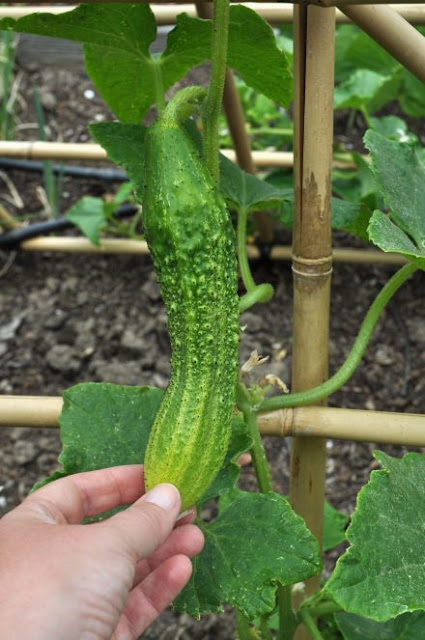 This time last year the whole pickling process was a complete mystery to me. But isn’t the internet wonderful? One afternoon of research brought me to the conclusion that I should at least try to make pickles. The important part seemed to be processing them in boiling water. This is to kill nasty germs – like botulism. I was nervous when I ate my first batch last year but no-one got sick and they tasted so much better than shop bought (of course!) I’d seen this process on the one other occasion I’d partaken in preserving food, namely watching someone else turn my pomegranates into pomegranate jam, or jelly or preserves, or whatever they call jam here.

Not wanting to buy too much fancy canning equipment, I tried to get by with as little new stuff as possible. I belief in reduce, reuse, recycle, and I’m a stingy git!

You do need the special jars and lids. I use wide mouthed quart (approximately 500ml or a pint) jars. 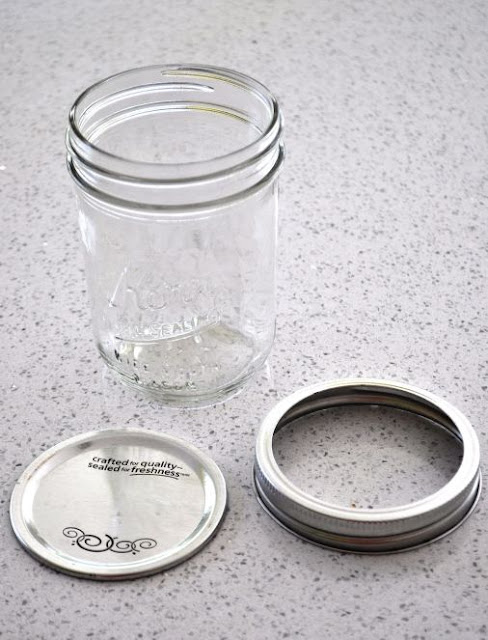 But the jars and the rims of the lids can be reused. Apparently the discs need to be replaced because they only make a good seal once, but these jars can be used in the freezer. I use the old discs with the rims in this case, since you are not relying on the seal as the freezing itself is what keeps the produce safe.

After nearly scalding my self a few times, I gave up trying to use BBQ tongs and sprung for the special “jar grabber” thingy-ma-jiggy. Good job I have a camera because I’ve no idea what these are called. 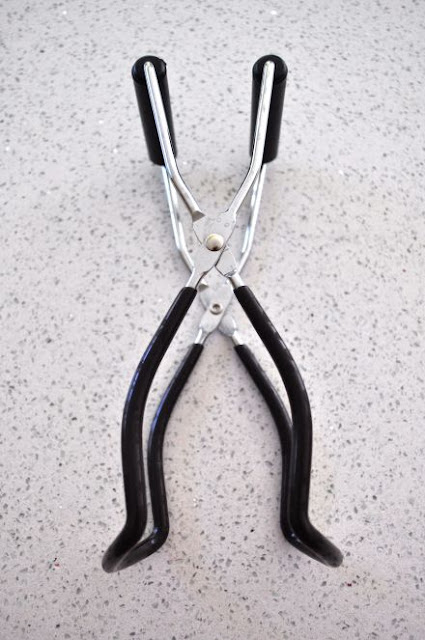 You can get big canning pots. A pot that can hold water deep enough to go over the lid of the jam jar will work. If I’m only doing one jar at a time, I use an asparagus steamer. 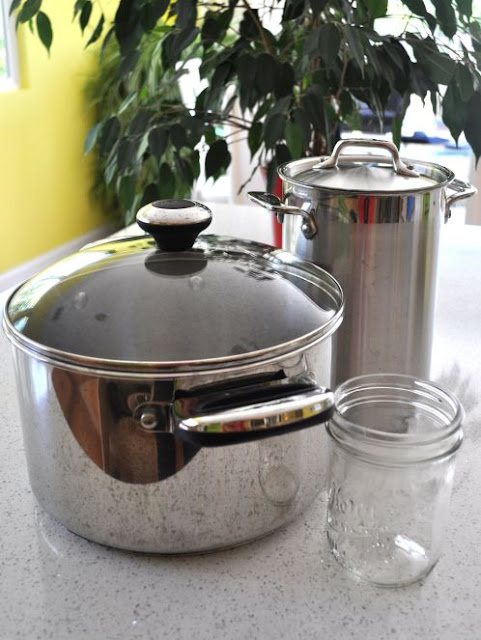 There are lots more recipes online. I chose this one because I have all the ingredients in my garden, and it is the simplest. It makes 8 quart  jars, and if I only have enough cucumber for one jar, I scale it down acordingly.

8 pounds 3 to 4 inch long pickling cucumbers
4 cups white vinegar
12 cups water
2/3 cup pickling salt (i.e. table salt will do as long as it is non-iodised though I did use iodised salt last year and got away with it!)
16 cloves garlic, peeled and halved.
8 sprigs fresh dill weed
8 heads fresh dill weed (the seed bit)

1.  Wash the cucumbers. I slice mine but the original recipe didn’t mention it. I guess if you use more smaller pickles – like when that glut happens – then you don’t have to slice them.

2.  For really crunchy pickles, soak them first in iced water for at least 2 hours (I’m impatient and have gone a lot less time and it seems okay) but no more than 8 hours, refreshing the ice if it melts. 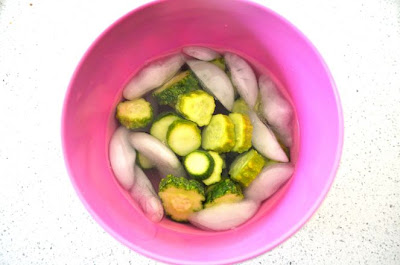 3. Sterilize 8 quart canning jars and lids in boiling water for at least 10 minutes. You can use this hot water again to process the jars, so don’t throw it out.

4. Combine the vinegar, water and salt over medium heat and bring the brine to a rapid boil. Use it at this rapid boil to keep the pickles crisp.

5. Into each jar put 2 half-cloves of garlic, one head of dill, enough cucumbers to fill the jar, 2 more garlic halves and 1 spring of dill.

6. Fill the jars with hot brine and wipe the jar’s rims of residue before sealing the jar.

7. Place the jars in a water bath so the water covers the jar and boil for 15 minutes.

8. Remove the jars from the water bath. As they cool and the air inside contracts the lids will depress. You can hear them pop. This is how you know you have a good seal. 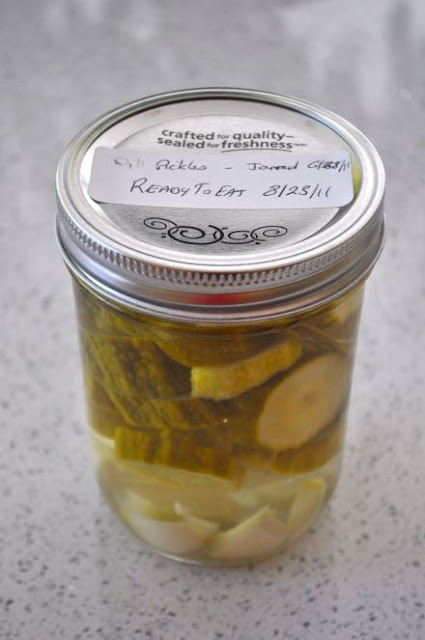 10. After 8 weeks they are ready to eat. Refrigerate after opening. Unopened and stored in a cool dry place, pickles will keep for up to 2 years – but they taste sooo good they’ll never last that long.

7 replies to What a Pickle!