It’s raining plums in our front yard right now. Big, purple, juicy, sweet, delicious plums. The kind that burst when they hit you, leaving a magenta splodge, so you look like you are in the middle of a paintball game. When you stand on the ones all over the ground, they squelch up the sides of your flip-flops, staining your feet red with a warm, sticky goo. I have now a designated pair of shoes for plum picking to avoid ruining any more. And yes, I suppose I should be picking them up, but there’s just so many. 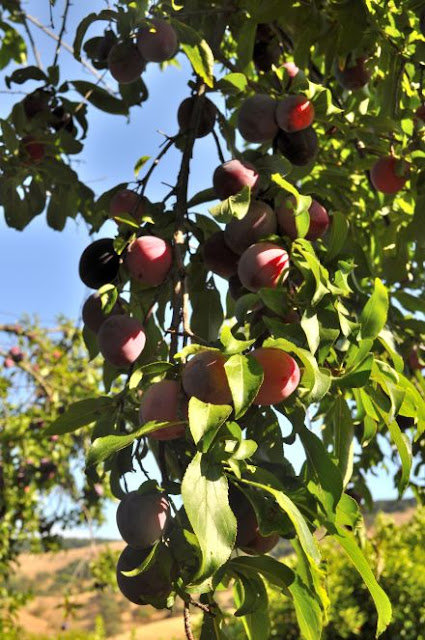 This is the tree that 18 months ago, I didn’t even know we had. Not that it is small or tucked away in a corner, but because it was over-grown with giant privet, oleander bushes and ivy. As I chopped those bad boys away – one branch at time – I found this bedraggled plum tree. And, oh boy, is it happy to be standing alone with its toes all covered in mulch! I’ve never seen a tree with so much fruit.

My friend Mareese,who baked the wonderful graduation cake (and is generally brilliant at all things culinary), came over this week to teach me how to make plum jam. I cashed in on her expertise (and canning equipment) by digging out some recipes for plum chutney and plum sauce. The internet is a wonderful place to get recipes and ideas for using up produce you may have a glut of. It’s fun to experiment too. In this case, I have more than enough plums if something doesn’t work – I can throw it out and start again.

With the help of Mareese’s wonderful kids Allison and David, and my lovely neighbor Laurie, we held a “catching sheet” below the tree while one of us shook the branches. In a matter of minutes we had a tub full of plums! And the tree looked as though nothing had been taken off it. 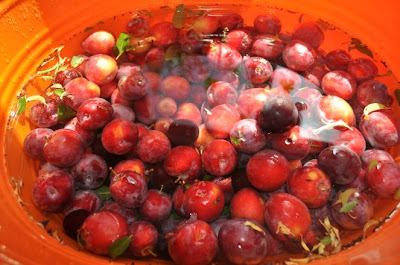 We washed the plums in the tub – that’s why the photo has a weird sheeny look to it.  The jam recipe we were following called for the plums to be peeled and stoned. This site gave great directions for the entire process. Click on the link for a total education in making plum jam. 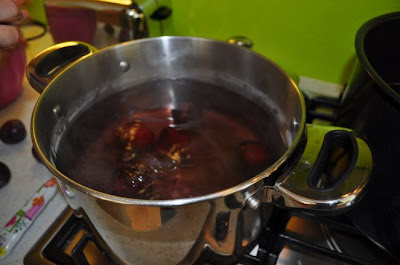 then straight into iced water. The peels came off fairly easily but not quite as easy as when you do this with tomatoes. 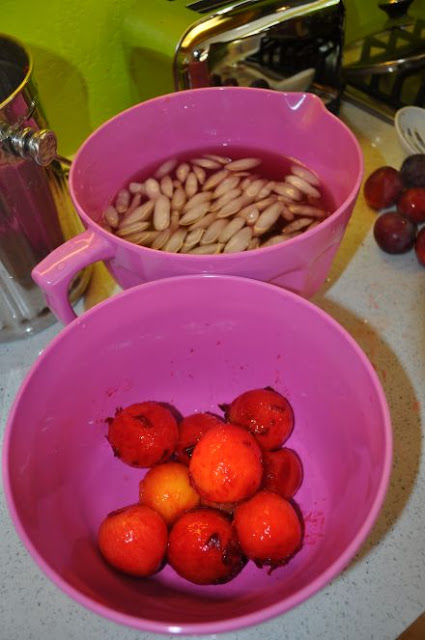 Stoning and chopping all those plums is the most tedious part. 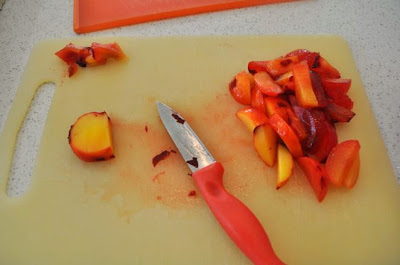 Not wanting to re-invent the wheel, I’ll encourage you to click on the links to get the recipes and instructions for actually making the jam. Our first batch of jam was delicious – the sample toast didn’t even last long enough to photograph. 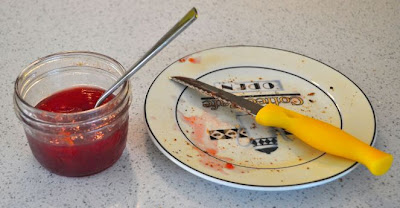 We used 1/2 pint jars which were much easier to handle and needed less water in the canning bath. Horrified at how much sugar is in jam, we tried to lower the amount, with the result that our jam was a little on the runny side but still set enough to stay on the toast.

The second batch of jam, I kept the skins on and put in all the sugar. It had a nice texture, with the fruit holding together in nice chunks, and it set well. If I did it again, I’d forgo the peeling process!

We made the chutney next. It looks gorgeous, but it needs to sit for 6 weeks before we can get the full taste. 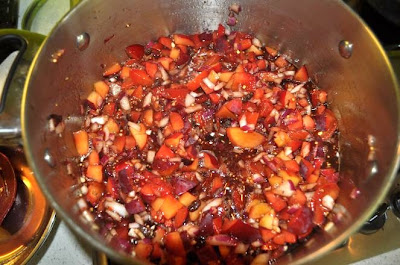 While it plopped and bubbled on the stove, we had a break for lunch. This time my own home made recipe. – Philadelphia cream cheese and sliced plums. 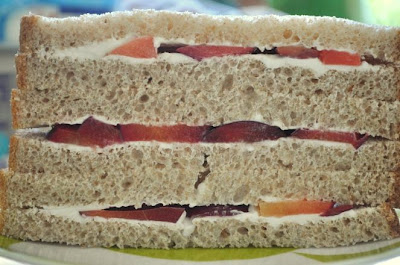 The kids scoffed them down and came back for more – result!

My favorite creation of the day was the Tangy Plum Sauce. 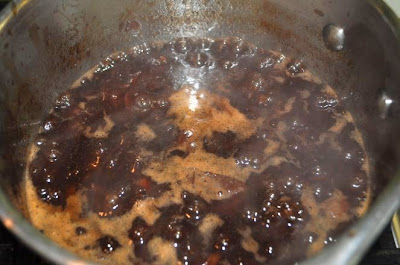 We changed two things in the recipe. first we used Chinese five spice because I didn’t have allspice, and second, we put the sauce through a sieve before we canned it.

It was a good day’s work – lots of jam, chutney and sauce, and even a couple of jars of pickles sneaked in there too. 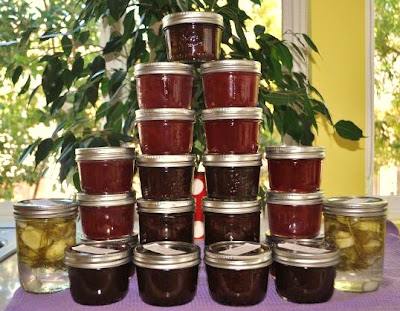 It was exciting to get three distinctly different tastes from the plums.  The plum sauce was my favorite but only makes a small amount, and I really wanted more of that taste. So that evening I went back out and pulled another basket load of plums. 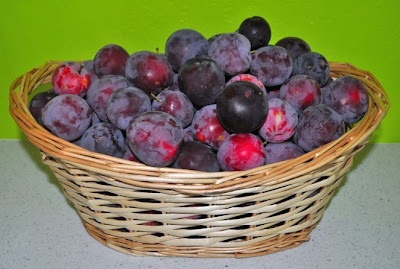 I roughly followed the recipes for the plum sauce, but I cooked the onions and garlic first in a frying pan, then added sliced chicken breast. When the meat was cooked, I threw in the rest of the ingredients. It was so tasty! 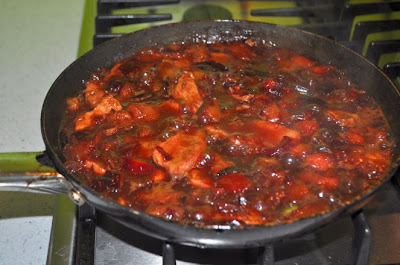 Loaded with sugar though, so the next night I experimented.

I fried some salmon fillets in a pan. I then added a cup of coarsely chopped and stoned plums, 1 table spoon of brown sugar, a teaspoon of vanilla essence, scant 1/2 teaspoon of red pepper flakes, juice from 1/2 lemon and salt to taste. I let it all simmer together.

Talk about gourmet food – every thing on this plate is from my garden except the salmon. 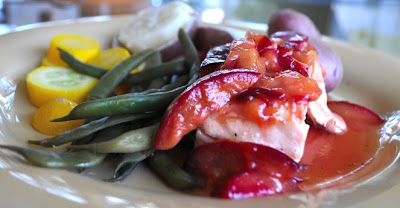