Australia has the Gold Coast, Africa the Ivory Coast, and Northern California? I’d call it the Grey Coast. Having checked the weather forecast – which lied, saying it would be clear over the weekend – we headed for the coast, admittedly in the hopes for a little cool down, but got more than we had bargained for. The sky was grey, the sea was grey, even the sand was grey. 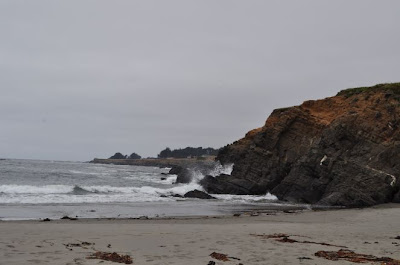 For some bizarre reason even the houses are painted grey! 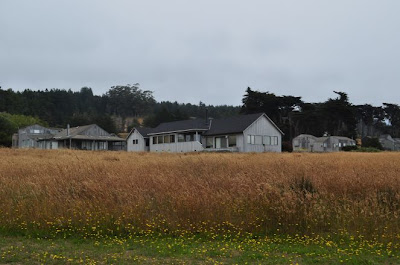 California’s North Coast is perpetually shrouded in sea fog, especially in the summer months. Two miles inland the sun will be splitting the trees As it was in Duncan Mills where we stopped for a cuppa as we followed th Russian River Inland on our way home. 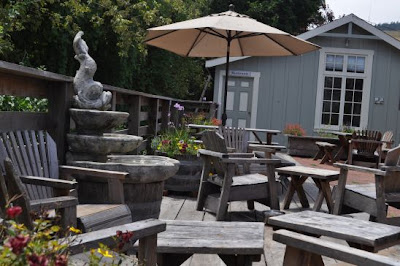 As soon as you venture any closer to the edge of this great continent the fog roils and its wispy tendrils soon envelope the unwary traveler – such as us.

We had approached the trip as somewhat of a reconnaissance mission – a scouting trip to see what was there. Now we know – overpriced accommodation, limited (very limited) beach access and poor tourist facilities.

I’ve been spoiled beyond repair by Ireland. I’ve always found it hard to beat the the coastline there, whether it be the ravaged western coast, battered by the Atlantic, the wide (and usually empty) beaches lying between the rugged cliffs and bluffs, beaches with fine white sand, some even with pink sand, and others covered in pebbles smooth as a babies skin; beaches where the tide goes out so far you’ll think it’s never going to come back, and where you can take advange of the hard, damp sand and learn to drive. Other beaches have sand so soft you can bury a beachball and never again find it. (If you find a beach ball on Ballybunion beach, it’s mine!). There are stretches of coast with rocks so jagged and fierce it makes your heart beat faster just to watch the waves tear them selves into a fury of foam against them. Cliffs so high you get vertigo 100 yards from the edge. Sweeping estuarys, sand bars and dunes, strange rock formations that make you believe that giants could have once ruled this land and built these features, cliff-top castles that defy gravity – all this in a 100 mile stretch.

The trip from Bodega Bay(made famous by Hitchcock’s movie – The Birds) to Manchester, California is 70 miles of fairly uniform cliff top driving. It’s the utter repetition of the same scene that loses me. The land dips down where the Russian River meets the sea, but it’s pretty much a straight line, as if God cut the edge with a hand saw and forgot to finish the job having left his jig-saw in Ireland or at the Fjords of Norway or Southern New Zealand.

All along the road are sign posts that promise “Coastal Access” but many are closed – probably due to the parks closures. In another place that was open, we paid $6 to park the car – I don’t mind supporting the parks, but I can’t see where my money is going here. In Ireland, you park where you can and scramble over whatever is in the way to get to the sea. In the US the whole trespassing thing is a lot more ominous and what with the gun toting that goes on, I’m not sure I’d like to risk it! So after parking up and paying our fee, I was heartily annoyed to be shepherded along the one path available – all other paths sporting the following sign. 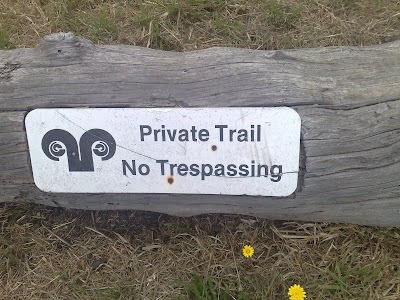 Why make a trail private? It is obviously there for someone to use (not for habitat preservation in this case). If you aren’t going to damage anything, why be so selective? It’s not like hoards of people are going to descend down this path in this Godforsaken place! It makes me mad to think people are so greedy that they’d keep a beautiful view or a pretty place away from the eyes of another.

The tourist facilities were simply limited. The locality didn’t seem too keen to attract travellers – a fact that bemuses me in this economy. However, I was charmed by the tiny general stores that popped up by the occasional campground. 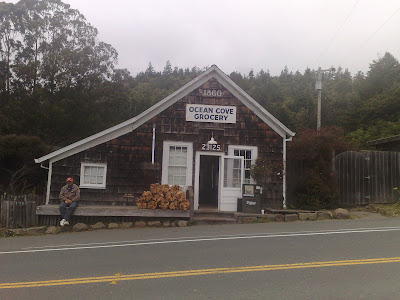 Gualala seemed the most welcoming of the towns we went through. The gas station there had the most beautiful mosaic that a local informed us cost $5000. 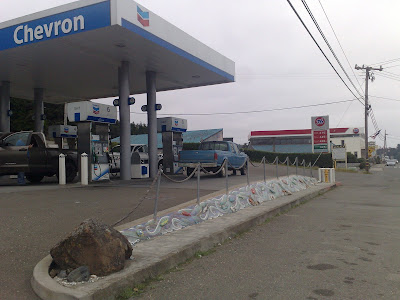 It was some kind of a memorial judging by the names on the plaque, and I though it was beautiful – a refreshing splash of color in a grey land. 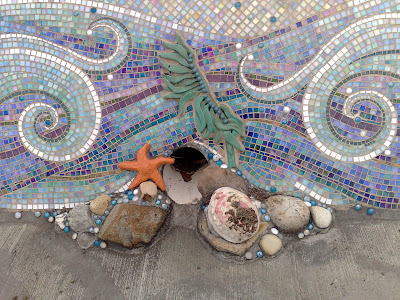 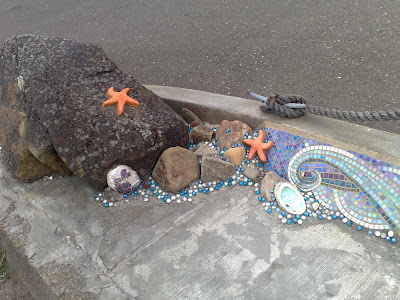 We stayed overnight at Fort Ross Lodge. The room was expensive for what you got, but we realized that once here you had little choice – and no internet or cell phone reception. A bonus as far as I was concerned. A real switch off from life. And even my high tech husband didn’t seem to suffer too much, though we did jump on and check our emails when we found a spot by a lighthouse that did have data connection!  It reminded me of being a kid and my parents driving us to the seafront at Tramore Co. Waterford, parking the car overlooking the strand and then sitting in the car reading their newspapers as my sister and I fought with boredom in the backseat, listening to the rain pelting on the roof of the car.

Fort Ross actually had a fort. 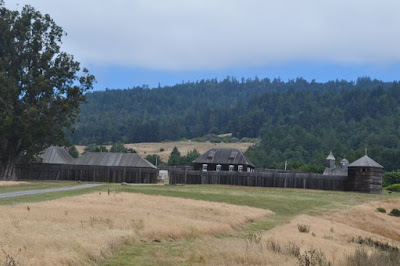 It was a Russian settlement, and its inhabitants nearly wiped out the population of seas otters along that coast. The Fort was nicely restored. The chapel was cute. 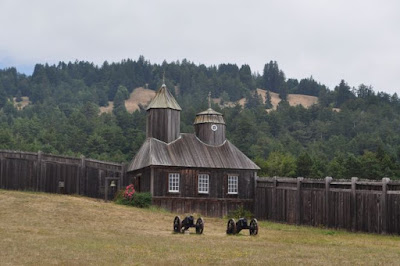 The armory and some of the interiors of the barracks were well furnished too. If I were in charge, this would have had a mock up of life in its heyday with food tastings and people in costume and a wee coffee shop and possibly some vodka for sale! But the rangers talk was all that was on offer, and she seemed to have a good idea of what went on.

If you ever get the chance to travel in Ireland, go to Bunratty Castle, County Clare, or Cultra, County Down, to see what I mean about bringing history to life. In fairness, Columbia State historic park in California does this, so why not here?

Whilst I have been scathing in this report, I just feel that California can do better. And the coast line does have its moments – even if they are few and far between… 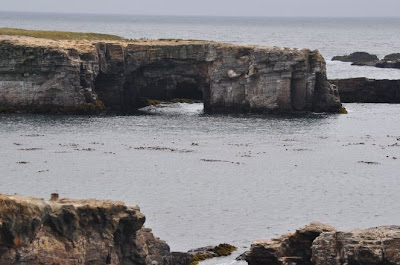