There are many challenges in gardening, especially when you are gardening in a climate that is different to what you are used to. I like to try growing new things. I managed to get a sweet potato from the supermarket to sprout and grow. I’ve kept it in a large pot to limit any possible damage that may arise from viruses and other diseases with the supermarket bought root.
First, I was surprised by the beautiful leaves, until I saw the flowers! They are lovely, but do I cut them off to send the energy to the root? I decided not to bother. I’ve given this project ornamental status. If I eat from it, then I eat! 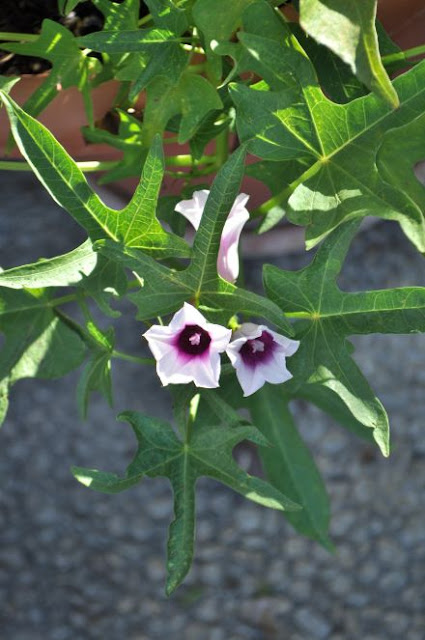 In many cases, it is recommend that you cut off the flowers to strengthen root crops. This year I discovered Garlic scapes. These are the flowering shoots of the garlic and should be removed at an early stage. The good news is they are edible – great in a stir-fry. In fact, all parts of any of the Allium family are edible. Mine developed when I was in Ireland and were quite advanced when I got home. But chop it up and fry it in a wee pan and they are delicious.

The bulbs did suffer from being left with the flowers developing too long, but the only variety that had produced scapes was the Chinese purple. I think it was a fairly decent crop. I wish I’d planted more! Now, I’ve just got to let these dry out in a shady spot with the leaves on so they can take in that last wee bit of goodness. 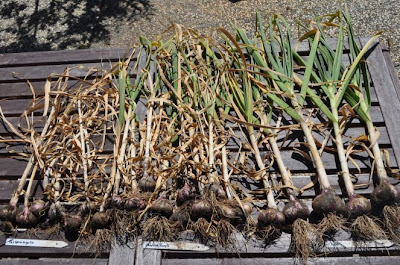 Of course, another challenge is competing with the small furry natives. While we were in Ireland, the squirrels had themselves an almond party! Not a single one left on the tree, but lots of shells on the ground. 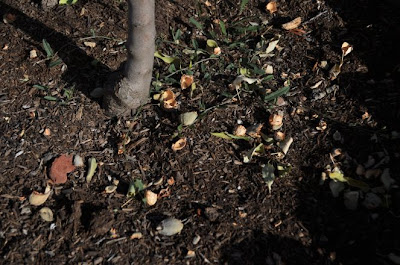 Timing is all important in the garden. Right now I’m waiting for my lettuce to set seed so that I can collect it for the next crop. It seems to take forever and it looks so unsightly, like I’m a lazy gardner who hasn’t cleared away the rubbish! 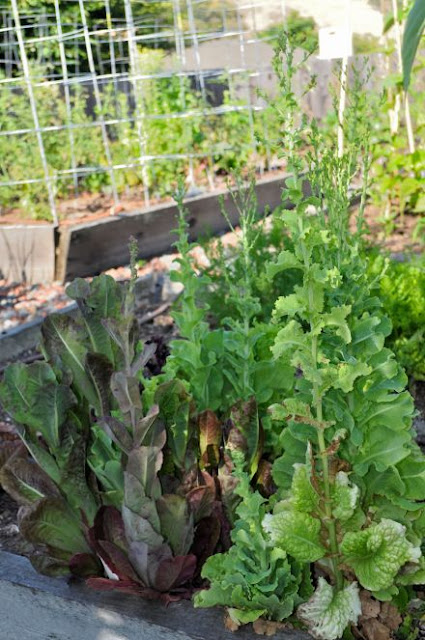 But if anything has shown holes in my gardening prowess it has to be the tomatoes.  They just are not growing. At least not compared to my neighbor Al’s – who is the king of the giant tomato! Last year it was the same story. This year, my garden is doing better that it was last year. The mulching with compost helps, as does the fish emulsion, the bat guano and the Dr. Earth fertilizer. But still those tomatoes are not filling up those big cages I bought for them. 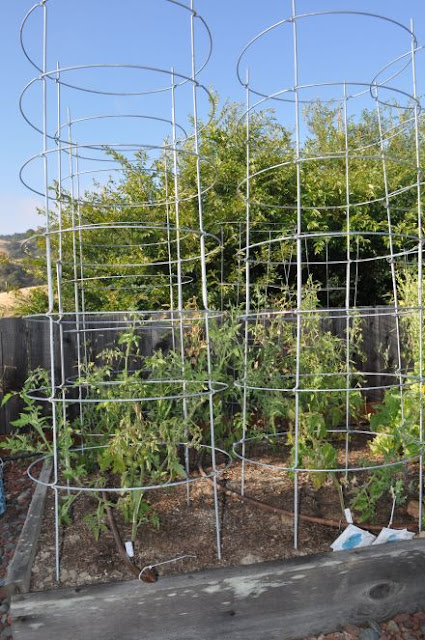 As I sat out by my tomatoes, with my Master Gardener Handbook open on my knee, I had a serious pep-talk with my tomatoes.

“Listen up guys,” I began. “What’s going on? I bought you the best cages I could find – beautiful Texas tomato cages, the biggest I could get and you hardly fill them.

“I’m giving you the best of organic fertilizers.

“I’ve taken a magnifying glass to search for russet mite and found none.

“If you had nematode worms you’d probably be in worse shape than this and you aren’t wilted.

“Sure you have a tiny amount of aphids but come on. Guys, I’m supposed to be a Master Gardener and you lot are making me look bad!”

I heard Al on the other side of the fence working in his yard. He’s probably one of the few people who won’t think it strange that I talk to my tomatoes. I asked him what he does with his. Perhaps he does amend his soil a little more than me. And his use of miracle grow will not cause that difference – nitrates are nitrates to the plants – they don’t care about the source of the molecule. But then he asked was I watering them enough.

“Oh yes,” I said, fairly confident that I had this one right. I see the damp soil every morning when I go out to say hi to my plants. It might be a dessert here, but my veggies are never denied water. So I replied, “thirty minutes, every morning.”

“Hmmm,” Al said, “I water mine for ten minutes every second day.”

Mystery possibly solved! I researched it a little more on the internet and found the symptoms for overwatering exactly describing my tomatoes.

“Over watered tomato plants can not take up iron. The leaves will start coming in pale green or yellow. The lower leaves will fall off and the plants will grow and fruit poorly.”

I’m so used to plants growing in the rain soaked soil of Irish gardens, that I panic a little at the scorching sun here and perhaps have overcompensated by giving too much water. I really hope that this is what is happening. The new watering regime kicks in today – fifteen minutes, three times a week. I’m happier to spend less on water, but I won’t believe it grows bigger tomatoes until I see it!

10 replies to It’s never that simple