In a panic to get my Roma tomatoes finally planted in soil, I hastily plopped them in amongst the struggling remnants of the winter veggies, such as the broccoli – which I’m still harvesting – though only enough for about one dinner a week.  I think I’ll let those blossom with a view to seed saving.  I was trying to keep a succession and I couldn’t see why winter veggies, grown in summer, don’t work here.  In it seems the better the weather, the bigger the veggies.  I reckoned that if I gave my winter veggies enough water they should just grow bigger with all that sunshine.  I wonder if that is how the first Irish settlers (“settlers” not the big red/brown dog – those are Irish setters!) felt about the climate when they tried to grow their crops.

I am surprised that the peas I planted in February aren’t happy.  They certainly haven’t thrived like the ones I planted in October that grew to about three feet high and fed us from December to April.   This picture was taken in February (with the old camera!). 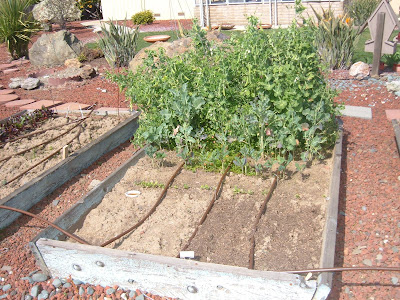 This picture taken today shows how much smaller the peas are. 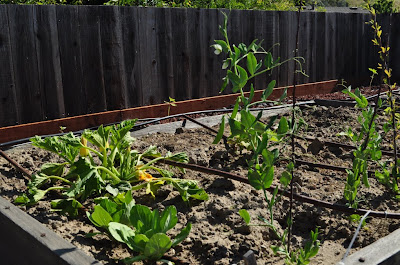 You can also see zucchini and pak choi planted here, and by the fence, a scrawny one of the two of my last remaining sunflowers!

As a biologist, I know there are other factors at play here.  The heat and sunlight closes stomata, the pores in the leaf, thus interfering with transpiration rates and gaseous exchange, slowing down photosynthesis.  Photo periods come into play too.  My winter veggies have proven to me that there really is such a thing as “too much of a good thing”!  Still, I hold high hopes for my spuds to be going year round…They look like eggs in a nest when you are digging them up – a sight that gladdens the heart of any Irishwoman! 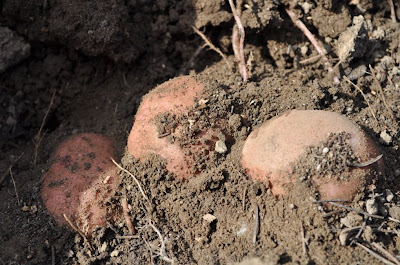 Because I haven’t been pulling out the winter veggies, my seven plots are really filling up.  I’d set out with great intentions to plan my garden.  I have a selection of drawings for the plots, mapping out where the water melon is going to go, where the best place for my pumpkins would be and how I’d set up my salsa garden (Mostly tomatoes, bell peppers and onions, as opposed to a place for Latin-American dancing!).  I know that it does resemble Egyptian hieroglyphics, but it made sense to me! 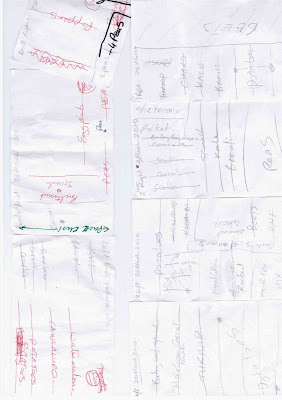 The gardening course suggested that I make out such a plan, so how did I miss the part about following it!

This is the reality.  In this shot there are peppers, zucchini, Roma tomatoes, summer squash, cantaloupe melon, a pak choi gone to seed, a lonely sunflower, and even the branches of the long gone cherry tree, used as pea stakes, are growing well! 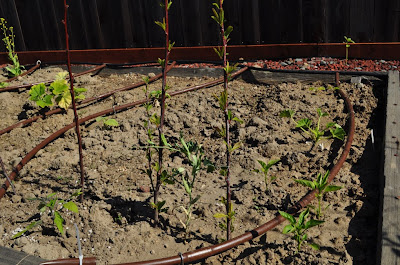 ,
I have a stray watermelon seed that germinated in my dill pot!  (I will transplant it…but where to?)   You can see that something has had a little nibble on it too – proof of organic gardening! 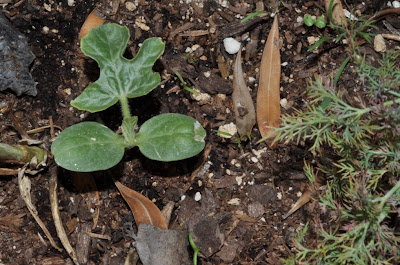 The pumpkins are still in seed trays, and I may have to be extra creative about where I plant those! 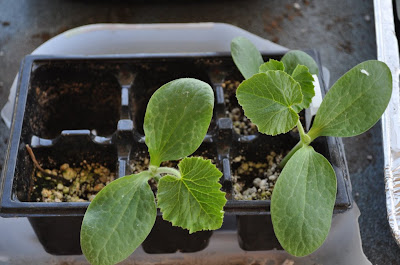 Some have been planted on a mini raised bed where I have tried to bury a privet as I didn’t have the tools, strength or inclination to dig out the stump.  A whole new twist on the term “lazy beds“.   What are the odds of this working? 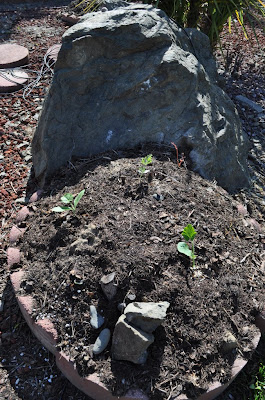 It does look like a grave complete with headstone – death of a privet – may it rest in peace, and not come back to haunt me!

I mixed up the different varieties of bell peppers I was germinating, so I don’t know what colors to expect the peppers to be, not only that, but they got mixed up with the egg plant seedlings – honestly, Mum, I had everything labeled, just like you taught me, but I took out the labels when I potted them up and forgot to put them back.  The labels are all sitting in a jar!  The egg plant and pepper seedling are different, and I’m hoping that I’ve figured out which is which, but still they are planted higgledy- piggledy all over the garden.  It’s my first time ever growing warm season plants, and I don’t know how to space them as I don’t know how big they’ll get. 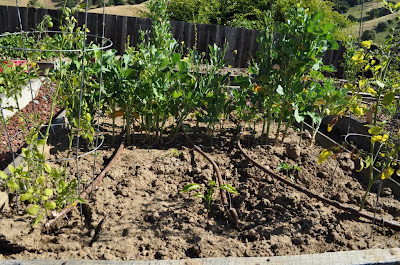 The one thing I can claim is that I do not have anything approximating a monoculture!

Here’s a challenge – how many different plants can you see in the picture below?  Answers on a postcard – actually, better than that – just leave a comment beginning with the words “I spy with my little eye..”!  List the ones you see – you get a point for each correct one and then I’ll post the answers next week with your scores.  If you have a blog, leave the link and I’ll post it alongside your score! 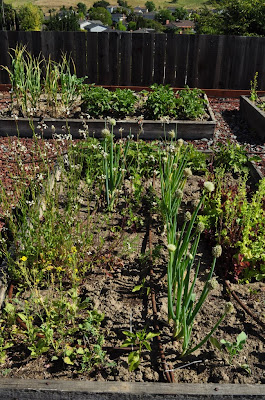 The chaos in the garden gives me palpitations!  I like order, and here I am trying not to dead head to encourage seed production and accept the bugs in the garden (only 3% of bugs are harmful – so that means that 97% are beneficial or benign at worst) so I don’t spray with pesticides.

I felt much better after I noticed that Garden Rant  posted in their manifesto as their third point “ …in love with rambling, chaotic, dirty , bug ridden gardens.”  Mine certainly qualifies!
Some of my friends have said they’ll read my blog to get tips!  I can only say that to date, my blog can tell you what not to do!  On the up side – my first cherry tomato has ripened!  This one has been grown in the sun-room – an experiment in succession! 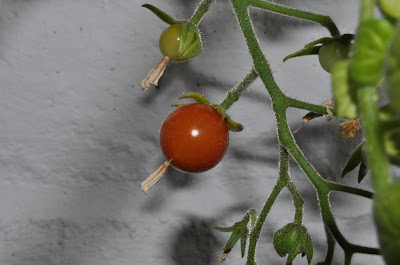